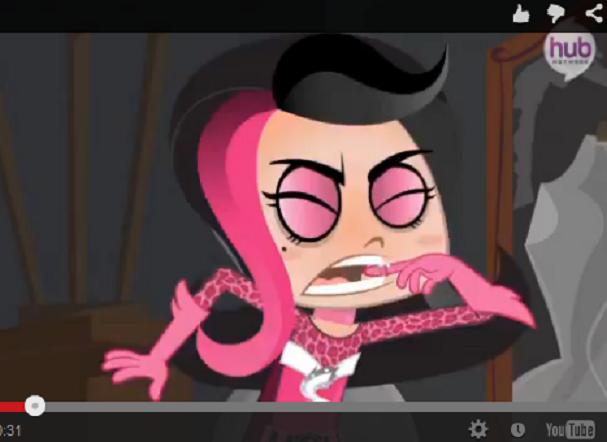 The kids cable channel, The Hub, has a new cartoon superhero they’d like to introduce to your kids. His name is Guy and he’s a 12-year-old boy – most of the time. When it’s time to save the world from evil, Guy dons a magical ring, utters the phrase, “You go girl!” and turns into SheZow, the female crime fighter.

Targeting the 11- and 12-year-olds in the audience, “SheZow” doesn’t specifically address the issue of transgenderism. (For example, there’s no mention of body parts appearing and disappearing.) But, the show does play up the discomfort that male character, Guy, feels when he changes into a female.

In an age where new toy companies like GoldieBlox are designing toys for girls that help teach engineering, construction and design concepts and build self-confidence, SheZow is loaded with some astonishingly blatant gender stereotypes. SheZow wears a purple skirt and cape, ‘her’ gloves and shirt are pink and ‘she’ wears white thigh-high boots. SheZow’s powers wane if ‘her’ hair is messy and the beauty products ‘she’ carries double as weapons.

“When I first heard about the show, my reaction was ‘Are you out of your minds?’” said Margaret Loesch, chief executive of the Hub. “Then I looked at it and I thought, ‘This is just funny.’”

SheZow pretends to teach children lessons about values, like why you shouldn’t steal and how to deal with jealousy, but the comments on IMDB.com tell the real underlying story: Progressive parents agree that SheZows transgenderism is a good thing for their children to experience.

“I think the gender angle of the show will be good for kids if left alone.”

“It’s quirky, genuinely funny and has good messages for kids.”

“I think it’s progressive and quite funny. The fact that a 12 year boy cannot save the world unless he’s in a pink costume meant for a female superhero is quite hilarious. And the fact that he will have to learn to embrace this embarrassing side-effect might actually be something good for kids to see. Maybe this is a cartoon who’s time has come.”

“I really like Shezow. What’s not to like. Lets remember who the target audience is, first of all; it is my daughter and her friends, not me. And She loves it. The colors are catchy and the jokes are cute. But what I really like about it is that I think ideally, it teaches tolerance and embraces the fact that there are no absolutes.”

“Initially wary of the position, Guy quickly adapts and becomes an incredibly competent hero, learning lessons and turning situations around in his favor. Furthermore, his distaste for all things ‘feminine’ and ‘girly’ fades away as he realizes how strong and capable he is with the added help of said items.”

“It is not until “Glamageddon”, an episode that explicitly deconstructs the socially constructed gender barrier concerning the concept of glamor, that both SheZow the show and Guy the character take a significant leap towards progress and greatness. From this point on, Guy embraces his role as a superhero with immense pride. He takes care to perform the actions required of him, including those society deems ‘weak’.”

The Hub kids’ channel is co-owned by Hasbro and cable programming giant Discovery Communications. It targets children between the ages of 2 to 11. The channel averages 56,000 viewers per day, compared to 934,000 viewer per day for Disney and Nickelodeon, but ratings are up 45 percent from last year and 75 percent from launch in 2010.

Perhaps if donned a sparkly skirt and purple cape and embraced his inner female he’d be able to knock out his competition with his lipstick.