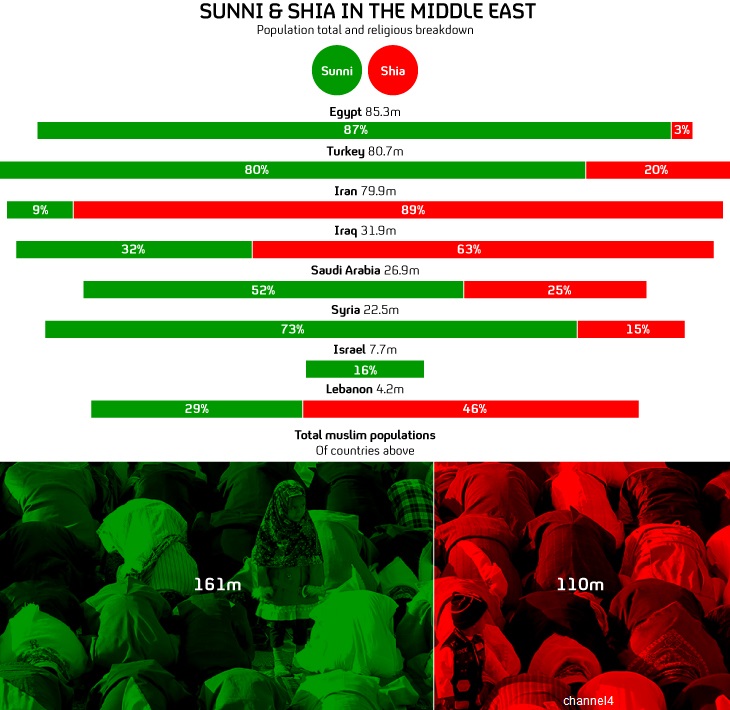 NewsRescue– The enemies of world peace, and mischief makers have finally successfully invoked a full scale potential war between “Sunni” and Shia Muslims in the Middle East. The war threatens to be one of the biggest and most protracted wars in human history.

From the beginning of the crises in Syria, the globalist media has been noted to have promoted the war as a sort of Shia(Alawite) action against Syria’s Sunnis. Whereas the Syrian cabinet and army is filled with people of all religious affiliations and not only al Assads personal, minority Alawite group. Such promotion of anti-Alawite sentiment and sectarianism of the war, was intentional—to facilitate the recruitment of fighters from around the world.

The globalist media and its sponsors, NATO and the US with their Middle East compatriots, Saudi Arabian leadership, the Qatari dictatorship and Turkey, have persistently utilized this image of a Shia/Alawite oppression, to recruit gullible youth, desirous of a true Jihad, from all over the world.

It has been reported that US late Ambassador Stevens was running one such youth recruitment mission in the Benghazi commission where he was killed. Promoting the war against the Syrian state as some sort of Jihad, quickly confuses jobless and money seeking youth, and with the steady flow of compensation for volunteering with the al Qaeda linked anti Syrian rebels, and quickly provided travel itineraries, youth have been flooding to Syria to die in the war.

Up to 100,000 Muslims have died so far in the war that has really not yet started. So far not a single pictural evidence of Syrian regime brutality has been provided to the global audience, in contrast, scores of episodes of al Qaeda brutality by the anti-government rebels have been viewed online. These include rebels using child soldiers, cutting and eating peoples hearts, using chemical weapons, pledging allegiance to al Qaeda and promising genocide and firing weapons into communities of civilians.

Since Hezbollah forces joined the war which has increasingly threatened the safety of their neighboring nation, tipping the balance of the war in favor of Al Assad, the mischievous elements have gotten ruffled in the territorial matters of Syria.

Yesterday for the first time in recent record, a Sunni meeting held in Egypt with Egyptian president Morsi in attendance. The meeting had clerics in Egypt label the Syrian war as a Jihad, with clerics like El Oreifi calling all Shia— infidels. The Egyptian president invoked all youth(except his children) to travel to Syria to join the al Qaeda rebels in war against the Syrian government. He also invoked Sunni material, physical and financial support.

The US president, Barrack Obama too decided to side with the rebels and terrorists in a “religious” war, pledging to send in hard-core weapons, including anti-tank missiles.

The brewed Sunni-Shia war, which has been used as a tool by the enemies of world peace, has spilled over into several neighboring nations. Rebels threatened Kuwaiti Sunni Muslims to either kill Shia in Kuwait, or face their wrath.

As Syrian government wages a strong battle to capture Aleppo, a strategic northern province, Russia, Iran and Hezbollah-Libya are on one side and the US, NATO, Turkey, Qatar, Saudi Arabia and now Egypt, are on the other side of potentially the most disastrous war we will witness; a war that promises to leave millions of deaths and permanent instability and chaos on not just the Middle East, but around the world. World War III appears to be the wishes of these people, and in the works.