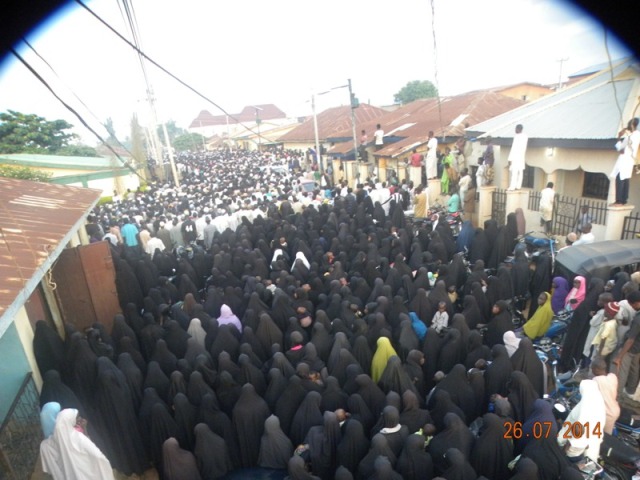 YAOUNDÉ, Cameroon—Walking from classroom to classroom at the Ahl ul Bayt Linguistic Center, which teaches Arabic and Islam, director Ahmed Tijani pointed at his students, a mixture of teens and young adults.

“This one is Shiite, these ones are also Shiite,” he said. “And these ones, they are still Sunni.”

Mr. Tijani, whose office in the Cameroonian capital is decorated with an Iranian flag and a poster of Iran’s Supreme Leader Ayatollah Ali Khamenei, was also once a Sunni Muslim. Then he made the life-changing choice of enrolling at a similar Iranian-funded academy in the coastal city of Douala.

Since converting to Shiite Islam a decade ago, the 39-year-old educator has risen through the ranks, establishing this school in Yaoundé and even visiting Iran on a government-sponsored trip in 2012.

“There is a big difference between Shiite Islam and Sunni Islam,” he said. “Only the Shiites are spreading the truth.”

Such sectarian talk used to be exceedingly rare in much of Africa. So were actual Shiites. The few who could be found in Africa belonged to immigrant communities from Lebanon or the Indian subcontinent. Now, parts of the continent’s Sunni Muslim heartland are living through the biggest wave of Sunni-to-Shiite conversions since many Sunni tribes of southern Iraq adopted Shiism in the 19th century.

Hard figures are difficult to come by. But in Nigeria alone, Africa’s most populous nation, some 12% of its 90-million-strong Muslim population have identified themselves as Shiite in a recent survey by the Pew Research Center, up from virtually zero in 1980. The number is 21% for the Muslims of Chad, 20% for Tanzania, and 8% for Ghana, according to the survey.

That demographic change is occurring just as the Muslim world becomes increasingly polarized along sectarian lines, with Saudi Arabia, a self-proclaimed standard-bearer of the Sunni cause, engaged in proxy struggles from Yemen to Syria to Bahrain against a rival axis led by Iran’s Shiite theocracy.

“The core of the Saudi-Iranian confrontation over power and territory is in the Middle East. But West African Shiites are of symbolic value to Iran, for it to be able to say that its vision of Islam is expanding rather than shrinking. They give Iran more of a claim that they’re able to speak for Muslims in the whole world,” said Vali Nasr, dean of the School of Advanced International Studies at Johns Hopkins University and author of a book on the Shiite revival.

Pushing back, the Saudis have already pressed some of Iran’s erstwhile African Muslim allies to sever ties with Tehran, curb Shiite conversions and join Riyadh’s “antiterror coalition.” One of these countries, Sudan, in recent months went as far as sending troops to fight, under Saudi command, against the Shiite Houthi militia in Yemen.

The Shiite wave in Africa kicked off with Iran’s Islamic revolution in 1979, a revolution that initially played down Shiism and sought to unite all Muslims under its banner. One of the early followers was Sheikh Ibrahim Zakzaky, a preacher from the northern Nigerian city of Zaria who adopted Shiite Islam after a stint in the Sunni Muslim Brotherhood.

Nigerian Shiite cleric Saidu Abdulhamid, then a 10-year-old in Zaria, recalls seeing a rambunctious street protest led by Mr. Zakzaky and joining his group, the Islamic Movement in Nigeria.

“People support the revolution in Iran 100%. They saw how Ayatollah Khomeini brought justice and made everyone equal. And every human being likes justice,” said Mr. Abdulhamid. “But in Nigeria, every president, once he becomes president, his first enemy is the Shiites.”

Relations between Nigeria’s Shiites and the government indeed worsened dramatically after President Muhammadu Buhari, a Sunni Muslim, replaced his Christian predecessor in May 2015.

Hundreds of Shiites died last December, in clashes that followed what the government said was an attempt by a Shiite mob to assassinate Nigeria’s army chief of staff. Mr. Zakzaky, whose sons died when the army opened fire on Shiite crowds, has been behind bars since then. His continued detention has turned into a cause célèbre for Iran and Shiite movements world-wide.

The vast majority of Sunni Muslims in Nigeria and other countries of sub-Saharan Africa follow the mystical Sufi tradition that abhors the kind of radicalism spread by Boko Haram or the ultraconservative Islam promoted by Saudi Arabia. But even these Sufi leaders are increasingly worried by the Shiite penetration.

For ordinary Sufis, conversions to Shiism are relatively easy because the Sufi tradition venerates the family of Prophet Muhammad, explained Sheikh Abdadayim Abdoulaye Ousman, a Sufi cleric who oversees Chad’s Supreme Council of Islamic Affairs. Discord over whether the prophet’s son-in-law Ali and his descendants should have inherited the leadership of the Muslim world, as the Shiites believe, caused the initial 7th-century schism with the Sunnis.

“We must be vigilant,” Mr. Ousman said, adding that repeatedly refused entreaties from Iranian institutions to establish Shiite schools or mosques in Chad.

“If we allow them to set foot here, we’ll be finished because they have the financial means. And the Sufis will easily rally to them because they love the family of Ali.”