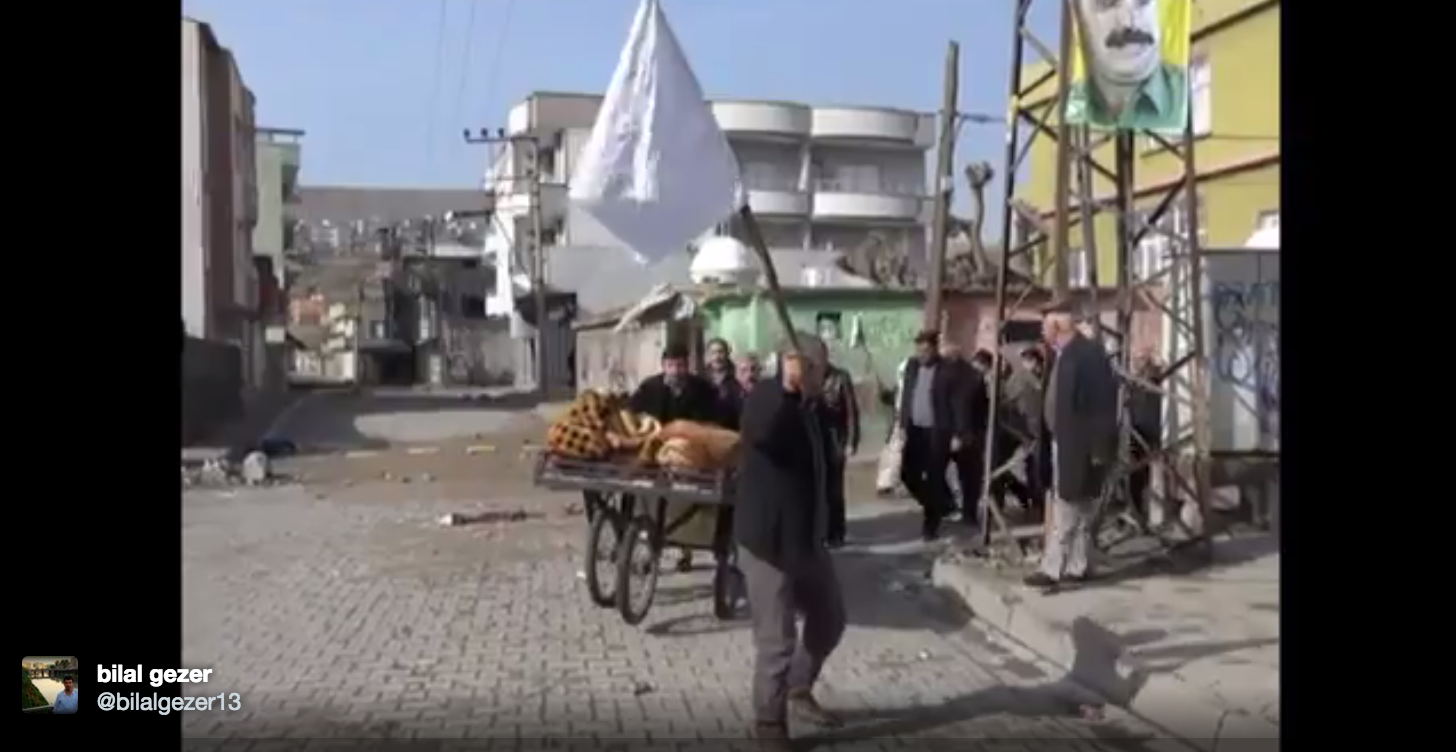 An incident in which several civilians with a white flag came under fire has been caught on camera. The victims are reported to be Kurds in the town of Cizre, where they were allegedly shot at by Turkish troops.

The series of short video clips published on social media shows a procession of people going along a street, pushing a cart with what appears to be two covered bodies. The walls of the buildings are dotted with holes, possibly from bullets. A tank is shown in the distance.

Then, gunfire can be heard as the people hunker down and run for cover.

Other footage shows several people lying motionless on the ground with blood spilling from them, as gasps and screams of horror come from the background.

Aftermath, of the shooting of Kurds in Cizre by Turkish security forces. – GRAPHIC @arahmangok. pic.twitter.com/eLOk34M61h

The stated location is the Kurdish city of Cizre, which appears consistent with the Turkish-language graffiti shown in the video and the ice cream shop of the ‘Algida’ brand – which is only sold in Italy, Eastern Europe and Turkey.

RT could not immediately verify the circumstances of the shooting. One version claims that the Kurdish civilians were shot at by Turkish troops involved in a crackdown that Ankara is currently conducting in the south and south-east of the country.

Another version suggests that Kurdish militants were among the ranks of the civilians and opened fire at the Turks, provoking a response. The footage doesn’t appear to show any armed people in the crowd.

The Turkish government in August launched a military operation in Kurd-majority areas, imposing curfews and clashing with fighters of the militant Kurdistan Workers’ Party (PKK), which is considered a terrorist organization in Turkey. At least 150 civilians and hundreds of fighters on both sides are thought to have died in the conflict.

The crackdown was criticized by international human rights organizations as disproportionate and a form of collective punishment against the Kurds. This week Amnesty International said Ankara is imperiling 200,000 people living in the areas affected by disrupting basic services, blocking their freedom of movement, and conducting firefights in residential areas.