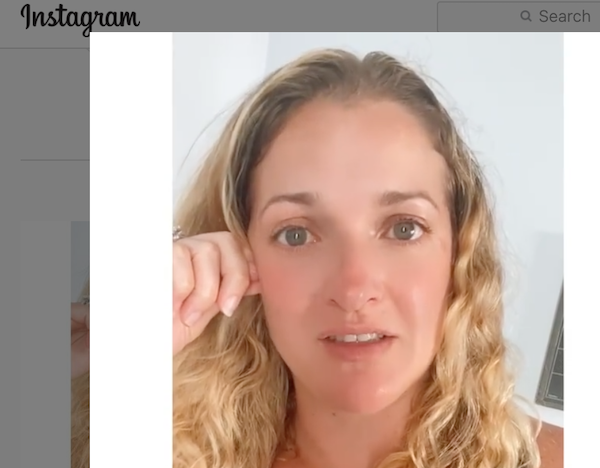 Brittany Galvin a 35 year old Florida mother who first came to public light when she posted pictures of alleged magnetism post-receiving the Moderna vaccine, has now detailed a long and dreadful battle with Guillain-Barré syndrome and other conditions which ‘her doctor linked to the vaccine.’

Guillain-Barré syndrome (GBS) is an acute, immune-mediated polyneuropathy that leads to severe weakness and may result in need for artificial ventilation.

In a video clip on her social media handle and an interview with #StewPeters, Brittany narrated how her symptoms started actually after her first shot when she said she first noted symptoms of heaviness and unsteadiness with her legs. She said this started hours after the first shot but went away within 2 days.

She accounted how after her second shot 14 days after the first one, she first did notice anything and then the symptoms started 13 days later when she seized out with a pounding head and other presentations. She called 911. And audio clip of the call was included in the video clip she made.

She has had several visits to the hospital, had dozens of tests including CTs, MRI, Lumbar puncture and so many tests. Initially she said she was only diagnosed with pericarditis till the neuro team visited. Brittany said it was finally the neuro team that linked her condition to the Moderna vaccine shot. She said her neuro doctor said he will report it to the VAERS, adverse effect government website. She said she herself has personally reported it and received an acknowledgment.

“Acute Guillain Barre with primary small fiber involvement” with ‘loss of reflexes at ankles and knees.’

She said her neurologist said he had seen this before in vaccinated patients.

“Brittany’s neurologist unequivocally said that her reaction was due to the Moderna shot. Not only has she developed leg numbness or paralysis, but POTS (positional tachycardia) and myocarditis (heart inflammation). These are life threatening conditions.” Source

While admitted, Brittany posted clips on social media, many of which showed her still being able to stick metals to various parts of her body. She said social media kept blocking many of her posts of what was happening to her body and she also received a lot of support but also insults from the public and so-called social media influencers.

After an extended period on admission, she said with her neural diagnosis she was treated with Intravenous immunoglobulin (IVIG), she was finally released and has been learning to walk again.

Displaying tons of medications given by doctors who she said did not talk to each other, she said she decided to abandon all the medication and went to check in for natural therapy with a center in Tampa, which included light therapy and daily IVs.

Recent studies have linked spike proteins on the Covid virus and in vaccines to autoimmune diseases and other toxic effects on the body and possibly to the development of long-haul post covid and post vaccine syndromes.

Concluding Brittany said “people like me are real and there are a lot of us and we just want to be heard.”