She is 60years old, an old and tired woman that required to be pampered and taken care of, but unfortunately she had to die from the claws of corruption in the hand of a police officer named ASP Ibrahim Bala of the Delta state police command.

This tired old woman referred to as ‘Dadaji’ was from Hardawa in Misau local government area of Bauchi state.

Her son, Adamu Idris was a ‘suspect’ of kidnapping and have been since last year under custody in Agbo prison. Though, this remains not our concern but the placing of this old woman with her hard earned money.

The son of this old woman knew ASP Ibrahim Bala before he was arrested, they were casual friends, so, he leveraged on that and discussed the way out with the ASP, the ASP demanded for money, this was the ‘why’ the son in custody of the police had to connect him with his mother so as to negotiate and see how the old woman can pay the money.

This old woman went on rampage to get that money, sold most of her inherited plots of farm lands so as to secure the release of her son whom ‘she’ believed was harmless.

The first installment of 380,000 was paid through some cronies or preferably you call them agents by name Sani Maitaba who is also a friend to the ASP and Muhammad Dan Niger. The total money sent was 400,000 but they claimed they gave 20,000 to her son while in police cell. Another 198,500 was equally paid through his bank account number.

The 198,500,00 was credited into ASP Ibrahim Bala account with FCMB by Abdullahi Idris who is senior brother to Adamu Idris at FCMB Azare branch, Bauchi state On 22 March 2017.

ASP Ibrahim Bala convinced the old woman with the notion that the IPO (Investigating police officer) was his boy and can influence the release of her son.

This ASP together with his agents collected so much money from this old woman to the extent that they told her that the Commissioner of police Delta state, CP Ibrahim Zanna have requested for the payment of 600,000 thousand naira as a final settlement.

Immediately this old woman came back home, her last words were ASP Ibrahim Bala’s name, she couldn’t say anything anymore because her HEART erupted inside out, she died instantly. Senator Isah Hamma Misau must come in to fight and ensure justice is done to this woman family members.

Attached here is the bank FCMB pay inn slip with the recorded amount, this is enough to investigate this bad bean amongst the many good Nigerian police officers, they should root him out and place him on the stake, otherwise, the blood of this old woman will not let any of the ‘guilty’ to sleep. 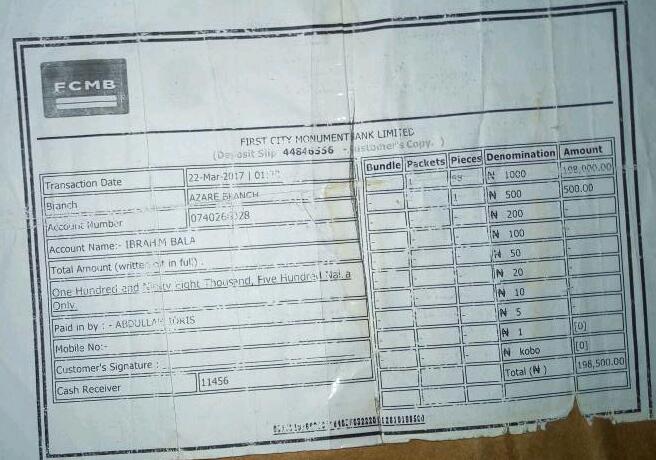