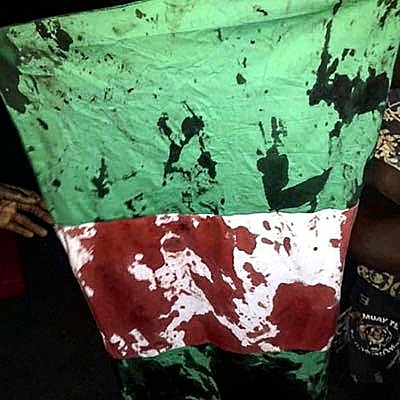 Irrefutable and undeniable evidence has emerged from world famous rapper Davido’s cousin, Tunji Adeleke aka Tunegee, proving the Lekki massacre of the evening of October 20th in Lagos Nigeria, was premeditated and planned by the Nigerian authorities ever before it happened.

In what has now started getting viral, two tweets sent out at 5.42pm Nigerian Time/12.42pm US Eastern Time, an hour before the massacre, categorically detailed the events to come and attempted to warn Nigerians ahead of it.

Mr. Tunji Adeleke, who goes under the Twitter handle @Tunegee, sent out the two tweets below with the message:

Classified information from the office. Please anyone at the Lekki toll gate, leave. They plan to clean up the youth, might end up in deaths, and it would be like nothing happened tomorrow morning. ( 1 )

They are also switching off the cameras and the wiring/lighting at the Lekki toll gate and they plan to bombard and attack them in the nighttime. There have been instructions from above to do so. Let’s be very vigilant. ( 2 )

The Time stamps on these tweets makes the evidence irrefutable!

They are also switching off the cameras and the wiring/lighting at the Lekki toll gate and they plan to bombard and attack them in the nighttime. There have been instructions from above to do so. Let’s be very vigilant. ( 2 )

Note: the time zone used here is from our editor in New York, 5 hours before Nigeria time. This will correspond to 5.42pm Nigeria time. Also view the conversation of friends and twitter users who saw the tweet that date.

The lights are off, the soldiers are already on their way, please Leave Alausa NOW!!!! #EndSARS

Nigerian army seized some of the corpses of people they shot. RT let the world see this #EndSARS

Also view conversations on twitter today about this astounding revelation:

While we do not know what office Tunji works from and hope he is in hiding, Tunji’s tweets above show evidence of the value of Social media and why freedom of information dissemination should be strongly protected and never inhibited, especially in the third world countries like Nigeria, with reckless, deadly corrupt and inhumane leadership. Had his tweets gone viral early, perhaps attention would have been drawn and the massacre prevented.

The Lekki massacre followed this exact pattern in Tunji’s warning tweets, which has sadly also been General Buhari, president of Nigeria’s signature Rule of Engagement, RoE: Military deployment, massacres and carting away of the bodies to secretly mass bury them.

Chief of Army Staff, General Tukur Buratai conducted one such massacre in December of 2016, the year Buhari took office, with the administration admitting to burying 347 massacred Nigerian youth in Mando cemetery, Zaria.

The same pattern was observed after to 2017 Abia massacre where it was found that 100 massacred Igbo youth were carted off and secretly mass buried in a military cemetery in Onitsha. The pattern has repeated it self over and over under Buratai’s command as catalogued in our previous article with main stream media sources.

While the Nigerian government and its agents continue to deny the events of Black Tuesday, families have since posted pictures of their missing loved ones who were at the Lekki civil protests.

Another piece of evidence showing premeditation in the recent Lekki massacre, was a video tweet by another twitter user right as the troops left the barracks in Victoria Island headed to the massacre. See:

The Nigerian government has also unleashed a billion naira run hungry youth disinformation campaign, attempting to bury the horrific evidence of the matter in a storm of fake news posts and fake images to make everything seem fake. The BBC had to denounce one such propaganda as below in our arcicle: NewsRescue-BBC Denounces Propaganda by Nigerian Govt Agents Claiming British Media Apologized for #LekkiMassacre Reportage