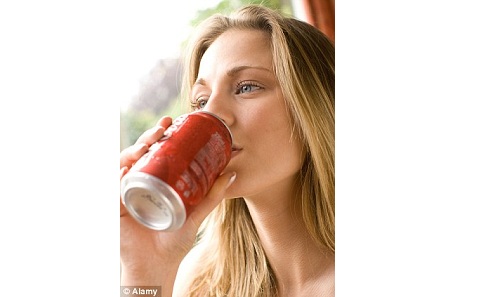 Once upon a time, fizzy drinks were an occasional luxury treat.

Now, many of us think nothing of having at least one every day — maybe a lunchtime can of cola or a ‘natural’ lemonade from Pret.

We use them as instant pick-me-ups, and even as ‘healthy’ sports aids bought from vending machines at the gym.

No trip to the cinema is complete without a supersize soft drink, either.

It’s no surprise to learn, then, that our consumption of soft drinks has more than doubled since 1985 — from ten gallons per person a year to more than 25 gallons.

We know this is not entirely good for us — but could sugary soft drinks be so dangerous that they should carry health warnings?

This may sound alarmist, but new medical studies are have produced worrying results.

Even moderate consumption — a can a day, or just two a week — may alter our metabolism so that we pile on weight.

The drinks also appear to increase the risk of heart disease, liver failure and hypertension.

In children, soft drinks have been linked to addict-like cravings, as well as twisting kids’ appetites so they hunger for junk food.

Already, countries such as Denmark and France are introducing soft-drink taxes to cut consumption.

In the U.S., around 100 medical and consumer organisations are now calling on the Surgeon-General to investigate the health effects of soda and other sugary drinks.

Sugary soft drinks come in numerous guises — from ‘innocuous’ fizzy elderflower to ‘health’ drinks such as Lucozade and ‘sports’ beverages like Gatorade.

Last year, we swallowed an astounding 14,585 million litres of soft drinks, an increase of more than 4 per cent in 12 months, according to the British Soft Drinks Association.

We clearly like our soft drinks. But the medical evidence is stacking up against them.

Last week, a study suggested they can cause weight gain and long-term health problems if drunk every day for as little as a month.

The research, by Bangor University and published in the European Journal Of Nutrition, reported that soft drinks actually alter metabolism, so that our muscles use sugar for energy instead of burning fat.

It seems that exposure to liquid sugar causes genes in our muscles to change their behaviour, perhaps permanently.

Not only do we pile on weight, but our metabolism becomes less efficient and less able to cope with rises in blood sugar, say the researchers.

This, in turn, increases the risk of type 2 diabetes. ‘Having seen all the medical evidence, I don’t touch soft drinks now,’ says Dr Hans-Peter Kubis, a biological scientist and expert in exercise nutrition who led the research.

‘I think drinks with added sugar are, frankly, evil.’

In fact, the Bangor study is only the latest in a long line of reports warning of the link between soft drinks and serious health problems.

A study in March, for example, warned that men who drink a standard 12oz can of sugar-sweetened beverage every day have a 20 per cent higher risk of heart disease compared to men who don’t drink any sugar-sweetened drinks.

The research published in the American Heart Association’s journal, Circulation, followed more than 42,000 men for 22 years.

The study suggested this may be a result of the sugar rush these soft drinks cause.

This increased sudden sugar load on the body may also explain research which found just two carbonated drinks (330ml each) every week appears to double the risk of pancreatic cancer, reported the journal Cancer Epidemiology, Biomarkers and Prevention.

Meanwhile, soft drinks with high levels of fruit juice may cause severe long-term liver damage, according to an Israeli study.

People who drank two cans of these drinks a day were five times more likely to develop fatty liver disease — a precursor to cirrhosis and liver cancer.

In the Journal of Hepatology, the lead investigator, Dr Nimer Assy, warned high levels of fructose fruit sugar in the drinks can overwhelm the liver, leading it to accumulate fat.

Perhaps most disturbing is the picture emerging from various studies that suggest sugary drinks expose children to a perfect storm of obesity threats.

The study of 346 children aged around 11 found drinking soft drinks makes them want to drink more often, even when they’re not actually thirsty — and that their preference is for more sugary drinks.

Children who drank water or fruit juice in the tests didn’t show this unnecessary need to drink.

The researchers expressed concern that this may set the children’s habits for life — in particular, giving them an ‘increased preference for sweet things in the mouth’, without compensating for the extra calories by eating less food.

Part of this worrying phenomenon was revealed earlier this year by Oregon University investigators.

Their study of 75 children aged between three and five found those given sugary soft drinks avoided eating raw vegetables such as carrots or red peppers, but went for foods high in calories, such as chips.

This did not happen when the children were given water to drink.

The researchers said this wasn’t about simple fussiness. Instead, our tastes for food and drink seem to be shaped in a like-with-like manner.

This discovery comes on top of an earlier finding, by heart experts at St George’s, University of London, that children and teenagers who consume sugary soft drinks are far more likely to prefer foods high in salt.

Dr Kubis believes that liquid sugars not only alter our bodies, but also foster addict-like responses.

‘The body absorbs liquid sugars so much faster because they are more easily taken into the stomach lining, and this rapid intake fires up the body’s pleasure responses,’ he says.

‘At the same time, your brain reduces its desire for the taste of nutrients such as vitamins or minerals,’ says Dr Kubis. This is what makes these sugary drinks so habit-forming.

‘There is a huge overlap between what is addictive behaviour with drugs and the use of sweet food,’ he adds.

‘In lab experiments, even rats who have been made addicted to cocaine will prefer to have a sugary drink instead of cocaine.’ He says sugary drink habits aren’t necessarily an addiction ‘because not all of us suffer withdrawal symptoms when we cut out sugary drinks’.

The story may be different with children, however. ‘With children, there is more evidence of addictive behaviour,’ Dr Kubis says.

‘You get tantrums, restlessness  and distress if you stop their soft-drink consumption.’

‘Posh soft drinks with real fruit might be marketed as healthy, but this may be rather cynical, as such drinks can be just as dangerous,’ he explains, adding that some fruit drinks contain more sugar than a can of fizz.

Even when it comes to ‘healthy’ sports drinks, the evidence is that they’re not only a waste of money, because you don’t need them, but they could also be harmful.

An investigation by the universities of Oxford and Harvard warned that popular brands such as Lucozade and Powerade contain large amounts of sugar and calories which encourage weight gain, the British Medical Journal reported earlier this month.

On top of all this is the damage fizzy drinks can wreak on teeth. A study in the journal General Dentistry in June found that cola is ten times as corrosive as fruit juice in the first three minutes of drinking.

One of the chief culprits is citric acid, which gives tangy drinks their kick.

A study in the British Dental Journal found four cans of fizzy drink a day increased the risk of tooth erosion by 252 per cent.

The drinks industry, of course, has spent countless millions of pounds bombarding us with sophisticated and expensive marketing in order to weld their products in  our minds to images of healthiness and fun.

Few who lined the streets of Britain for the Olympic torch procession could have failed to notice the role of Coca-Cola.

The company paid more than £100 million for the exclusive rights to be the official provider of soft drinks at the Games.

The late Coca-Cola chief executive, Roberto Guizueta, said: ‘Eventually, the number-one beverage on Earth will not be tea or coffee or wine or beer. It will be soft drinks — our soft drinks.’

Today, however, there is a growing backlash against soft drinks.

Earlier this month, a group of leading health organisations, including the American Cancer Association, the American Diabetes Association, Yale University’s Rudd Centre for Food Policy and Obesity, and the American Heart Association, called on the U.S. Surgeon-General to investigate the health effects of soda and other sugary drinks.

Soft drinks play a major role in the U.S.’s obesity crisis, the campaigners say, and they want a study into them similar in scale and impact to the Surgeon-General’s landmark report on the dangers of smoking in 1964.

Kathleen Sebelius, the former Governor of Kansas, who campaigns on behalf of the American Cancer Society, declared: ‘An unbiased and comprehensive report on the impact of sugar-sweetened beverages could . . . perhaps begin to change the direction of public behaviour in their choices of food and drinks.’

Legislators are already starting to act. In May, New York Mayor Michael Bloomberg, announced a ban on serving cartons bigger than 16oz (a pint).

Last year, the Hungarian government imposed a tax on unhealthy drinks and foods.

And, earlier this year, France imposed a tax on sugary soft drinks after a study found that more than 20 million of its citizens are overweight.

Health campaigners here are pressing for a similar tax. Researchers at Oxford University calculate that a 20 per cent tax on soft drinks would reduce obesity and overweight in Britain by 1 per cent — roughly 400,000 cases across Britain.

‘We don’t get anything like that  level of success from trying to educate people about healthy eating,’ says researcher Dr Mike Rayner.

‘I am not suggesting that people should never have soft drinks,’ he stresses. ‘I myself like drinking them. But they really should be restricted to weekends and  holiday treats.’

Understandably, the idea of a tax has met stiff opposition from the British Soft Drinks Association.

Its spokesman, Richard Laming, argues that ‘soft drinks, like any other food or drink, can be consumed in moderation as part of a balanced diet, and there is no reason to tax them’.

On top of that, he says, UK soft drink manufacturers are producing more low-sugar products.

‘About half of the soft drinks market in the UK is made up of reduced or zero calorie drinks nowadays.’

‘The study lasted only four weeks and had only a tiny sample size of just 11 people. That is no basis on which to make claims about effects that last a lifetime.’

Dr Kubis acknowledges the study’s limitations and says that he is working to produce a much larger trial to see if the findings are confirmed in people who start consuming large amounts of sugary soda.

In this, he faces one significant problem.

‘It is difficult to find young people who have not previously been exposed to a lot of soft drinks,’ he laments.