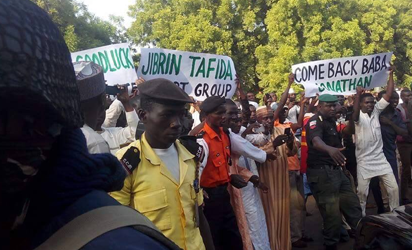 Pro-Democracy group, the Wailing Wailers, Friday, asked President Muhammadu Buhari to honorably resign, saying yesterday’s incident in Sokoto, where placard-carrying residents mainly youths asked the visiting ex-President Goodluck Jonathan to ‘come back’ was an indication that “he (Buhari), has been rejected by the same people who massively voted him in in 2015.”

The group in a statement in Abuja, by its Acting National Publicity Secretary, Usman Abubakar, decried that given the lingering economic woes, as well as the rising inflation rate, it was glaring that President Buhari doesn’t have solution to the nation’s problems.

Recall that Jonathan had visited Sokoto State to pay a condolence visit to the family of late 18th Sultan of Sokoto, Ibrahim Dasuki.

The late Sultan is the father of the incarcerated ex-National Security Adviser, Col. Sambo Dasuki, who served under ex-President Jonathan.

The statement read: “We are calling on President Muhammadu Buhari for the second time within the week to honorably resign and return back to his farm in Daura for retirement.

“It is glaring that Mr. President does not have any solution to the lingering economic woes, hardship and suffering that has befallen the country. We cannot continue to take it that all is well when the economic situation in the country is critically disastrous.

“Just days ago, reports showed that Nigeria’s inflation has risen to 11 years record breaking 18.3%. In the history of Nigeria, the last time we experienced hyper inflation, depression, recession and famine was when Buhari brutally upset a civil rule and took over powers in 1984.

I travelled to Sokoto this afternoon to condole with the family of the late Former Sultan Alhaji Ibrahim Dasuki and the current Monarch pic.twitter.com/M1iY4pUeh1

“The repeat of 1984 brutal and violent rulership is panning out in 2016, it is quite unfortunate that students of history jettisoned all they knew about Buhari and packaged him as a reformed democrat. We are happy in a way that all those that propped him up and elevated him to Aso Rock are now in deep regret.

“Those that supported him out of ethnic and religious sentiments are now aware of the gravest mistake as Hunger, Starvation and poverty does not respect ethnic group or religion, but, it is being exerted on all and sundry. It is in evidence that Nigerian people are totally ill-fated with Buhari.

“This is why we are calling out that Mr President should tow a very noble and honorable path by resigning and hand over powers to the National Assembly.

“This was obviously demonstrated when the former President of Nigeria, Dr Goodluck Ebele Jonathan paid a condolence visit to sympathize with the family of the late Dasuki, in Sokoto State. It is on reports that the residents thronged out in their thousands with placards chanting “Baba Jonathan Please Come Back.”

I thank the Dasuki Family, the Sultan, the Government and the good people of Sokoto State for their warm welcome and wonderful hospitality pic.twitter.com/oqsh4EctWn

“Time is fast spent, the economy is chattered beyond redeemable levels and the entire system is in tatters. we enjoin all Nigerians to rise up from docility and demand for #BuhariMustGo.

“Leadership should not be a do or die affair, it should not also be a matter of forceful foisting of oneself on Nigerians as though we do not have rights to demand for removal or impeachment of a failed president.

“We are making this call because we want Nigerians to begin again to experience good economy devoid of recession and spiral downturn and wide spread of poverty.”

“Nigerians do not deserve alarmists, propagandists and genocidists to seize the leadership of this great country. We must look for noble men of worthy characters to lead our nation.

“We are also using this medium to sensitize Nigerian youths to rise up in unity to the occasion and begin to think of replacing some of the old people who want to perpetuate themselves and their lineage in power. If they say the youths are the leaders of tomorrow, the question is, when will the tomorrow be? If youths themselves sit back without taking action? Now, we declare that tomorrow is now and Nigerian youths must now arise in strength for the good of our people and the nation.