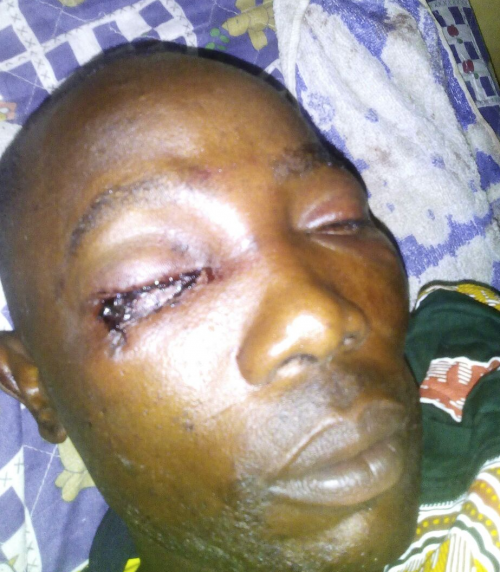 Private Ihama Osaretin, based in Myoung Barracks in Yaba, Lagos State has been identified as the soldier who punctured the eye of Segun Enikuemehin, a member of the Federal Road Safety Corps (FRSC). The harrowing attack in which Mr. Enikuemehin lost an eye took place on August 14, 2016.

Since the assault, the victim and his family have solely borne the financial burden of Mr. Enikuemehin’s medical treatment. Meanwhile, Major General Isidore Edet, the General Commanding 81 Division, said through the division’s assistant director of Information, that the board of inquiry investigating the assault would meet for three weeks. The military statement did not offer any financial help for the victim’s treatment.

Mr. Enikuemehin has undergone a series of treatments, and he is scheduled for major surgery at the Lagos State University Teaching Hospital (LASUTH) on Friday, August 19, 2016.

The doctors at the hospital have told the victim that one of his eyes has been totally damaged, but the medical team has also pledged to try to salvage the second eye.

In one of the latest twists, a military source claimed that one of the soldiers who took part in the assault on Mr. Enikuemehin was stabbed, and is currently receiving treatment at LASUTH. However, an anonymous police source told SaharaReporters that no soldier was stabbed at the scene of the assault.

The police account was corroborated by another source who was present when two military police officers, Captains Akinyemi and Mbakwe, visited LASUTH to see a stabbed soldier. The source revealed that the stabbed soldier told the mobile policemen that he was not at the scene of the assault, but that he was ambushed by three men and stabbed on his way to visit a relative.

The Nigerian Army said some soldiers arrested by the police during the bloody melee were handed over to the military on Tuesday. However, SaharaReporters learned that it was only Private Ihama who was seized by the residents and handed over to police officers at Adekunle police station. Our sources revealed that Private Ihama was on Monday released to Captain Okolo.

A military source stated that eight of the soldiers at the scene of the savage assault were being held in military custody as investigators seek to identify others who participated in the violent acts. Victims and eyewitnesses at the scene of the assault told our correspondent that nineteen soldiers took part in the assault. Mr. Enikuemehin’s relatives told SaharaReporters that some military officers visited the victim and asked him several questions regarding the assault.

At the scene of the melee, some eyewitnesses told our correspondent that the soldier who attacked three residents and punctured Mr. Enikuemehin’s eye was a friend of three brothers who reside in the area. The relatives were identified as Efenus Idowu Yayagbene, Waribi Yayagbene, and Tobue Yayagbene. The eyewitnesses said Waribi Yayagbene owns a beer parlor frequented by soldiers. They added that the bar owner’s brothers, Efenus and Tobu, are military recruits who joined in the attack on Enikuemehin.

Several eyewitnesses stated that the assault was began when one of the soldiers at the bar demanded that a man identified simply as David should produce camouflage shorts he had worn about three weeks ago. Speaking to our correspondent, David said he told the soldier that he no longer owned the camouflage shorts, but the soldier was adamant that he should bring it.

“They started beating me because I could not give them the knickers [shorts],” said David, adding that the pair of shorts was not even a military uniform, but was black and white camouflage.

The chairman of the Community Development Association (CDA), Taye Ikuejamoye, told our correspondent that soldiers frequently beat up innocent civilians in the community.

A police officer at Adekunle Police station corroborated the claim. “Many times, we received reports of soldiers beating up boys in the area. With this latest one, may be the military authorities will punish the soldiers involved. At least the community will know rest a little,” said the police officer.

The officer, however, said he was afraid that the military might shield the culprits who attacked civilians on August 14. He said the police acted wisely in releasing the main culprit to military authorities, adding that, if they had decided to keep him, soldiers might have descended on the police station in a wrecking rage. He pointed to what happened to Area C police station when soldiers burnt down the station in a clash with the police.