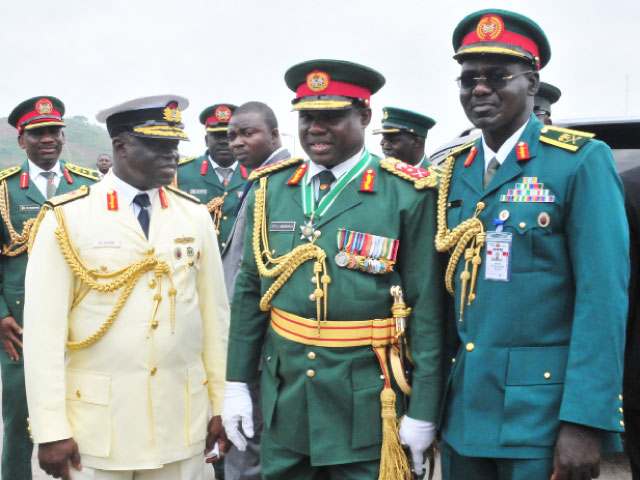 The Station Manager of Forte Oil former African Petrol (AP), Alhaji Auwulu Hassan was on Saturday night beaten up by unidentified soldiers in Damaturu, the Yobe State capital for refusing to sale fuel to them in jerry cans.

Residents and motorists of Damaturu decried the unwholesome activities of security personnel in the ongoing fuel crises, accusing them of using ‘brute force’ to jump queues and get fuel supplies only to sale at prohibitive prices to at black market at about N500 a litre.

The Manager, Alhaji Auwulu Hassan who is now on admission with injuries at Gen. Sani Abatcha Specialist Hospital, Damaturu told newsmen; who visited him at the hospital that he was beaten up at the front of the Divisional Police Officer (DPO) of ‘A’ Division; where he ran. “I was about leaving the station when some soldiers approached me that they are coming from Buratai and going to Maiduguri so I should get them fuel.

I told them we have closed but I can get them 30 litres that will take them to Maiduguri but they said no, they want the fuel in jerry cans. Then I told them I can’t give them in jerry cans accept the 30 liters that would help them to get to Maiduguri.

“While we were arguing over this, one of them called one among them to go and bring the jerry cans. Within that time, I found a way of escaping from their sight because I noticed they were not ready to listen to me.

“I went and did my evening prayers, came back and sat opposite the filling station then I saw five soldiers coming towards me. Before I could say anything, they started beating me up and everybody that was there became surprised. Somebody wanted to call with his phone and they collected the phone and started beating him too.

“It was at this point that I ran to ‘A’ Division Police Station. They followed me to the Police Station and in front of the DPO they continued the beating,” said Auwulu.

Meanwhile, the action of the soldiers could bring more fuel hardship in Yobe State as the Independent Marketers in the state through their Chairman Alhaji Audu Girgiri have vowed not to open their fuel stations or receive any supply if those soldiers are not apprehended.

Alhaji Girigiri, told reporters at the General Sani Abatcha Specialist Hospital, Damauru where he went to sympathize with his member that the action of the soldiers was “primitive and uncivilized.”

“We cannot condone this kind of treatment on our members. If the military authority does not take action to punish those soldiers within the next 48 hours, all fuel stations in Damaturu and the entire Yobe will be closed,” Alhaji Girigiri warned.

The Yobe IMPAN Chairman yesterday also expressed his reservation over the Petroleum Taskforce in the state describing it as; “a failure.”

“I think the Petrol TaskForce in the state is a failure because it has created more problems than solutions. It is this task force that is causing scarcity and hardship for people in Damaturu presently unlike before when fuel us to be available,” explained Girigiri.

The spokesman of 3 Division (Tactical Headquarters) Damaturu; Col. Ogunsanya in a short sms said that he was not aware of the matter.

“I am not aware of this incident. I am currently in Port Harcourt. I will find out. Thanks, Col. Ogusanya’s,” he said yesterday in an SMS. However some military officers were said to have visited the hospital and apologised to Alhaji Auwulu Hassan on behalf of the soldiers and avowed to investigate and punished the soldiers who were responsible for his beating.