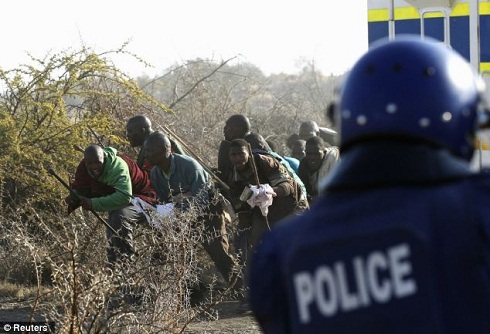 Up to 18 people were killed after South African police fired on striking workers at a mine owned by a British company.

The brutal scenes took place at the Marikana platinum mine, which is owned by British miner Lonmin. Aftermath: South African protesters lie motionless on the ground as heavily armed police officers check them at the Lonmin Platinum Mine near Rustenburg, South Africa Taking cover: Protesting miners can be seen cowering within the gun sights of an police officer. Witnesses say as many as 18 could have been killed in the shootings

Pictures showed bodies lying on the ground in pools of blood.

Scores of police, armed with automatic rifles and pistols, fired on the protesters, leaving many more injured.

Footage broadcast on South African television showed police letting off a volley of gunfire at the mine, 60 miles northwest of Johannesburg.

There were suspicions that some of the miners may have been armed with guns also.

Lonmin, the world’s third biggest platinum miner, had threatened to sack 3,000 rock drill operators if they failed to end a wildcat pay strike at its flagship Marikana mine, where 96 per cent of all the company’s platinum production comes from.

The company, which is registered on the London Stock Exchange and has its UK headquarters in central London, says it has so far lost six days of production, which represents ‘300,000 tonnes of ore, or 15,000 platinum equivalent ounces’.

The unrest at the mine began last Friday as some 3,000 workers walked off the job over pay in what management described as an illegal strike. Surrounded: Police form an armed cordon around strikers. It is unclear whether these miners are injured or lying down for officers to conduct searches Sticks and stones versus bullets: Miners can be seen between police vehicles throwing rocks at officers. Victims on both sides have been killed in recent days Gun battle: In the heat of the incident, dust flies and police take cover. Water cannon and tear gas had been fired at miners before police opened fire

Those who tried to go to work on Saturday were attacked, according to management and the country’s National Union of Mineworkers.

In a statement, Lonmin said striking workers would be sacked if they did not appear at their shifts today. ‘The striking (workers) remain armed and away from work,’ the statement read. ‘This is illegal.

The authorities claim the crowd killed two security guards on Sunday by setting their car ablaze, and that angry mobs killed two other workers and overpowered police, killing two officers by Monday. The next day, operations at the mines appeared to come to a standstill as workers stayed away.

Police moved in on striking workers gathered near the mine yesterday and urged them to give up their weapons, including machetes and clubs.

Some left, though others began war chants and soon started marching toward the township near the mine. At the centre of violence: The Lonmin PLC mine, near Rustenburg, 100km north-west of Johannesburg, where around 3,000 miners walked out on August 10 over wages. Since then there have been serveral fatal incidents

Police used a water cannon, stun grenades and tear gas to try to break up the crowd.

A group of miners are reported to have the rushed suddenly through the scrub and underbrush at a line of officers.

The clashes have been fuelled by struggles between the dominant NUM and the upstart Association of Mineworkers and Construction Union.

Lonmin, previously known as Lonrho, formed in the UK in 1909. It was involved in a series of takeovers during the 1970s and was criticised by then prime minister Edward Heath for being the ‘unacceptable face of capitalism’, following a sanctions scandal involving trade with what was then Rhodesia – now Zimbabwe.