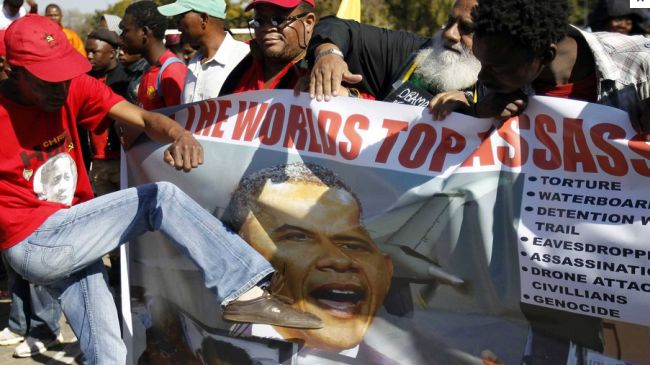 Hundreds of people have held a demonstration in the South African executive capital Pretoria to protest against Washington’s “oppressive” policies on the eve of a visit by US President Barack Obama to the African country.

The protesters marched towards the US Embassy, shouting slogans denouncing Obama’s foreign policy as “arrogant and oppressive”. They also burnt US flags.

In a car park outside the embassy, Muslim protesters held prayers, and leader Imam Sayeed Mohammed stated, “We hope that Mandela feels better and that Obama can learn from him.”

The US president landed at a military airbase near Pretoria on Friday evening for a visit that will pay homage to a man he calls his “personal hero”.

Mandela’s ex-wife, Winnie Madikizela-Mandela, said the 94-year-old had made “a great improvement” in recent days, but was “still unwell,” adding that she felt it would not be right for Obama to visit Mandela while he was in a critical condition.

The protesters said Obama, the first African-American president of the United States, should not try to link himself to South Africa’s anti-apartheid icon.

“Mandela valued human life… Mandela would condemn drone attacks and civilian deaths, Mandela cannot be his hero, he cannot be on that list,” said Yousha Tayob, a protester.

“We had expectations of America’s first Black president. Knowing Africa’s history, we expected more,” said Khomotso Makola, a 19-year-old law student. “He has come as a disappointment, I think Mandela too would be disappointed and feel let down.”

The US has increasingly turned to drones to carry out covert strikes in several countries, such as Pakistan, Afghanistan, Somalia, and Yemen. Washington claims its drone strikes target militants, although casualty figures show that civilians are often the victims of the non-UN-sanctioned attacks.

During his trip to Johannesburg, Cape Town, and Pretoria, Obama is scheduled to visit Robben Island, where Mandela was imprisoned for 18 years of the 27 years he spent in prisons during the apartheid era.

On June 8, Mandela was taken to hospital to be treated for a recurring lung infection.

On June 25, South African President Jacob Zuma issued a statement, saying that doctors are doing their best to ensure Mandela’s recovery and comfort.

“We must support him and support his family,” Zuma said, adding, “We must demonstrate our love and appreciation for his leadership during the struggle for liberation and in our first few years of freedom and democracy by living out his legacy and promoting unity, non-racialism, non-sexism and prosperity in our country.”

The Nobel Peace laureate, who led the country to democracy in 1994, left office in 1999 after serving one term as president.

Seen as South Africa’s moral compass, the highly revered leader announced his retirement from public life in 2004, but continued to make a few public appearances. source