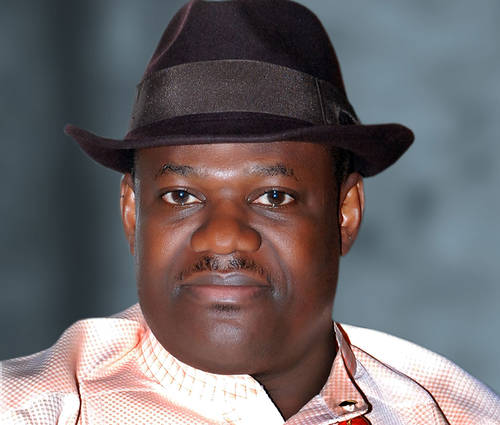 Mr. Ikuru made the call in Port Harcourt to a crowd of PDP supporters who turned out to welcome him after his defection from the APC.

The deputy governor also told the PDP supporters how his friend and boss, Governor Rotimi Amaechi, deceived him into leaving the party in 2013.

According to him, Mr. Amaechi made him to believe that joining the APC was the new order.

“I was deceived, I must confess,” he said. ” I was told that it was a new order. I did not know that it was all about the ambition of an individual. I say big thank you to you all PDP members because, when I was deceived out of PDP, if all of you had not stood your ground to keep the party alive, where would I have returned to?

“In our darkness, we thought that we were in the right place. What is happening in Rivers State today will haunt all of us if we allow it to go unchallenged.”

He announced that his supporters across the 23 local government areas of the state have agreed to dump the ruling APC.

Mr. Ikuru, who said genuine peace will return to the state after the March 28 presidential election, introduced some of his top supporters who defected with him including the former Deputy Mayor of Port Harcourt City, Victor Ere, APC Secretary in Andoni Local Government Area, Kingston Silvanus, amongst others.

Meanwhile, a source has told PREMIUM TIMES that Mr. Ikuru has started moving things out of his official quarters barely two days after he dumped APC for the PDP.

The embattled deputy governor is said to have started moving his personal belongings from his Old GRA official residence on Monday night.

According to the source, Mr. Ikuru is moving to his personal house located in Eagle Island, one of the water locked areas of Port Harcourt city.

“We saw people moving things out of the residence in the night and it is likely he is moving back to his personal house,” the source said.

The deputy governor might have decided to flee from his official residence to forestall being thrown out by Governor Amaechi.

Mr. Amaechi was sacked from his official quarters in 2007 when he would not yield to the PDP’s decision to replace him with his cousin, Celestine Omehia, as the PDP governorship candidate for that year’s election.

Mr. Amaechi was the speaker of the state house of assembly from 1999 – 2007 and was tipped to take over from the then Governor, Peter Odili.

However, during the PDP’s South-South zonal rally in Port Harcourt, former President, Olusegun Obasanjo, told party faithful that the gubernatorial ticket Mr. Amaechi won during the primary had a “K-leg”.

Instead of handing Mr. Amaechi the party’s flag, it was given to his cousin, Mr. Omehia, in a move that pitched the two brothers against each other.

When Mr. Amaechi challenged the party’s decision in court, his boss, Mr. Odili, immediately ordered security operatives to throw his personal belongings out of the speaker’s official residence.

The spokesperson for the Deputy Governor, Edna Alete, declined comment when PREMIUM TIMES contacted on whether or not Mr. Ikuru has moved out of his official residence.