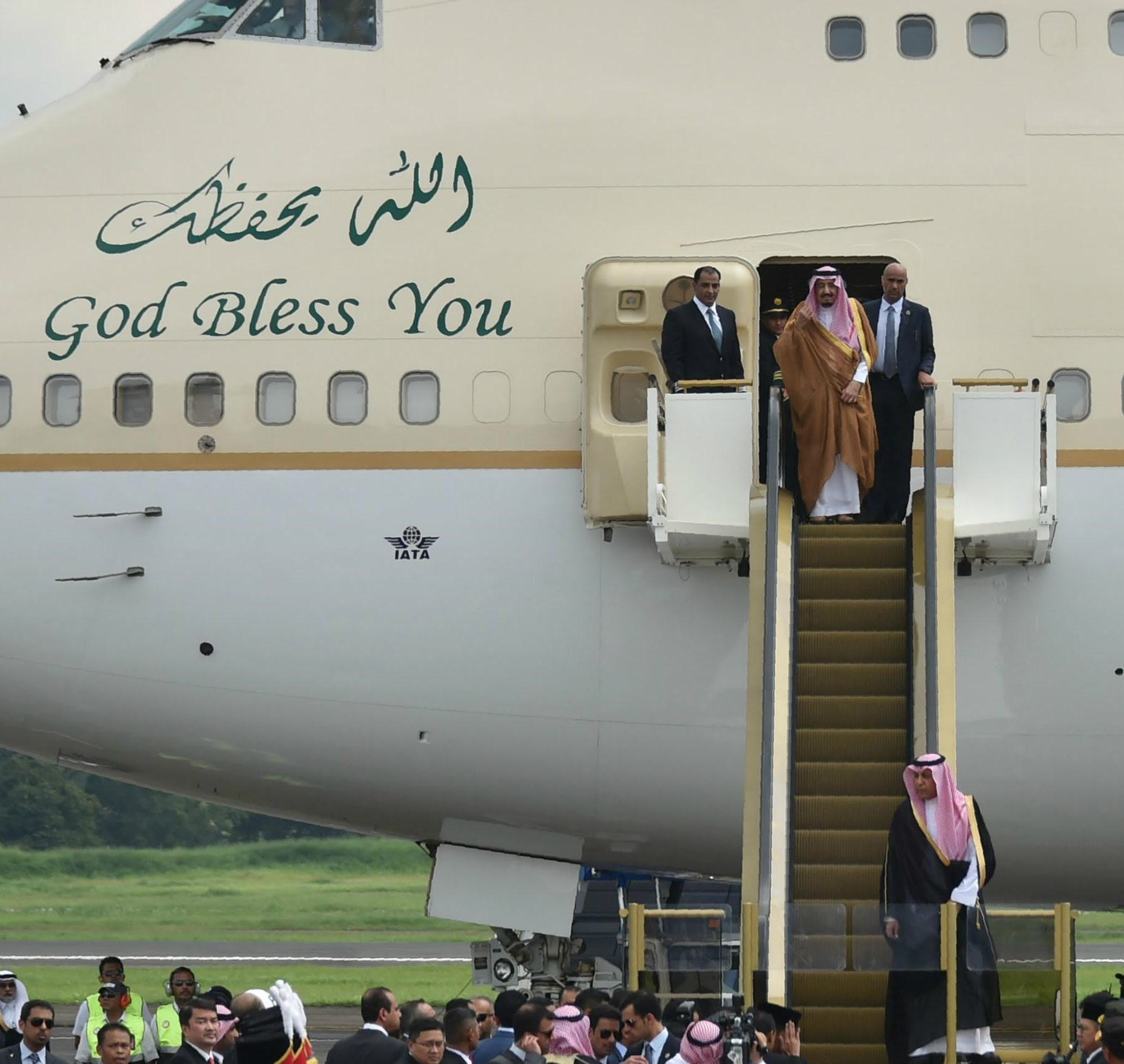 Critics in the Maldives likely sighed relief when Saudi King Salman this week postponed his visit because of an outbreak of flu. The flu is however unlikely to halt a planned massive Saudi investment or the impact on Maldives society of the kingdom’s religion-driven public diplomacy.

Big ticket investments and countering political violence dominated the headlines of the king’s tour of Asia together with the extravagance of his travel – an entourage of at least 1,000, 459 tonnes of luggage, a golden electric elevator for the monarch to descend from his private plane, and a specially built toilet for his visit to a Jakarta mosque.

Yet, religion often was an elephant in the room on most stops on King Salman’s trip that took him to Malaysia, Indonesia, Brunei, China and Japan and that was supposed to also include the Maldives.

All countries on the king’s intinerary feel the impact of a more than four-decade long Saudi soft power effort to spread Sunni Muslim ultra-conservatism in a bid to counter the potential appeal of Iran, whose regime came to power in a popular revolt and that in contrast to the autocratic kingdom recognizes some degree of popular sovereignty.

The Saudi effort, the single largest public diplomacy campaign in history, has fostered across the Muslim world greater conservatism, anti-Shiite and anti-Ahmadi sectarianism, intolerance, and a roll back of basic freedoms through among others tough anti-blasphemy laws.

To be sure, the Saudi campaign is one of several initiatives by Eurasian powers to assert influence across a swath of land stretching from Turkey to China. Yet, it is the one with the largest war chest except for China’s One Belt, One Road initiative.

The Saudi campaign moreover focuses on changing societies rather than exclusively on economics and security as in the case of China or Russia’s Eurasian Economic Union. Other powers build their efforts on ethnic or historic kinship as Turkey does with its neo-Ottomanism or India by forging closer ties to its Diaspora.

In some countries, such as Malaysia and Brunei, whose rulers seek legitimacy through greater public piety and association with Islam, Saudi religious diplomacy is a welcome contribution. In his role as Custodian of the Two Holy Mosques, a reference to the Muslim holy cities of Mecca and Medina, King Salman bestowed with his visit religious legitimacy on his hosts.

Saudi Arabia’s public diplomacy may also be boosted by mounting repression in Egypt that threatens foreign students at Cairo’s Al Azhar University, long the citadel of Islamic learning. Al Azhar is often viewed as an anti-dote to the ultra-conservatism of Saudi religious education. Repression in Egypt could, however, drive students to Saudi institutions instead.

Datuk Seri Idris Jusoh, Malaysia’s minister of higher education, told reporters in February that his ministry was no longer giving scholarships for study in Egypt. An estimated 11,000 Malaysians study in the North African country. “Right now, the situation in Egypt has not fully settled down, our embassy there is still monitoring the security situation there,” Mr. Idris said.

The risks involved in an embrace of Saudi-inspired Sunni ultra-conservatism are never far. Decades of Saudi funding often creates an environment that is not inherently violent in and of itself but enables breeding grounds for more militant interpretations of the faith that target not only local environments but also the kingdom itself.

“Saudi oil money has been changing the religious make-up of Malaysians since the 1970s, but more direct penetration of Saudis in the religious sphere may change the outlook of ordinary Malaysians further,” said Malaysia scholar Norshahril Saat in a recent commentary on King Salman’s visit.

Malaysia detained at least seven suspects in advance of King Salman’s arrival who allegedly were planning to attack the monarch.  Two months earlier, police opened an investigation into a Saudi-backed university in Selangor, the International University of Al-Madinah, after two of its students were detained on suspicion of being militants.

Established in 2006, the university’s religious teachings have long been suspected by authorities of promoting extremism. The university has denied the allegations. But a top Malaysian counter-terrorism official, Ayob Khan Mydin Pitchay, said that efforts to persuade the university to change its syllabi had so far come to naught.

While symbolism may have worked in favour of the rulers of Malaysia and Brunei, Indonesia’s Joko Widodo, president of a country that prides itself on its tolerant version of Islam, appears to have subtly turned the tables on King Salman. In an effort to portray himself as the leader of all Indonesian Muslims and to counter growing ultra-conservative influence, Mr. Widodo employed Javanese cultural concepts of tolerance and dialogue.

Symbolism was evident in differing welcomes of the king in Java and Bali. Nude statues that dot the botanic gardens at the Presidential Palace in Bogor, about 40 kilometres outside of Jakarta, were covered with potted plants to avoid offending the Saudis. Predominantly Hindu Bali decided to do nothing of the sort.

In meetings with major Indonesian Islamic organizations, including Nahdlatul Ulama, a 91-year old, traditionalist movement that has opposition to Wahhabism, the ultra-conservative strand of Islam that legitimizes the rule of the Sauds, written into its DNA, King Salman said Indonesia and his country had agreed to promote a more moderate version of the faith.

To be sure, King Salman’s predecessor, King Abdullah already started cautiously reaching out to other strands of Islam as well as other faiths. Moreover, Vision 2030, the plan to diversify the Saudi economy and upgrade the kingdom’s autocracy, seeks to deprive ultra-conservatism in Saudi Arabia of its rough edges and bring it more in line with the 21st century.

It also seeks to counter militant ideological offspring, including jihadism, by promoting an interpretation of Islam that dictates unconditional obedience to the ruler. The problem is that more than four decades of Saudi support has created a family of worldviews that leads their own lives, no longer are dependent on Saudi funding, and includes activist segments critical of the Al Sauds as well as their own rulers.

It’s not clear to what degree ideological reforms King Salman’s son and deputy crown prince, Mohammed bin Salman, is introducing in the kingdom trickle down to Saudi-funded institutions elsewhere. Saudi Arabia said during King Salman’s visit that it would be opening two new campuses in Makassar and Medan of its Jakarta-based Islamic and Arabic College of Indonesia (LIPIA), a branch of Imam Muhammad ibn Saud Islamic University in Riyadh.

Mounting concern about growing ultra-conservatism in China’s troubled north-western Xinjiang province, home to the Uyghurs, ethnic Turks who stubbornly seek to preserve their culture and identity as well as among the Hui, a wholly integrated Muslim community, could complicate relations with Saudi Arabia.

China and Saudi Arabia trumpeted their strategic relations during King Salman’s visit, yet Beijing has done little to counter rising Islamophobia in the media and among Chinese officials.

To lay the groundwork for a $10bn investment that would give the kingdom control of an Indian Ocean atoll, Saudi Arabia funded religious institutions in the Maldives and offered scholarships for students to pursue religious studies at the it’s ultra-conservative universities.

The funding has pushed the Maldives, a popular high-end tourist destination, towards greater intolerance and public piety. Public partying, mixed dancing and Western beach garb have become acceptable only within expensive tourist resorts.

The Saudis “have had a good run of propagating their world view to the people of the Maldives and they’ve done that for the last three decades. They’ve now, I think, come to the view that they have enough sympathy to get a foothold,” said former Maldives president Mohamed Nasheed said.