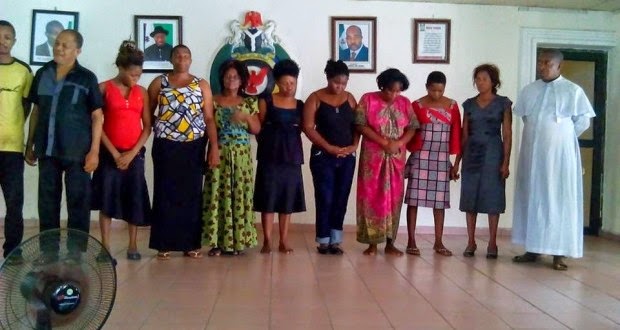 Officials of the State Security Service paraded a Catholic priest and 20 others for their alleged involvement in child theft in Akwa Ibom State on Tuesday. SSS Deputy Director, Fubara Duke, said Rev Okono Joseph of St Peter’s Parish of the Owerri Catholic Diocese in Imo State, was arrested for buying two boys (three and four years) at N900,000.

Fubara Duke, who spoke at DSS headquarters in Uyo, said the self-styled man of God bought the children in a secret deal from an agent sponsored by one Uche Joel Canice Onyekedru from Ogiri in Imo State.

He said the kingpin of the syndicate, Onyekedru, can’t even remember the number of kids he has sold:

“He usually operates in conjunction with agents, who liaise with government officials in children homes and maternity hospitals. The investigation took our men to Abia, Imo and Ebonyi states before they arrested some of the suspects. Over 20 children were rescued.

“Though some of the suspects are still at large, efforts are being intensified to ensure that they are all arrested.”