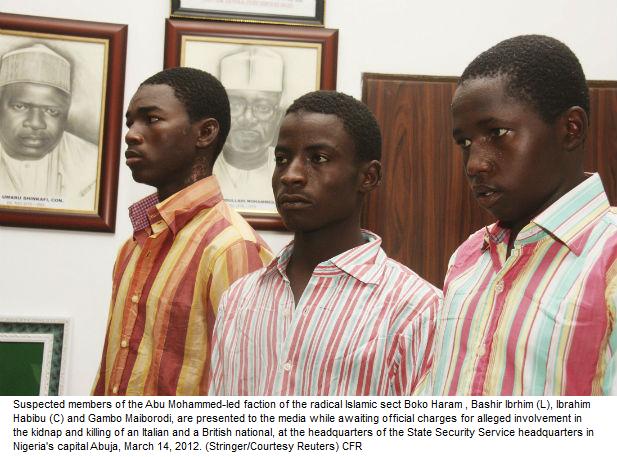 Punch- Fear gripped many residents of Lagos on Thursday when news filtered in that troops numbering about 100 stormed terror suspects’ hideouts in Ijora, a densely populated part of the city.

The soldiers, who were assisted by men of the State Security Service, were believed to have acted on a tip-off. They were said to have arrived in the area around 7am in search of the suspects said to be members of an Islamic fundamentalist sect, Boko Haram.

It was learnt that their search yielded fruits when two persons were arrested at 24 Aromire Street and three others at a location in an adjacent street.

The soldiers then ransacked the building at Aromire Street where one of the arrested persons, Ibrahim Musa, occupies five rooms. A bomb kept in a cooler and hidden inside the ceiling of one of the rooms in Musa’s apartment was recovered by the soldiers.

Musa, who a security source described as an illegal alien from Chad, was said to be leader of the suspects.
Other items found were AK-47 rifles, cartridges and daggers.

The security source, who craved anonymity, added the raid was as a result of an investigation which began a month ago. He said, “Security agents got information a month ago that there was a terrorist hideout in the Seven-Up area of Ijora. Although we were not sure if they were Boko Haram members or not, we did not want to take any chances so we decided to go and raid the place.

“It was discovered that the place was being run by a Chadian and arms were recovered during the raid, including AK-47 riffles. Investigations are ongoing and those who are found not culpable will be released.”
Musa’s neighbour, who craved anonymity, told one of our correspondents that they did not suspect he was a member of Boko Haram.

He said the suspect moved into the house less than three months ago. “Musa rented his apartment about three months ago. However, since he moved in with his wife, who recently had a baby and a brother, none of them had any known form of livelihood. Musa and his brother, particularly were always going about with their laptops and expensive phones. “Though he (Musa) was not working, he was usually the first to pay for anything in the house. It was when the soldiers came that we got to know what they truly are. It was in the course of beating him (Musa) that he told the soldiers where he hid the bomb and guns.”

Another resident of the area, who identified himself simply as Olu, said that when the suspects were being taken away by the soldiers “we did not know they were living here.” “When soldiers were taking them away, we wondered if they were living in the neighbourhood. It was my neighbour, who told me he had seen Musa once or twice,” he said.
Olu said when the soldiers were going, they told them to be vigilant in the area, saying Boko Haram members had infiltrated the area, particularly the Hausa settlement.

When one of our correspondents met the Ojora of Ijora , Oba Fatai Adeyinka, he said he was shocked that Boko Haram members had infiltrated the area. The spokesman for the Army 81 Division, Colonel Kingsley Umoh, confirmed the raid but said the army had been carrying out constant raids across the state in response to the rising level of insecurity in the country. Umoh said over 36 people had been arrested recently. He however said he had yet to receive the details of Thursday’s operation. He said, “The Nigerian Army is carrying out a proactive approach. We are raiding every nook and cranny of the state in order to rid it of criminal elements. We are not ignorant of the insecurity in the country so we are carrying out preventive measures and we want to make sure that Lagos is safe for all its inhabitants.

“The raids have been in collaboration with sister agencies like the Nigerian Security and Civil Defence Corps, the SSS, the police and others. It is the OP MESA of the army that is at the forefront of the raids and we have recorded many successes of late as we have also arrested some soldiers who were found wanting. “I will not be able to brief you fully about Thursday’s raid.”

Lagos State Director, SSS, Achu Olayi, also confirmed the raid but said that it was too soon for him to say if the suspects were Boko Haram members or not. The raid on Thursday on the predominantly Hausa settlement came a month after the SSS uncovered a terror network coordinated by Iranians in Lagos.

The SSS had said while parading a leader of an Islamic sect, Abdullahi Berende, and two others that they believed that the operators of the Iranian terror cell were gathering information about Israelis and Americans living in Nigeria.