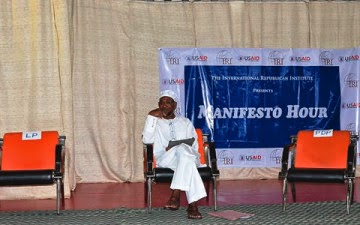 We issue this statement to reassure all invited delegates, the distressed people of Osun state and Nigerians at large that the proposed summit on the state of Osun state scheduled for Thursday, 23rd July 2015 in Osogbo is going on as scheduled.

The last 96 hours has witnessed an appalling vituperations by caterwauling megaphones and cretinous babbles of agents of the Osun state Government in a desperate attempt to muddle the water and confuse the public.
In order to lift the discourse from the imbecilic to the mental magnitude that was our forte in the state of Osun before the unfortunate descent, we state the following:

1. Osun Stakeholders is a socio-cultural movement of authentic sons and daughters of state. There is not one of us whose paternal link to Osun state is any controversy.
2. Prominent members of the group have played critical roles in National affairs over the years and cannot afford to maintain sinful silence when their kits and kins are being turned to destitute scrambling for doles from good spirited philanthropists.
3. It is an unreasonable assault on the pedigree of leaders of our group to be accused of being fronts for anybody. When some of us were at the frontline of the resistance to Abacha tyranny, those who want to impose a culture of fear and silence on Osun state today were nowhere to be found. And when some of us supported them when they were seeking the mandate of our people we were great guys to them.
5. The summit we are holding is all inclusive as all the former governors of the state we have invited to the summit are members of the APC. Beyond that we have extended ten invitation cards to the APC, ten to the PDP and 20 to other political parties. We have also invited our traditional rulers, labour unions, religious leaders, academic community and the intelligentsia.
6. Our aim with this gathering of Osun nobles is to look at where the rain began to beat us and how to ensure Osun is never exposed to this kind of rain again.
7. Ours is a peaceful assembly of the best of Osun state to be presided over by a retired Supreme Court judge, Justice Olu Adekeye.

If there is anyone thinking of violence, it can only be by the apostles of violence who have are building a culture of intolerance in our dear state and this is why we have written to all security agencies to provide maximum cover for this responsible assembly fashioned in the best intention of the right of assembly constitutionally guaranteed.
(see attached)