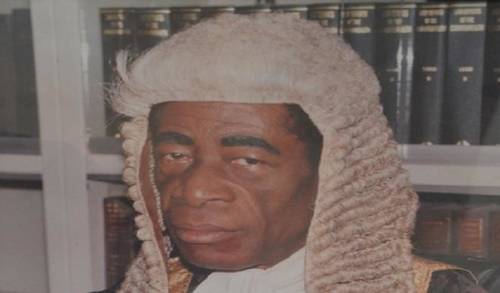 SaharaReporters has learned that a Deputy Registrar of the Supreme Court, Hajio Sarki-Bello, played a key role in facilitating a decision by a panel of justices of the apex court to temporarily halt the corruption trial of Nigeria’s Senate President Bukola Saraki.

Two sources in the judiciary, including one at the Supreme Court, told our correspondent that Mrs. Sarki-Bello had capitalized on the absence of the Chief Justice of Nigeria (CJN), who is currently traveling in Brazil, to arrange with a few ethically questionable justices to quickly hear Mr. Saraki’s case and grant him a temporary reprieve from the ongoing trial at the Code of Conduct Tribunal (CCT). Our sources disclosed that the deputy registrar at the Supreme Court met several times with Toyin Sanusi, a former aide to Governor Ahmed Abdul Fatah of Kwara State who now works for Mr. Saraki in Abuja, to cut the deal for the embattled senator.

One source described Mrs. Sarki-Bello as extremely close to former Chief Justice of Nigeria, Alfa Belgore, who had been anchoring the attempts to bribe justices to halt Mr. Saraki’s trial at the CCT.

One judicial source said Mrs. Sarki-Bello, who hails from Niger State, was promoted from level 9 to level 16 between 2006 and 2007 when Mr. Belgore was the Chief Justice of Nigeria.

Mr. Sanusi, a close aide and confidant of Senator Saraki’s, drove in and out of a house on Mandela Street in the Asokoro area of Abuja where he and Mrs. Sarki-Bello reportedly met with some of the justices who sat on Mr. Saraki’s case.

The judge who was eventually tabbed to lead the case, Justice John Fabiyi, is scheduled to mandatorily retire from the Supreme Court on November 25, 2016, his 70th birthday. Justice Fabiyi is also from Mr. Saraki’s home state of Kwara.

On sensing that the Supreme Court panel was bent on truncating the senator’s trial, the prosecuting counsel, Rotimi Jacobs, had urged the justices to let the Code of Conduct Tribunal suspend the trial to enable him to file his defense and make a solid case for continuing Mr. Saraki’s trial for false declaration of assets. But the lead judge, Justice Fabiyi, refused.

During the hearing  Justice Fabiyi at a point stated that as judges they were not bound by a new criminal justice administration set of rules that prevents courts from interfering with criminal proceedings.

A source in the judiciary disclosed that Justice Fabiyi was notorious for rendering shaky or even baffling verdicts designed to please or serve powerful political interests. After the 2007 presidential elections, he was the justice who read the majority judgment asserting that the massively rigged elections conformed to the electoral act. Consequently, he declared the now late President Umaru Yar’Adua the valid winner of the election. Mr. Yar’Adua himself later admitted, before his death, that the elections were rigged.

SaharaReporters also learnt that Justice Fabiyi was the judge who struck a deal with Olabode George, a henchman of the Peoples Democratic Party (PDP), which resulted in the Supreme Court reversing the politician’s conviction for fraud.

A source at the Supreme Court told SaharaReporters that there was a good chance that the Chief Justice of Nigeria would reconstitute the panel that will continue to hear Mr. Saraki’s case. SR