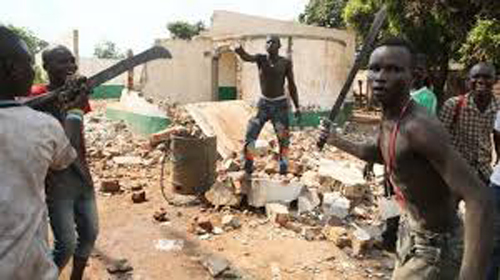 Our earlier publications had warned that without the right and rapid reassurance by the government and moves to assure the protection of victims and punishment for perpetrators of violence, there would be more victims on either side. We specifically warned (See: Army Endangering Real Herdsmen Across Nigeria) that the lukewarm attitude of the government was particularly putting Fulanis they tried to protect at greater risk.

This appears to have come to pass as suspected Benue gunmen over the weekend raided a Fulani settlement in Nasarawa. TheNation‘s Yusuf Alli reports:

Gunmen at the weekend killed 83 cows at Adayi in Nasarawa Local Government Area of Nasarawa State.

At Loko, the monarch claimed that about 20 people have been killed by gunmen in the last few weeks.

The killings were suspected to be reprisals by gunmen who crossed over from Benue State.

Although security agencies have stepped up investigation, the Fulani leader of Adayi area of Loko, Mallam Bideri Ahmadu, alleged that suspected Agatu gunmen from Benue State might be behind the killings.

The traditional ruler of Loko, Alhaji Abubakar Ahmed Sabo, alleged that Agatu youths might have perpetrated the act.

The Fulani community leader, Mallam Bideri Ahmadu, who addressed reporters in Loko, alleged that Agatu youths crossed over from Benue State about 10:30am last Saturday.

He said the suspects had wanted to “rustle the cows in their boats across River Benue, but the cattle went berserk because of sporadic shootings.”

Ahmadu said:  “Upon realising they could not achieve their aim, the Agatu youth opened fire on the cows, killing 83. The injured ones are in the bush.”

The Mai Loko, Alhaji Abubakar Ahmed Sabo, said in the last few weeks, over 20 men, women and children were killed during attacks on Fulani people by Agatu youths from Benue State.

He said the Loko Development Area has only two police officers with no rifles and appealed for more security presence.

Sabo urged the Fulani not to retaliate because the government was looking into the crisis.

The Director of Personnel Management (DPM) of the development area, Danlami Umar, said the “fishing community has suffered a setback because the riverine area has been taken over by Agatu youths, who kill at will.

Police spokesman Ismaila Numan said the Nasarawa Division received a report of the killing of 83 cows by suspected hoodlums and investigation had started.

A security source said: “There has been tension in the area since the killing of more than 300 people in Agatu area of Benue State by suspected Fulani herdsmen.

“We are suspecting reprisals by Agatu youths who do not want Fulani herdsmen in their area again.

“The crisis between the Fulani and the Agatu is posing a threat to life and property in the two states.

“Nasarawa and Benue governments have to step into the incessant clashes between the Fulani and the Agatu.”