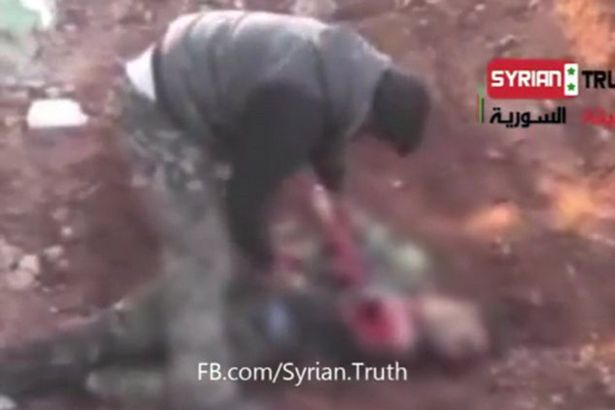 It is one of the most horrific images to emerge from the two year civil war which has killed 82,000 people

A gruesome video has emerged on the Internet, showing a foreign-backed militant in Syria cutting out the heart of a Syrian soldier and biting into it.

The terrorist/rebel is believed to be Abu Sakkar, a founder of the rebel Farouq Brigade

In the footage posted online on Sunday, a man wearing military gear is seen knife in hand slicing parts of a dead soldier’s torso before turning to the camera and putting the heart in his mouth.

“I swear we will eat from your hearts and livers…,” the man says referring to the Syria government soldiers.

Peter Bouckaert of the New York-based Human Rights Watch says the man has been identified as Abu Sakkar, a founder of the militant Farouq Brigade.

Abu Sakkar’s identity has been confirmed by militant sources in Homs and by images of him in other videos wearing the same black jacket as in the latest clip and with the same rings on his fingers.

“The mutilation of the bodies of enemies is a war crime. But the even more serious issue is the very rapid descent into sectarian rhetoric and violence,” Bouckaert said.

He added that in the unedited version of the film, Sakkar is heard telling his men to slaughter the Syrian soldiers and take their hearts out to eat them.

The footage has caused outrage among both supporters of President Bashar al-Assad and opposition figures.

Turmoil has gripped Syria since March 2011, and many people, including large numbers of Syrian security forces, have been killed in the unrest. Source: PressTv

The video, a 27-second clip in which al Hamad brandishes organs that appear to be the lungs and heart of the Syrian soldier who lies dead at al Hamad’s feet, was first seen by two TIME reporters in April. A few weeks later TIME obtained a copy. Though we had been told by witnesses to the filming that the video was legitimate, we set about authenticating its content, aware of the potential that it could have been faked for propaganda purposes. Al Hamad has now confirmed that the video is real, and that he did indeed take a bite of the soldier’s lung. (At the time of the filming, al Hamad believed that he was biting into the liver. A surgeon who has seen the video confirms that the organ in question was a lung, which somewhat resembles the liver). On May 12, a copy of the video appeared on a pro-regime website, sparking a flood of Facebook “shares” and YouTube views.

Al Hamad, who is Sunni and harbors a sectarian hatred for Alawite Muslims, said he has another gruesome video of his killing a government soldier from the Alawite faith. (Syrian President Bashar al Assad is Alawite; the conflict in Syria is increasingly sectarian.) “Hopefully we will slaughter all of them [Alawites]. I have another video clip that I will send to them. In the clip I am sawing another Shabiha [pro-government militiaman] with a saw. The saw we use to cut trees. I sawed him in small pieces and large ones.”