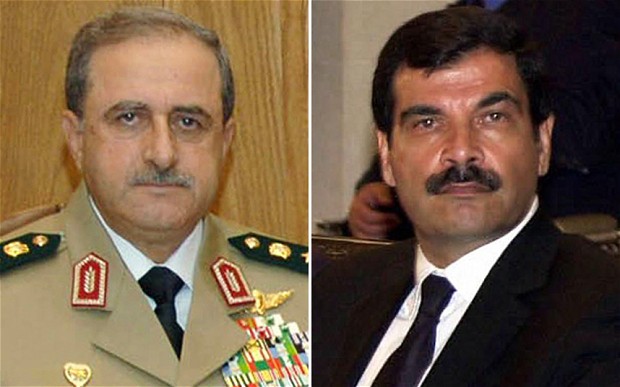 BEIRUT — A bomb in the Syrian capital killed two of the country’s top security officials — the defense minister and his deputy, the latter a brother-in-law of President Bashar Assad — the official Syrian news service reported.

The blast, an audacious strike at the heart of the government, killed Defense Minister Dawoud Rajhah and Gen. Asef Shawkat, the deputy defense minister.

The official Syrian Arab News Agency blamed the killings on a “terrorist explosion which targeted the National Security headquarters” in the capital during a meeting of “a number of ministers and senior security officials.”

There were reports of other casualties, possibly including the interior minister and national security chief, but none were immediately confirmed.

The killing of Shawkat, who had reportedly been targeted in other plots, hits directly at the Assad family, which has ruled Syria for more than 40 years. He reportedly was married to  Assad’s sister, Bushra, and was considered a key figure in the inner circle of the government.

The blast comes as rebels and security forces have been engaged in four days of skirmishes in the capital, which was long spared much of the violence occurring elsewhere in Syria.

Opposition activists posted video online overnight purporting to show a military barracks ablaze near the presidential palace.  The government was reported to have bolstered troops in the capital to meet the threat in various neighborhoods, including the Midan district near the center.

The defense minister appears to be the most senior government casualty in the uprising, now entering its 17th month. Rebels are seeking to force Assad’s ouster.

Following the defense minister’s death, Assad appointed Gen. Fahd Jassem Freij as both defense minister and deputy commander in chief of the army and the armed forces, the official Syrian news service reported.

For months, insurgents have been assassinating security officers viewed as “collaborators” with the Assad government. The president calls the guerrillas “terrorists” and has vowed to defeat them.

The bombing occurred as the issue of Syria was coming before the United Nations again. The United States and allies seeking Assad’s ouster are calling for economic sanctions against Syria. But Russia, which holds a veto on the Security Council, has objected to sanctions.

Whether the explosion was part of a broader rebel offensive in the capital was not clear.

At least one rebel leader has declared that the “liberation” of Damascus was in progress. But the scattered violence and skirmishes do not necessarily suggest a coordinated series of attacks against Assad’s security forces. – Los Angeles Times