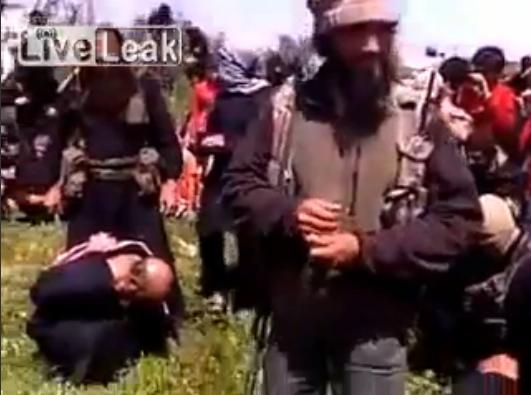 A shocking video has emerged on the Internet showing US-backed Takfiri militants in Syria brutally beheading two Christians including a priest in the western city of Homs.

In the gruesome footage recently posted online, the militants who are said to be members of the terrorist al-Nusra Front, cut off the heads of two handcuffed men, including Father Francois Murad, with a small knife in front of a crowd of people.

This is not the first time that the US-backed terrorists who are fighting against the Syrian government commit such grisly crimes against innocent civilians in the war-torn country.

In March, a Muslim cleric was beheaded in Syria’s northern city of Aleppo by militants, who decapitated Sheikh Hassan Saif al-Deen before dragging his lifeless body on the streets.

Local media blamed the beheading on the al-Qaeda-linked al-Nusra.

Foreign-sponsored militancy in Syria, which erupted in March 2011, has claimed the lives of many people, including large numbers of Syrian soldiers and security personnel.

The al-Nusra Front has been behind many of the deadly bombings targeting both civilians and government institutions across Syria since the beginning of the violence.

In an interview broadcast on Turkish television in April, Syrian President Bashar al-Assad said if the militants take power in Syria, they could destabilize the entire Middle East region for decades.

VATICAN CITY (Catholic Online) – The Vatican is confirming the death by beheading of Franciscan Father, Francois Murad, who was martyred by Syrian jihadists on June 23.

Below is the news release from the Vatican, via news.va.

On Sunday, June 23 the Syrian priest François Murad was killed in Gassanieh, in northern Syria, in the convent of the Custody of the Holy Land where he had taken refuge. This is confirmed by a statement of the Custos of the Holy Land sent to Fides Agency. The circumstances of the death are not fully understood. According to local sources, the monastery where Fr. Murad was staying was attacked by militants linked to the jihadi group Jabhat al-Nusra.

Father François, 49, had taken the first steps in the religious life with the Franciscan Friars of the Custody of the Holy Land, and with them he continued to share close bonds of spiritual friendship. After being ordained a priest he had started the construction of a coenobitic monastery dedicated to St. Simon Stylites in the village of Gassanieh.After the start of the Civil War, the monastery of St. Simon had been bombed and Fr. Murad had moved to the convent of the Custody for safety reasons and to give support to the remaining few, along with another religious and nuns of the Rosary.

“Let us pray,” writes the Custos of the Holy Land Pierbattista Pizzaballa OFM ” so that this absurd and shameful war ends soon and that the people of Syria can go back to living a normal life.” Archbishop Jacques Behnan Hindo, titular of the Syrian Catholic archeparchy in Hassaké-Nisibis reports to Fides: “The whole story of Christians in the Middle East is marked and made fruitful by the blood of the martyrs of many persecutions. Lately, father Murad sent me some messages that clearly showed how conscious he was of living in a dangerous situation, and offered his life for peace in Syria and around the world. “

The video serves as yet another reminder that the Obama administration is directly aiding terrorists with its decision to arm the rebels with heavy weaponry. Despite efforts to differentiate between FSA militants and Al-Qaeda terrorists, the two groups have clearly merged into a single force.

-In a recent video, US backed al Qaeda Rebel Children in Syria, on terror training hailed 911 attack and Al Zawahiri.

After being downplayed for well over a year, the reality that Al-Qaeda terrorists are leading the other rebel groups in Syria, and that the Obama administration is set to arm extremist radicals who will later pose a direct threat to American national security, is now widely accepted.

Even the Mayor of London Boris Johnson broke ranks with British Prime Minister David Cameron earlier this week to warn that there was no way to prevent such weapons reaching “Al-Qaeda-affiliated thugs” and that western powers would be “pressing weapons into the hands of maniacs”.