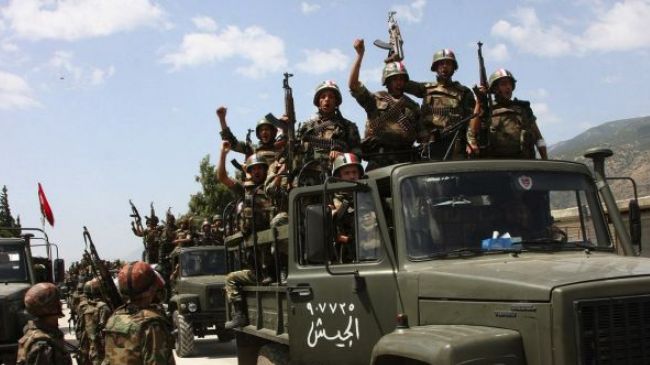 (CNN) — Syrian government forces seized control Wednesday of the strategically important border city of Qusayr, which had been the site of nearly seven weeks of fighting.

State-run TV credited an offensive “that led to the annihilation of a number of terrorists,” the government’s term for rebels.

“Our heroic armed forces are always determined to confront any aggression that our beloved homeland may face in the future,” an anchor on Syrian state television said. -CNN

Iran has congratulated the Syrian nation, government, and army on the success of the Syrian military forces in recapturing the strategic town of al-Qusayr in Western Syria.

“Certain sides that continue to support the shipment of arms and terrorist acts against Syria are responsible for the killing of the people and destruction of Syria,” Amir-Abdollahian said.

“They should be tried as war criminals,” the Iranian diplomat pointed out.

Syria’s state television reported on Wednesday that Syrian forces had regained full control of Qusayr following three weeks of fighting with the militants in the region.

The Syrian military forces dismantled the terrorist network of the militants in the strategic area, which borders Lebanon.

Many of the foreign-backed militants and members of the armed groups were killed or injured during the Syrian army operations to cleanse the region of the terrorists.

Following the successful operations, the militants fled to farms and a village near Qusayr.

Reports indicate that peace and security have now been restored in the region following the defeat of the terrorists.

The unrest in Syria began in March 2011, and many people, including large numbers of Syrian soldiers and security personnel, have been killed in the violence.

The Syrian government says the chaos is being orchestrated from outside the country, and there are reports that a very large number of the militants are foreign nationals.

Damascus says the West and its regional allies, such as Qatar, Saudi Arabia, and Turkey, are supporting the militants. –PressTv