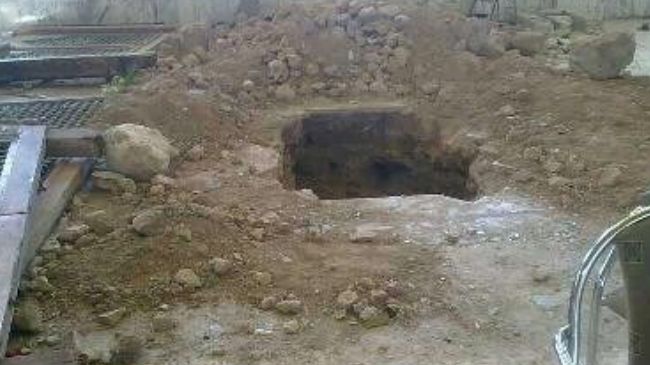 Reports from Syria say Wahhabi extremists have desecrated the grave of an ancient Muslim figure near the capital, Damascus.

The militants have reportedly attacked the mausoleum and exhumed the grave of Hujr ibn Adi in the Damascus suburb of Adra, and took his remains to an unknown location.

Hujr – a close companion of the Prophet Mohammad (PBUH) and a staunch supporter of the first Shia Imam Ali ibn Abi Talib (PBUH) – led the army of Muslims to victory in several crucial battles.

He and his sons finally fell victim to their loyalty Imam Ali (RA) and were murdered on the orders of the Umayyad Caliph Muawiyah in the year 660 CE.

Syria has been experiencing a deadly unrest since March 2011, and many people, including large numbers of army and security personnel, have been killed in the chaos.

The Syrian government says that the violence is being orchestrated from outside the country, and there are reports that a very large number of the insurgents are foreign nationals.

Damascus says the West and its regional allies Qatar, Saudi Arabia, and Turkey are supporting the armed groups.

Sunni scholar Sayyid Abul Ala Maududi in his book Caliphs and Kings writes:“Hajar ibn Adiy was a pious companion of the Prophet (saws) and played a vital role in the correction of the Ummah. During Muawiyah’s reign when the custom of cursing Ali from the pulpit’s of Mosques began, hearts of the Muslims were being bled dry but people bit their tongues fearing death. In Kufa Hajar ibn Adiy could not remain silent and he began to praise Ali (ra) and condemn Muawiyah. Until Mughira remained the Governor of Kufa, he adopted a lenient attitude towards this, but when Ziyad’s Governorship of Basra was extended to include Kufa, serious altercations arose. He would curse Ali (ra) during the khutbah and Hajar would refute him.

On one occasion he (Hajar) warned Ziyad for being late for Jummah prayers. Ziyad then arrested him along with twelve of his companions on false accusations of forming an opposition group to overthrow the Khalifa and was cursing the Khalifa. He also gathered witnesses to testify against them alleging that they claimed that khilafath was the exclusive right of the lineage of `Ali ibne Abi Talib and further accused them of creating an uproar, throwing out the commander and of supporting `Abu Turab Ali, of sending blessings upon him and hating his enemies. From amongst these witnesses, Qadi Shudhri’s testimony was used. He later wrote to Muawiyah that the blood and property of people who said they offered Salaah, paid zakaat, and performed Hajj and Umrah, preached right and declared that evil was haram, however if you want to kill them so be it, otherwise forgive them.

The accused were sent to Muawiyah and he sentenced them to death. A condition was placed that if they cursed `Ali (ra) and showed their hatred to him they would be pardoned. They refused and Hajar ibn Adiy said `I will not say that thing that will displease Allah’.

Finally Hajar ibn Adiy, his son Humaan ibn Hajar and his seven companions were murdered. From amongst them Abdur Rahman bin Hasan was sent back to return with a written instruction that he be murdered in the worst possible manner, Ziyad buried him alive.” -Wikipedia

More Images of the Desecration