Perhaps in an attempt to soften coming revelations that Syria’s opposition will be increasingly armed and backed by the West for a final military push to divide and destroy a sovereign Syria, Reuters released a report titled, “Outgunned Syria Rebels Make Shift to Bombs.” The report admits that the Syrian rebels, depicted so-far as hapless pro-democracy protesters, are now turning to bombing tactics.

Reuters quotes one rebel fighter as saying, “we are starting to get smarter about tactics and use bombs because people are just too poor and we don’t have enough rifles.” The unnamed rebel continued, “it is just no match for the army, so we are trying to focus on the ways we can fight.” Reuters  attempts to allay the fears of its readers by claiming rebels they interviewed insisted that, “unlike al Qaeda, their bombs were aimed at military, and never civilian, targets.”

Paradoxically, however, the Reuters story reveals that the rebel bombing campaign is being carried out by Sunni “hardliners” who learned their bombing skills from fighting (and killing) US troops in neighboring Iraq – or in other words, the very “al Qaeda” the rebels claim they are not like. A “Syrian Liberation Army” spokesman also admitted that his fighters were operating “manufacturing facilities” for bombs – like the one in Hama that recently exploded, killing 70 and leveled the greater part of a city block. 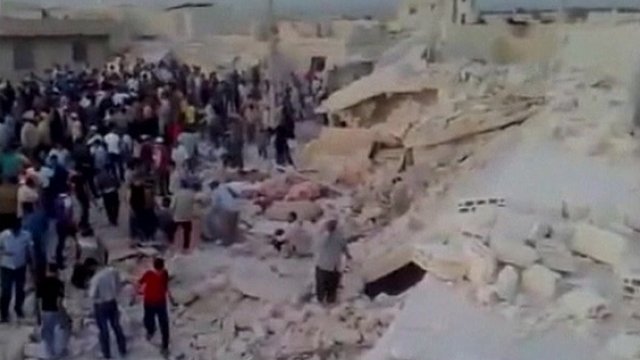 Photo: From Hama, Syria, a city block lies in ruins after a rebel bomb factory mishap caused a massive explosion. At least 70 have been reported killed. In initial attempts to spin and cover up rebel involvement, BBC actually ran with an opposition explanation suggesting the Syrian government fired “SCUD missiles” at Hama. It is now revealed that the rebels are indeed operating bomb factories across Syria and indeed carrying out a terrorist bombing campaign.
….

And as the loss of life to rebel bombings begins to escalate, and despite openly admitting their switch of tactics, the Syrian opposition has clumsily begun claiming any attack resulting in civilian deaths is the work of the government carrying out “staged attacks.” The Hama bomb factory was in fact first reported by the Syrian opposition and their supporters across the Western media as a possible “Scud attack,” after stories of “government shelling” didn’t add up. Clearly, between no evidence of “Scuds” and with open admissions that indeed the rebels are operating bomb factories, we are seeing a transparent example of the media distorting events to cover up what is in reality a deadly indiscriminate terrorist campaign.

Video: Paul Joseph Watson navigates the latest developments regarding a coordinated mass media coverup of Syrian rebels admittedly engaged in terrorist activities as well as the involvement of foreign terrorists being shipped in to fight for a supposedly “Syrian uprising.”

Now with a narrow escape by UN monitors targeted by a roadside bomb and bomb blasts rocking Damascus killing up to 55 people and injuring hundreds, the opposition and media are again teaming up to disavow any responsibility. But just as the rebels admitted to Reuters, the bombings in Damascus targeted a government intelligence building, the very sort of target the rebels claimed they were looking for.

The idealistic comments made to Reuters by rebels of only “targeting” military forces” fall flat when these forces are attempting to maintain order in populated civilian areas. Bombs targeting a military convoy or a government building are just as likely to kill and maim civilians as they are government troops.This is why there are strict internationally-recognized prohibitions on using improvised explosives, booby-traps, and car bombs off the battlefield and in populated areas – and why people who ignore such prohibitions are called “terrorists.”

Reuters admits that rebels are “channeling” outside donations into “better materials” leading to “more sophisticated bombs,” and that the rebels are fighting for a cause ”that has widespread support [among] Sunni Arab states and the West.” What Reuters fails to mention is what support, if any, the rebels have domestically, beyond extremist Sunnis, and how that support will be affected by filling the streets with foreign-funded, indiscriminate terror and carnage.