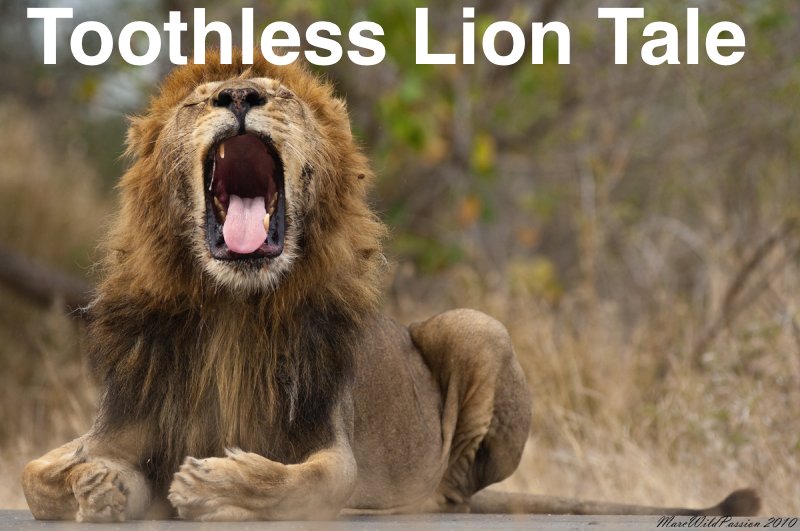 EFCC chairman Ibrahim Magu lamented last Wednesday that Nigeria was losing the war on corruption. It was an honest deposition.

Over two years after being sworn in, despite much talk and relentless over pouring of public support and encouragement, the Buhari-Osinbajo government has failed to lock up a single corrupt politician or their businessmen cronies. Not one. The closest Buhari came to locking someone up was with former Adamawa state governor Ngilari, but he was soon acquitted of all charges.

They say corruption is fighting back. If this is a war then corruption has won. And if this was England, the Prime minister would have resigned. But alas, it is not. It is Nigeria and we must trudge on.

Download Whatsapp version of “The Tale of the Toothless Lion” here.

I’ll list ten notable failures of the Buhari government in tackling corruption and cases where this administration in itself appears to be fighting back on behalf of corruption.

1. The Buhari government has adamantly refused to release names of looters who have refunded parts of their stash in return for a secret amnesty of sorts. In spite of a court order compelling the Buhari government to do so, it has persistently defended these corrupt cabal by concealing their identities.

2. While the Obasanjo government as criticized as it was, was quite successful in locking up dozens on charges of corruption, including Inspector General’s of the Police, and even state governors by first impeaching them and then incarcerating them, the Buhari government appears to lack even a fragment of such capabilities or interests.

3. One of the reasons that have been attributed to the Buhari-Osinbajo government’s failures in fighting the corrupt is its open partiality. The Judiciary is not persuaded to fulfill its obligations when it sees that all you need to do is switch to the ruling party to be protected from probe. The examples are too many to mention. Additionally, prosecutors for this government have deliberately tossed cases by not bringing fellow cabal witnesses or related evidence to court. Saraki and Ndume’s cases are prime examples. Allegations that Buhari removed the names of Dambazau and Buratai from an army probe report, did not help matters.

4. The cases of SGF Babachir Lawal the “grasscutter” and NIA boss Ayodele Oke are perhaps two highly prominent and globally noticed examples of Buhari and Osinbajo’s shamelessness in protecting the corrupt. Buhari has so far shielded these accused individuals from EFCC investigation and punishment for almost a year and continues to. This is a most serious blow to the supposed war against corruption.

5. As I have repeatedly mentioned, Buhari cannot and will never prosecute former NSA Dasuki outside of the media conviction. For the two plus years Buhari has been in office, he has kept Dasuki in an unprecedented state of limbo: locked in house arrest and never brought to court. The case continues to be adjourned indefinitely. An alleged illegal deal negotiated by the Dangotes, Abdulsalamis and Kukahs which granted Amnesty to Goodluck Jonathan is believed to be part of the reason Buhari cannot try Dasuki. Dasuki cannot go down without taking Jonathan with him. And then perhaps Buhari does not wish to prosecute a son of the Sokoto caliphate, regardless of tens of thousands of Nigerians that supposedly died due to his gravid corruption.

6. The games Buhari played on the Halliburton corruption case involving APC party sponsor Atiku Abubakar and cabals Obasanjo, IBB, Abdulsalami and the like, leave little doubt that while tens of thousands of Nigerians are locked up for petty theft, the cabal will go scot free under Buhari. When he was heading to USA, under pressure, Buhari announced the re-opening of the Halliburton case. Upon his return he shut it once again. There is no clearer example of his posture against corruption: the cabal are guaranteed immunity.

7. The whistleblower program has been destroyed. Firstly, the protection of Ayodele Oke and his wife implicated in the over $43 million stash found in an Ikoyi apartment, discouraged whistle blowers. Secondly, cases where money was found but the culprits concealed by the Buhari government, have weakened public trust and hope in the program. The case of N49 million found at the Kaduna airport comes to mind. Thirdly, the EFCC in August conceded that due to the “embarrassment” of misses, it was now reluctant to follow up on blown leads. The program is almost dead.

8. The FOREX subsidy scam, where cabal received emoluments of billions of dollars from the Buhari government in subsidized FOREX is a major dent on the Buhari government. Reuters reported that PDP and APC sponsor Aliko Dangote received as much as $100 million dollars gift from Buhari in just three months. Extrapolated, the effect of the FOREX subsidy scam rivals the fuel subsidy scam of the previous administration. Former Central bank governor and now Emir, Sanusi II lamented that Buhari and his Apex bank governor Godwin Emefiele were making brand new billionaires daily, by running the scam. Not the posture of a government serious against corruption.

9. The refusal of the Buhari government to as much as look at the Panama papers which indicted people like senate president Bukola Saraki and business mogul Aliko Dangote among others, makes it hard to say Buhari is serious about fighting corruption.

10. The ignored cases of Rep member Jubril, Honorable Kopa and Senator Hamma, all openly hounded for exposing suspected cases of corruption in the establishment is a serious dash to the hope in Buhari of fighting corruption. The Buhari-Osinbajo government has not given any support or even faintly resonated with these whistleblowers. Buhari simply turns away, disinterested in investigating the allegations and netting those implicated if guilty. Once you are a government official or power cabal, Buhari will not disturb you, it seems.

In conclusion, perhaps Buhari’s infirmity has left him politically vulnerable and hence afraid to touch the corrupt cabal whose cooperation and support he solicits to retain his office in spite of his being absent form Nigeria for large swaths of time. But for whatever reason, be it by sickness or preference, Nigeria has lost its hope of defeating corruption and seeing the corrupt punished for stealing the future of its citizens.

The starving country must wait till 2019 to fulfill the need to lock up the wicked thieves who have brazenly looted its common wealth and sentenced the masses to pain and death by poverty.