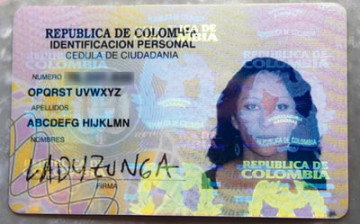 A Colombian woman spent a year fighting government red tape to get her named changed to include all 26 letters of the alphabet.

Tired of the name Ladyzunga Cyborg, the university art lecturer decided she wanted a name that was difficult to pronounce.

The 36-year-old, who lives in Bogota, started the process back in 2012 and finally received an official ID card 12 months later.

She had several requests rejected by the Colombian National Registry after they initially refused to acknowledge the name.

ABCDEFG revealed the reasons behind her decision in a recent interview with Columbian website Las2orillas, saying she constantly feels the need to redefine herself.

“I started looking for a name that nobody had in Colombia, or the world, so I thought ABCDEFG HIJKLMN OPQRST UVWXYZ,” she explained.

“I’ve changed my name so people wouldn’t know it’s me.

Daniel Molano, from the Colombian National Registry, said: “If a civil notary had refused to modify her name in the civil registry, he would have broken his work obligations.

UVWXYZ has a passion for fetish clothes and bondage events, and said she always feels the need to constantly “redefine” herself (EUROPICS/CEN)

“Basically no matter how unusual, this is something that should always be allowed.”

Last year, a woman who changed name to L Skywalker had her passport rejected by the Home Office.