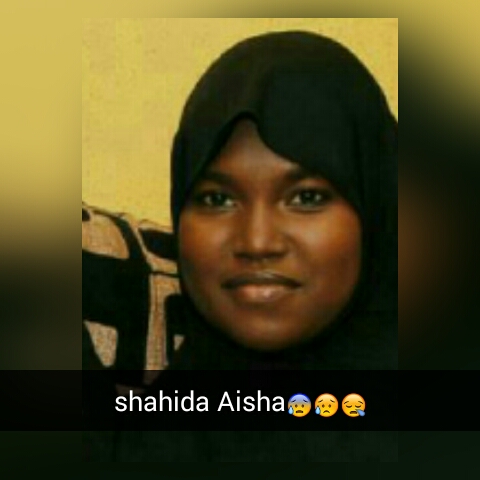 The history of the Islamic Movement of Nigeria will never forget the atrocities of 12th and 13th December, 2015 against them by Nigerian Army in order to serve the interest of Israel and United States, the worst enemies of Islam in the world.

Malama Aishatu Abubakar Zaki was among the thousand members of Islamic movement massacred on that faithful day at Gyallesu, the residence of Sheikh Ibrahim El-Zakazaky when the Nigerian Army laid siege with the intention of killing the leader. His followers were at the residence and prevented anybody that will jeopardize his life.

Malama Aishatu Abubakar Zaki, the wife of veteran and vibrant Journalist Mal. Buhari Bello Jega and their 2 year old daughter Fatima Al-Batool, were all killed by the Nigerian Army. Aishatu Zaki was born on 11th October, 1993  at Unguwar Zango Area of Gwagwalada in FCT. She attended Da’awah Nursery and Primary School from 2000-2006 and later attended Government Secondary School Hajji Camp from 2007-2012.

Late Aishatu Zaki was very honest, humble, trust worthy and was good in human relations; her mother Malama Maimuna Zaki described her as obedient and loyal daughter who was always trying to avoid anything that will offend her parents; devoted her total life to the service of Almighty Allah in terms of night prayers and supplications. She was known for attending both local and national programmes of Islamic Movement in Abuja and Zaria at Hussainiyyah Baqiyyatullah. On her last day she was in Zaria for the programme of hoisting flag to mark the beginning of the month of Rabiul Awwal (Maulud Collebration) where she met her untimely death.

Her mother also described her as someone that was always praying to attain the rank of martyrdom in the course of Islam, adding that after the martyrdom of thirty three members of Islamic Movement including the three biological sons of sheik Ibrahim El-Zakzaky in July, 2014 all the members of her family had written a will, hoping for martyrdom in propagating true teaching of Islam.

The pain and agony of the Martyrdom of Late Aisha Abubakar Zaki remains indelible in our minds, brothers and sisters of Islamic Movement in Gwagwalada area of FCT would continue to feel the pain of Aishatu’s death.

It would be recalled on 12th December, 2015, Nigerian Army stormed the Islamic centre of Islamic movement Hussainiya Baqiyyatullah along Sokoto Road, G.R.A Zaria in the afternoon after ransacking the building and started shooting sporadically on everybody and throwing grenades on the building killing innocent Muslim faithfuls and later claimed that the members blocked the road and prevented Chief of Army Staff, General Tukur Barutai access to pass through the road and also threatened his life just to justify their atrocities. Human rights watch and other Human rights activists, lawyers, political analysts have condemned the attack in strongest terms but the President Buhari neither condemned the killings nor conveyed his condolences to the families of the victims.

My special condolences to the families of Mal Abubakar Zaki the Ameer of Islamic Movement in Gwagwalada who lost five members of his family in the tragedy and other thousands victims’ families, may their soul rest in perfect peace and may the innocent bloods of these victims be a disasters and calamities to the killers and all who contributed to this inhuman treatment.