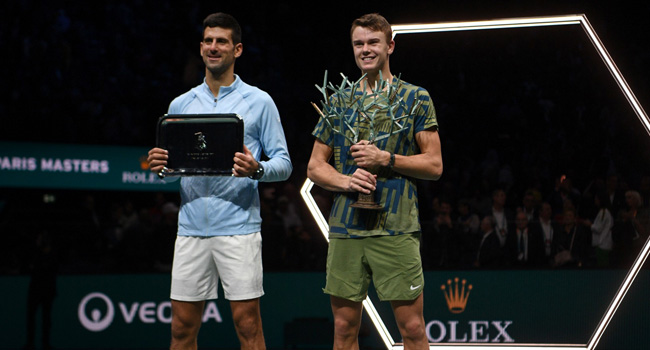 Danish teenager Holger Rune shocked six-time champion Novak Djokovic to clinch his first Masters’ title in Paris on Sunday after coming from a set down to win 3-6, 6-3, 7-5.

Rune, 19, became the youngest winner of the Paris tournament since Boris Becker in 1986 after beating five top-10 players in as many days.

He is the fifth first-time Masters winner this season and will be the first Danish man to break into the top 10 on Monday.

Djokovic had not lost at Bercy since his defeat to Karen Khachanov in the 2018 final, although he did not play at the tournament two years ago.

The former world number one came into Sunday’s final having won 21 of 22 matches since the start of Wimbledon, which he won for the seventh time in July to match Pete Sampras.

The Serb broke for a 3-1 lead as Rune served back-to-back double faults in what was his fourth successive final, but first at the Masters level.

Djokovic comfortably held out to pocket the opening set and looked to have Rune on the ropes when he surged 40-0 ahead on his opponent’s serve in the first game of the second set.

But Rune battled back superbly to thwart Djokovic and then swung the momentum in his favour by immediately breaking to go 2-0 up the following game, which proved enough to force a decider.

The 16-year age gap between the pair was the biggest in a Masters final since Rafael Nadal, then 19, defeated 35-year-old Andre Agassi in Montreal in 2005.

Rune’s inexperience resurfaced when he double-faulted attempting a big second serve to hand Djokovic a 3-1 edge, but the Dane showed his remarkable character to break back straight away.

Instead it was Djokovic who cracked when the pressure was highest, spearing a forehand wide to present Rune with the chance to serve for the trophy