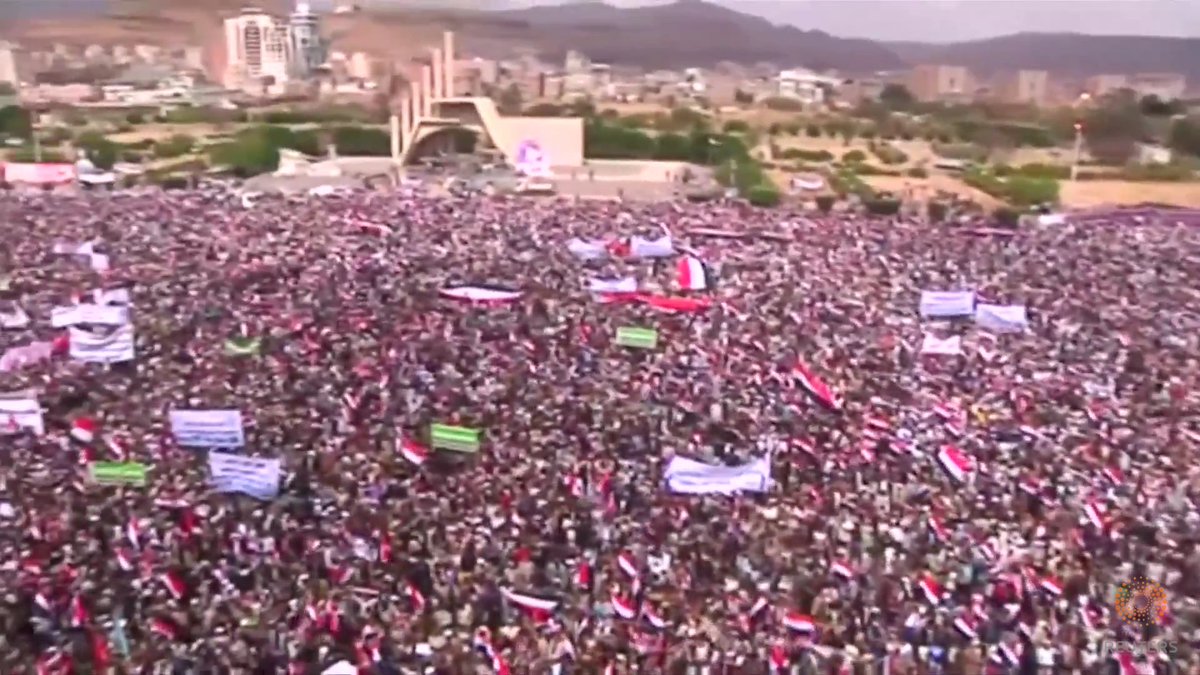 Yemen has entered the third year of a conflict that has claimed well over 10,000 people, saw millions of civilians displaced, and endangered the lives of countless communities across the country.

For all intents and purposes Yemen has been decimated by a military onslaught of gargantuan proportion – one of the poorest nations on the planet versus an alliance of several superpowers. Western capitals have bought themselves several dark chapters in the history books … how they will be remembered, and one may hope judged, will very much depend on how they proceed moving forward.

‘Two years of bloodshed’: Tens of thousands march in #Yemen against Saudi-led #airstrikeshttps://t.co/MTFhgc6UUzpic.twitter.com/dsoGdh0mXs

There are still crimes the world will not stomach without offering resistance. Resistance as it were, is what has animated Yemen for the past two years, and pushed a nation on the brink, to manifest a movement that saw the bending of the might of imperialism.

In this military embrace, Yemen’s rights to think itself sovereign and independent were forfeited so that Saudi Arabia’s hegemonic folly could be quenched. But no matter, Yemen’s story has yet to be written. It would not be the first time a minority came to overpower the multitude majority, Alexander the Great comes to mind.

Let us remember here that it was the kingdom that unilaterally chose to invade Yemen’s skies, and from the comfort of its war rooms rain death on unsuspecting civilians.

#Yemen: hundreds of thousands of Yemenis gathered in #Sanaa to protest 2 years of Saudi bombardments on the country https://t.co/UIHBPtbIwV pic.twitter.com/sN9GdpKyMb

However loudly Riyadh will posit that Yemen’s war is righteous and fair, reason … and hopefully decency, dictate we frown before the slaughtering of a nation whose crime was to argue democratic reforms at the court of a tyrant.

Yemen was earmarked for utter annihilation for it dared speak political self-determination in the face of Saudi Arabia’s grand Wahhabist complex – that monster Western capitals insist on turning a blind eye to so that money could flow freely to its coffers.

I recall how back in September 2015, only five months into this conflict the International Committee of the Red Cross (ICRC) rung the alarm and compared Yemen to Syria – in hindsight I would say that the parallel was uncanny. “In just five months, the country is crumbling into a ‘Syria-level crisis,” read a statement.

After all, like Syria, Yemen has been the victim of wholesale terrorism; only in the case of Yemen, terror was rationalized by the arm that bore it – Saudi Arabia. I will remind readers that slapping a flag and a national anthem on fascism – if we can label Wahhabism under such term, does not legitimize its ideology.

A country interrupted by war, famine, abject poverty and altogether despair, Yemen forever remains the one bleeding scar in the Middle East few media have dared shine a light onto for fear of challenging Saudi Arabia’s media blackout.

It is impossible today to look upon Yemen and pretend that abominable war crimes have not been perpetrated in all impunity. I would personally argue, like many others that impunity in this particular case should be understood as a euphemism for amoral cover-up.

Soraya Sepahpour Ulrich, an independent researcher and author from Irvine, California, put it quite brilliantly in her interview with Tasnim News agency this March when she noted: “What is undeniable is the fact that those who ‘promote human rights’ are the perpetrators of the most heinous crimes, including the genocide in Yemen. To deny their complicity is to deny humanity.”

But there may be light at the end if this tunnel. Hope lies in those truths that are now rising to the surface so that the world could be told Yemen’s war from the perspective of the people.

“The conflict has devastated Yemen’s economy and spurred a humanitarian crisis, with civilians unable to afford shelter, food or medicine, and aid groups powerless to reach vulnerable communities,” writes CNN.

Hope lies in speaking Yemen’s pain out loud so that the reality of Wahhabism – this abomination born in the burning sand of the Nejd (homeland of the House of Saud) could finally be looked upon as the root-cause of terrorism in the world.

Hope lies, bear with me, in identifying those enemies of humanity who, in the name of control, built a terror that’s shadow stretches over the Greater Middle Eastern region today. Yes, I am pointing a very angry finger at Riyadh and its cohort of hate-induced sectarian exclusionist for whom political stability rhymes with genocide.

Hope lies finally in admitting to Yemen’s war reality and the litany of war crimes 26 million souls were made to endure. Dr Riaz Karim, founder of the Mona Relief Organization confirmed to me this March over 18,000 men, women, and children in northern Yemen, have been slain since March 2015.

“Whatever tally the United Nations has admitted to pales in comparison to reality. Reality is harsh in Yemen … much harsher than we can fathom if we consider that seven million people stand today at death’s door on account of famine,” he said.

But the world is catching on at last. At last mainstream media has proven able, and somewhat willing to lift a corner of that proverbial veil, so that, you, the public, be made to connect those dots.

The Mirror writes: “Saudi Arabia’s extreme interpretation of Sharia – Islamic law – is so extreme that it has actually been compared to Islamic State. In fact some commentators pick on the black uniform of Islamic State and the white robes of Saudi-and say the only difference between the two is one if black and the other is white.”

And yes I grant you this commentary was made with the London terror attack in mind but nevertheless.

Terrorism is terrorism wherever it may lie, hide or operate. Whether in the streets of the Old Continent or in Yemen, it is Saudi Arabia’s Wahhabism that has draped nations in suffocating fear. It is Saudi Arabia again that has hold a faith ransom and forced 1.6 billion Muslims to think themselves in negation of one another and beyond the world altogether.

Saudi Arabia’s behavior in Yemen is the very definition of terrorism. Can we please catch on already?

Catherine Shakdam is a political analyst, writer and commentator for the Middle East with a special focus on radical movements and Yemen. A regular pundit on RT and other networks her work has appeared in major publications: MintPress, the Foreign Policy Journal, Mehr News and many others.Director of Programs at the Shafaqna Institute for Middle Eastern Studies, Catherine is also the co-founder of Veritas Consulting. She is the author of Arabia’s Rising – Under The Banner Of The First Imam

The statements, views and opinions expressed in this column are solely those of the author and do not necessarily represent those of RT.