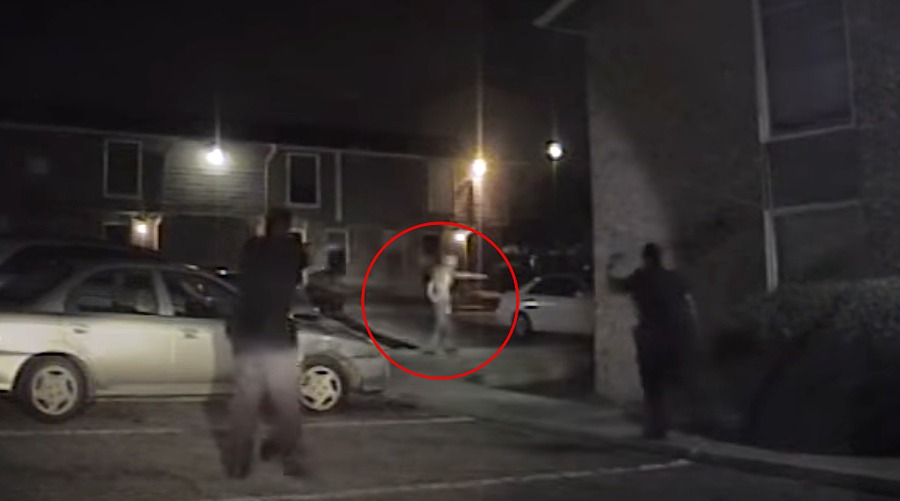 Newly released dashcam footage shows a Fort Worth police officer shooting a man in the back as he walked away. The victim was left a paraplegic, and whether the shooting was justified is up for debate.

The footage shows the police vehicle driving into a parking lot. A man, David Collie, is seen in the car headlights slowing walking away.

The officer is then seen on the left pulling out a gun, and the woman on the right, a sheriff’s deputy, holds up a flashlight. The man is seen extending his left arm and the officer fires, shooting Collie in the back.

The police officers, an off-duty Fort Worth officer and an off-duty Tarrant County sheriff’s deputy, were responding to a report of an armed robbery at a gas station in the area on July 27, 2016.

They had been told a suspect in the robbery had pulled out a silver handgun and robbed someone they had met online and had agreed to meet to purchase items from them.

The suspects were described as two shirtless black men, and when the responding officers saw Collie without a shirt in an apartment complex, they believed he matched the description.

“Mr. Collie was no threat to this officer,” Collie’s attorney Nate Washington told reporters during a press conference on Tuesday to coincide with the release of the video, according to KXAS-TV.

Man Paralyzed After Being Shot in His Back by Ft Worth Police: Lawyer | NBC 5 DFW https://t.co/ZItFS35iwV via @nbcdfw #Blacklivesmatter

Collie’s lawyer decided to release the video after another Fort Worth police officer was disciplined when a Facebook live video went viral. The video showed the white officer arresting a black mother, her daughter and bystander when the mother had called police for help after a white neighbor allegedly tried to choke her 7-year-old son over a littering incident.