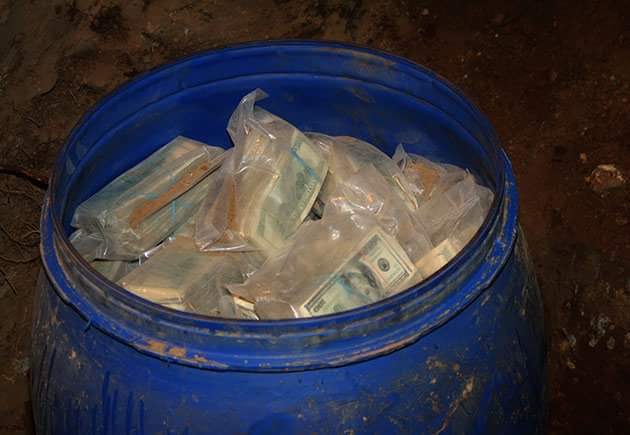 $1m out of the $3m found inside soak-away in Badagry

The Economic and Financial Crimes Commission (EFCC) arrested, Lara, the wife of the immediate past Chief of Air Staff (CAS), Air Marshal Adesola Amosu (rtd), over the arms procurement scandal.

She has been in the custody of the EFCC in Lagos for the past one week. Mrs. Amosu’s arrest followed the alleged discovery of about N3 billion in her bank accounts. She was allegedly holding the money in trust for her husband.

A source informed that other properties traced to the former CAS were also being held by his wife and children. Amosu was arrested some weeks ago by the EFCC over his involvement in the arms scandal. “Shortly after Amosu was picked up in Abuja, his wife, Lara, was subsequently arrested. Investigations conducted showed that some of the monies the former Chief of Air Staff made through some contracts and procurements in NAF were traced to his wife’s accounts.

According to the source: “In continuation of the investigation into the arms probe, the EFCC operatives took Amosu to his residence in Badagry. After a thorough search of the residence, a fresh small ‘soakaway’ pit was discovered in the compound.

The operatives suspected foul play, which informed the breaking of the ‘soakaway’. Surprisingly, $1 million was found in it. The money was subsequently confiscated.”

One of the Nigerian  Air Force (NAF) chiefs implicated in the $2.1 billion arms deal and put under house arrest at Niger Barracks, Abuja has returned N66 million of the N90 million, allegedly traced to him, to the Economic and  Financial Crimes Commission (EFCC). Consequently, the officer, a  Principal Staff Officer at NAF Headquarters, was released from detention and asked to go and look for the balance of the money.

An EFCC source, however, said this did not mean he is completely exonerated. Sunday Vanguard gathered that the other officers being detained by the NAF  High Command, on  behalf of  the EFCC, were not allowed the privileged because they had refused to  cooperate fully with the EFCC interrogation team even though some had returned exotic cars and other valuables.