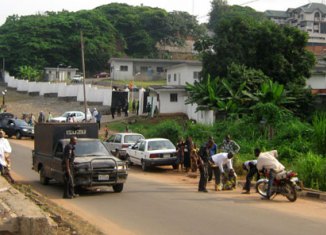 Gone are the days when financial institutions transfer hard currencies from one institution to another almost unnoticed, the seemingly inexorable rise in crime over the years and the fear of the uncertainty has made financial institutions to adopt stringent security measures in the transfer of large sums of money from one location to another. And one of such measures is the use of bullion vans with retinue of police escorts.

In more organized climes, cash less policies have made transactions very easy and convenient, all transactions and purchases are made through the use of credit cards, cheques and direct transfers from one account to another.

This has greatly limited the flow of hard currencies from one location to another in such climes but here in Nigeria, the reverse is the case. The nature of our economy and other factors has made cashless policy an impossible a task.

The nature of our economy is cash driven and since cash is used in almost all our transactions, the demand for cash most times warrants the movement of cash from one location to another.
There’s hardly a day in a week that will pass by without the wails of sirens of bullion vans and their retinue of escorts transferring cash from one location to another.

One won’t be concerned if such movements are done in an orderly way. But the way they ply the roads with their over bloated escorts makes one wonder if we are in a siege.
On the road, they harass and intimidate other motorists who in most cases, not their fault in the obstruction of their convoys.

They don’t obey traffic lights neither do they exercise patients in traffic gridlock, they must find their way out. If it’s possible to ride on people’s cars to get to their destinations, these security escorts wouldn’t mind, they don’t care about the pains they subject motorists and other road users to. On daily basis they exhibit their lawlessness on our roads through the firing of gun shots into the air to scare motorists away, at other times they use sticks to hit on cars they think are obstructing traffic or use their whips on such drivers. Road users are not left out too. Most times in trying to avoid those convoys, motorists end up involving themselves in serious accidents.

Scores of other road users have also bemoaned their losses over such inexcusable acts from security escorts of financial institutions.
From Owerri to Asaba, Oshodi to Otukpo and Potiskum, the story remains the same across the federation.

A bullion van attached to about 3 or 4 hilux trucks filled with stern looking armed police men cannot obey traffic rules and you wonder why the hurry with all those heavily armed police men? Who will attack a bullion van in a hold up surrounded by unbearable large security escorts?
In as much as financial institutions need security escorts in carrying out such a task, must it be at our own detriment?

Our economic activities shouldn’t be brought to a halt because banks are transferring money from one location to another. Carrying out such a task in a decent manner won’t make those security escorts less human neither will it devalue the currencies on their vans.

Motorists all over the states are even becoming more scared of securities attached to bullion vans than that of their number one citizens.

Nigerian motorists are humans and should be treated as one, if all road users who are being subjected to untold hardships and torture on our roads on daily basis decides not to patronize banks, I wonder if there will be any need for movement of money from one location to another.

Both Federal and State governments should not feign ignorance or treat such salient issues as though trivial, our financial institutions need to be cautioned and if possible, enforce laws that will regulate their excesses on our roads. It will go a long way in restoring sanity on our high ways.