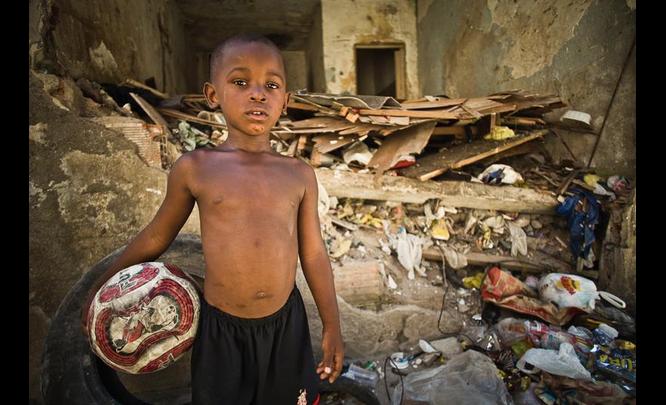 People who have seen the film “Escape from New York” will no doubt remember it. In the film, due to the rising crime rate in America,  Manhattan Island in New York is surrounded by walls and barbed wire and turned into an open-air penal colony. Criminals are left to fend for themselves there under the most primitive conditions. While life continues as normal in the rest of the country, it turns into a living hell in the part behind the barbed wire.

Let us now image for a moment that this movie has become real life. Let poor people replace the criminals in the movie, and let organized criminal gangs  be in charge of these areas.

Let us imagine that the state can only enter these areas accompanied by tanks and troops, but is still unable to put an end to crime.

Let us also imagine that these areas exist in a country’s world famous cities. And let these nice parts of the city be separated from the slum areas by huge walls and barbed wire.

Let us imagine that the wealthy families are still able to enjoy a life of luxury in their  estates, while there is no infrastructure at all in the ghettos.

Let us imagine that the life in all this country’s cities have become a nightmare because of theft, muggings, kidnappings, gang wars, looting, corruption and torture. Let us imagine that human rights are flagrantly ignored as the security forces use violence to deal with incidents. And let the vast gulf between rich and poor be evident at a single glance.

These bastions of poverty  shown in the photos are actually in Brazil. Ghettos known as ‘favelas’ exist in all the cities of the country, and especially the two largest; Sao Paulo and Rio De Janeiro. For example, four million of the thirteen million people who live in Rio de Janeiro are struggling to survive under adverse conditions in some 1,000 favelas. The favelas were first constructed toward the end of the 19th Century for soldiers in need of accommodation. Slaves from Africa and poor people later settled in them. Favela construction was initially supported under the influence of local leaders within the state. The aim was to remove poor people from the cities and force them to move to rural areas. As a result of assorted economic crises in the country, however, migration to the cities picked up speed after the 1970s; as a result, the fact that almost 15 million of the 200 million people of Brazil  found themselves living in favelas with no infrastructure revealed itself. According to Brazilian Geographic and Statistical Institute figures, 6% of the total population are living in primitive conditions in these slums.

THE UNENDING VIOLENCE AND INJUSTICE IN BRAZIL

Brazil, depicted as an attractive destination because of its samba and football, is in fact one of the most dangerous countries to visit.

The federal government, state governments and the military are equally powerless to halt the ongoing  violence because these areas are like separate states with their own laws and rules. Organized criminal gangs  are better armed than the police. Corruption, illegal support for the gangs  from within the police and military and unstoppable crime have turned Brazil into a nightmare.

On the other hand, there are almost never any investigations into violence and torture by the police, military or military police. Amnesty Internal says that the police use excessive violence in every incident. The Candelaria Massacre – in which the police killed eight children throwing stones at their vehicles in 1993 – is just one example. There has still been no inquiry into the 84 police who caused a massacre when using force to put down a prison uprising. Although Police Colonel Ubiratan Guimares, who caused the deaths of 111 detainees by ordering the use of weapons, was sentenced to 632 years’ imprisonment, he was subsequently elected as a deputy and entered Parliament. The senior court responsible for trying members of Parliament then overruled the initial local court.

Human Rights Watch reports the widespread use of torture in Brazilian prisons. The organization describes torture as a chronic problem in the country. Dilma Rousseff, a former Marxist guerrilla and now Brazilian head of state, is just one of those who was subjected to beatings and electric shocks in Tiradentes prison where she was kept for three years in the 1970s. The most pitiful admission regarding the problem came from Minister of Justice Eduardo Cardozo, who is also responsible for prisons. In a statement in 2012 he said, “…if I had to spend many years locked up in one of our prisons, I would rather die. We have a medieval prison system that not only disrespects human rights, but also makes rehabilitation impossible,” thus revealing the true face of Brazil.

These words by Amnesty International’s Brazil researcher Tim Cahill also reveal the situation in the country, “In a country that sees thousands of extra-judicial killings every year at the hands of security officials and where many more are tortured in police stations and prisons, this ruling (that protects torturers)  clearly signals that in Brazil, nobody is held responsible when the state kills and tortures its own citizens.”[i]

THE ENORMOUS GAP IN INCOME DISTRIBUTION

Although the Brazilian economy appears to be growing, inequality of income in the country is on a par with that found in some parts of Africa. Along with those excessively increasing their assets, there are also those living in extreme poverty. The state is unable to set aside sufficient funds for the well-being of the unemployed or for those working as domestic help or as laborers in elite areas.

Although Brazil moved to a republican regime in 1889, powerful states and local leaders were still the ones who called the shots. Indeed, one of Brazil’s main problems is that the local elites have a great many more rights than the ordinary population. The country broke away from being a Portuguese colony and declared independence in the early 19th Century, and now consists of 26 states and one autonomous region.

Efforts are made to govern the country by keeping federal regions together under a presidential system. States are divided with numerous parties, and state assembles are therefore run under multiparty coalitions. States and local municipalities have broad powers and rights, but Brazil fails the test when it comes to security in the ghettos and the cities. Brazil is one of those countries with the widest rift between lowest and highest per capita incomes. Although average income per capita in the country as a whole is $13,000, that is not distributed equally among the people. Per capita GDP in different states ranges between $5,300 and $46,000. The poor make up some 35% of the population in the country.

THE PRESIDENTIAL SYSTEM THAT TURNED INTO A DICTATORSHIP AND JUNTA REGIMES

From the 1930s, Brazil was ruled by the Vargas dictatorship. Following a failed communist revolution in 1934, the country turned its back entirely on democracy. Under the Vargas dictatorship, the country began being run under ‘corporatism,’ a system with  a striking similarity to  German and Italian fascism. This system, which is deep seated in the Brazilian state to this day, still influences the machinery of government. According to a report by Transparency International, an NGO that investigates corruption, Brazil stands 69th out of 178 countries. President Collor – who came to power after a coup – left office when corruption totaling $2 billion came to light.

Democracy developed almost not at all up until 1945. Although a new president was chosen following elections in 1945, there was still no progress toward democracy. The country was run by the military for 21 years between 1964 and 1985: That era was a classic junta  unique to Latin American countries that are ruled with presidential systems. During this period, although presidential elections were not held, congressional elections were held but  power remained in the hands of the military and the elite. For that reason, this system of government is known as the “bureaucratic-authoritarian model”; Chile’s Augusto Pinochet referred to his variant of the model as “authoritarian democracy”. Although Brazil switched to a democracy since 1991, the effects of the junta regime can still be felt in all the institutions of state.

As an example of that influence in 2010, President Lula Da Silva recommended that ‘Truth Commissions’ be set up to investigate human rights violations during the time of the junta regime; that resulted in a fierce reaction from the army. The minister of defense and chiefs of the forces threatened Lula with resignation. That same year, the Federal Supreme Court came up with a different interpretation of immunity, thus shielding politicians who should have been investigated. As a result of this, there has never been an investigation into any crimes committed under either the dictatorship or the junta.

On the other hand, there is an important difficulty confronting presidents in Brazil. Majorities generally fail to be established in the legislature, and that gives rise to coalitions. The number of parties in coalitions has never fallen below four since 1985. Indeed, eight parties took part in the coalition established in 2004. This is one important indication that proves that the presidential system in Brazil does not work. Disputes among parties in coalitions inevitably block the system.

As in other countries, the presidential system has failed to solve the problems in Brazil; on the contrary, it has resulted in their becoming even more acute. Just like  in the other Latin American countries, this system has led to an even harsher and more shameless secret state apparatus.

What befits the cheerful, wholehearted, bright Brazilian people is the highest level of democracy. The highest level of human rights befitting this fine nation must at once be established in the country. Freedoms must be preserved and the inequality of incomes must be addressed through policies of love. The best way to do this is through rebuilding a new Brazil with a more pluralist administration and a more transparent conception of democracy.