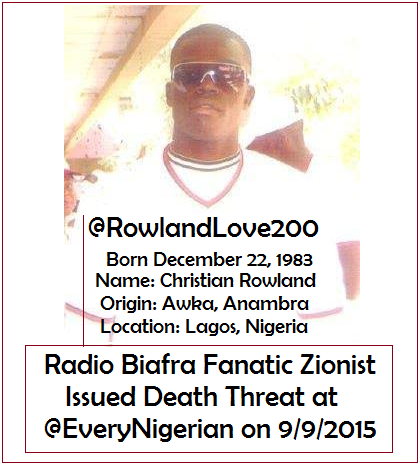 This serves as a public notification of a death threat issued by Radio Biafra on my life and innocent members of my family. The threat in the form of a public tweet was made by a certain @RowlandLove200, real name Christian Rowland a 31 year old male from Awka, Anambra state; Facebook https://www.facebook.com/christian.rowlandlove , who said, “@EveryNigerian I pretty u, soon biafrans will hunt u and kill you the matter is getting personal and your family too and wipe them all off.”

@EveryNigerian I pretty u, soon biafrans will hunt u and kill you the matter is getting personal and your family too and wipe them all off

For exposing the Radio Station’s numerous broadcasts recruiting terrorists and directly advocating the murder of random innocent Hausa’s and Fulani’s dwelling in Igbo states and the murder of Nigerian soldiers, Radio Biafra members have now issued death threats to me.

As anyone must, I take this extremely serious and alert the Nigerian and international security departments to secure the lives of me and mine and all innocent citizens who the Radio Biafra menace continues to put at risk and distress.

I published and have here provided audio recordings of Radio Biafra shows where the so-called and self installed leader of Radio Biafra pro-Biafra zionist agitators, Nnamdi Kanu broadcast direct death edicts against innocent Nigerians. In one recording a certain London-based Uchechukwu Madueke made it known that his brother, a certain Michael ‘Madueke’ had gone to Nigeria from India and promised to kill any random Hausa he found before he returned to India. Other parts of the recordings expose Nnamdi Kanu issuing death threats against Nigerian soldiers and recruiting deadly weapons manufacturers for his sinister plots against life and security of Nigerians. This is serious.

While I am an advocate for self determination and I have stated clearly and repeatedly that I support a true globally monitored intellectual referendum in Igbo states to determine if there is a reasonable desire for independence, I have no hesitation in rejecting and condemning all propositions and advocacies for murderous and violent agendas for self determination which are ruses for self enrichment and megalomaniac fulfillment. Which is what Radio Biafra’s crazy director seeks.

It is also publicly known that I condemn the deaths of August 30th at Onitsha and support the full investigation and justice measurement on whoever the culprits are, be they the police, navy or Radio Biafran covert conspirators.

I have never hesitated in waging a war against Boko Haram terrorists and their sponsors and have done so for the better part of the last three years and in like fashion, while a rest will be well in order, I am obligated in the interest of preserving lives to continue an identical war against Radio Biafra and associated brainwashed and Godless blood thirsty terrorists.

Nnamdi Kanu of Radio Biafra has been recorded harassing innocent northerners in Igbo land in the past. Radio Biafra as can be heard in a recording of our debate was in full support of former president Goodluck Ebele Jonathan who they call Igbo and his army chief, Azubuike Ihejirika, both of whom with the NSA Dasuki and MoD Gusau, together plundered Nigeria silly and supervised the raping of our army and deaths via Boko Haram and military excesses of thousands of Nigerians of all ethnicities and denominations, the maiming and displacement of millions and the destruction of billions in property. I ask, is Radio Biafra a proxy terror organ of the former administration hell bent on frustrating Nigeria’s final hopes of progress after 30 years of PDP and it’s godfathers’ plundering and destruction of Nigeria?

While requesting assurances of our and other innocent Nigerians’ security by enforcement agents, we assure Radio Biafra and its blood thirsty terrorists that we will never be intimidated, we will die to protect innocent life, because what if those random people they advocate the killing of happen to be us?