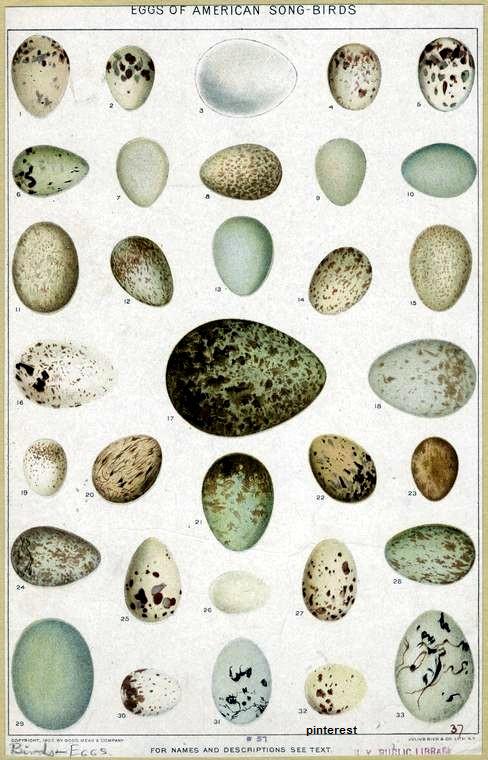 Modern science has discovered and to some, confirmed that the earth is egg shaped. Other synonyms for its unique shape are, ovoid, pear shaped or piriform.

On the NASA government website we see this description:

Exactly how round is the Earth?

The shape of the Geode, as it is called, is nearly a perfect sphere, but because the earth is spinning, it is about 21.5 kilometers flatter at the poles, and bulged-out at the equator by about the same amount. There are also other ‘higher-order’ shape deviations which make the Earth slightly pear- shaped with a larger southern hemisphere surface area than in the northern hemisphere, but at a level of a kilometer or so in radial girth. The biggest effect, though, is its polar flattening. If you had a basketball to represent the Earth’s spherical average shape, the flattening would be 21/6500 = about 1/300 the radius of the basketball or 1/32 of an inch…give or take. From NASA: http://image.gsfc.nasa.gov/poetry/ask/a11818.html

The Muslim holy book, the Quran, stated this explicitly 1400 years ago:

Now I will write word by word meaning of this Aya

Now see the English translation of the Sura 79:30“And the earth , moreover, hath he extended in egg shape.”

The origin of the verb, “Dohaha,” is found in the word (Ud-hiya), which means “egg of ostrich” -wikipedia

Geodesy(Study of the shape of earth)

It is important to note that over time, people and science have had varying views of the shape of the earth. These have ranged from flat, to round, to spherical, to oval, to oblate spheroid or ellipsoid. Needless to say, many have been entangled in the web of wrong descriptions. However not surprisingly some spiritual books had the peculiar shape dead right from the start.

It is important at this point to differentiate spherical, from ellipsoid/oblate spherical and then from egg shaped or pear shaped ovoid.

It was actually way back in 1958 that U.S. satellite Vanguard 1 discovered the Earth’s pear shape. 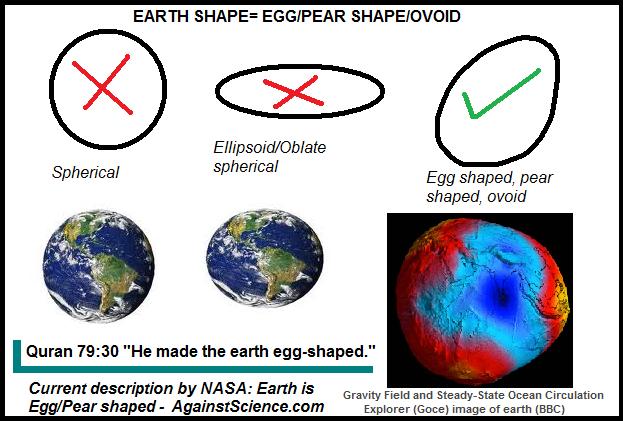 “By the 16th century people were convinced that the Greeks were nuts and the Earth was actually an oblate spheroid, or an ellipsoid. The French didn’t agree. They went one better. They suspected the earth was an egg (again?) and in 1736 the French Academy of Sciences sent two expeditions, one to Lapland and one to Ecuador, to settle the question of the Earth’s shape once and for all. Their findings were close, but not exactly conclusive.

We now know from the latest scientific evidence and NASA’s satellite data that the Earth is indeed an ovoid, give or take a few bumps. So back to the egg. After all those years and a few billion dollars down the gurgler we have discovered what the ancients already knew 6000 years ago.

The Earth is slightly flattened at the poles.  Its equatorial diameter is 45 km (28 miles) longer than its polar diameter. But wait, that’s not all. As well as being generally ovoid, the Earth also has a vertical pear-shaped asymmetry, the north pole being 48 m (148 ft)  further from the equatorial plane than the south pole.”  The “pointy end of the egg “, so to speak, is at about 37° west longitude (400 km off the eastern tip of Brazil) where the equator’s longer axis is 159 m (522 ft) greater than its short axis. The “fat” end is just north of east Papua New Guinea. Source The earth is actually more egg than pear shaped. This is because a pear has concavities, while an egg does not. The earth does not have concavities.

More resources that describe the pear or egg shaped earth as it is now known:

http://lro.gsfc.nasa.gov/moonfacts.html
+ The moon is not round, but egg shaped with the large end pointed towards earth.

The Muslim Quran further describes the earth spread out like a carpet. This is said to describe the the tectonic plates, above the magma. These plates are like a carpet on which people walk and travel.

It is arguably beneficial for scriptural folk to hold on firmly to their beliefs, as after a merry go round, science usually gets to the point they were at. This is just one more example where science has come back to the point where the Muslim Quran was at.