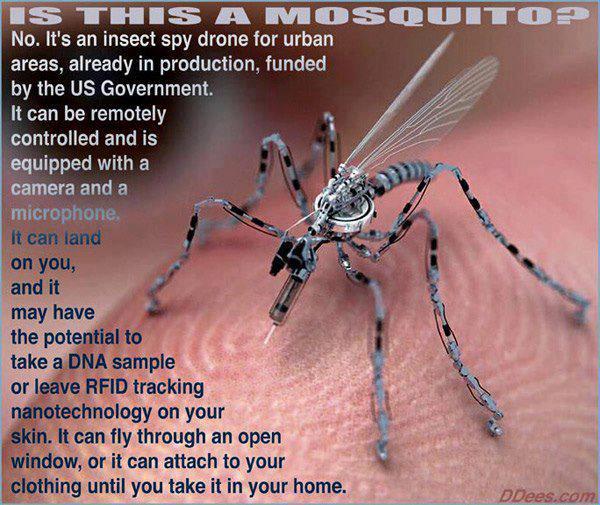 NewsRescue- Ever thought about the responsible guys, doctors, engineers and the like, who suddenly seem to go gaga and engage in the most ridiculous acts of terrorism or conspiracy to engage in terror, and you wonder how these smart people could suddenly engage in sometimes, pretty retarded and bound-to-fail plots?

Or ever thought about the activists who suddenly die, or commit suicide?

Well perhaps, someone first used a remote device to inject them with a psychotropic agent, that caused impaired mental functioning, or led to their death.

Ever had a creepy feeling that someone was watching you?

The image below is not a mosquito. It’s an insect spy drone for urban areas, already in production, funded by the Government. It can be remotely controlled and is equipped with a camera and a microphone. It can land on you, and it may have the potential to take a DNA sample or leave RFID tracking nanotechnology on your skin.

It can fly through an open window, or it can attach to your clothing until you take it in your home.

And for all you who automatically say “fake” because you don’t think the government is funding this… do some research.