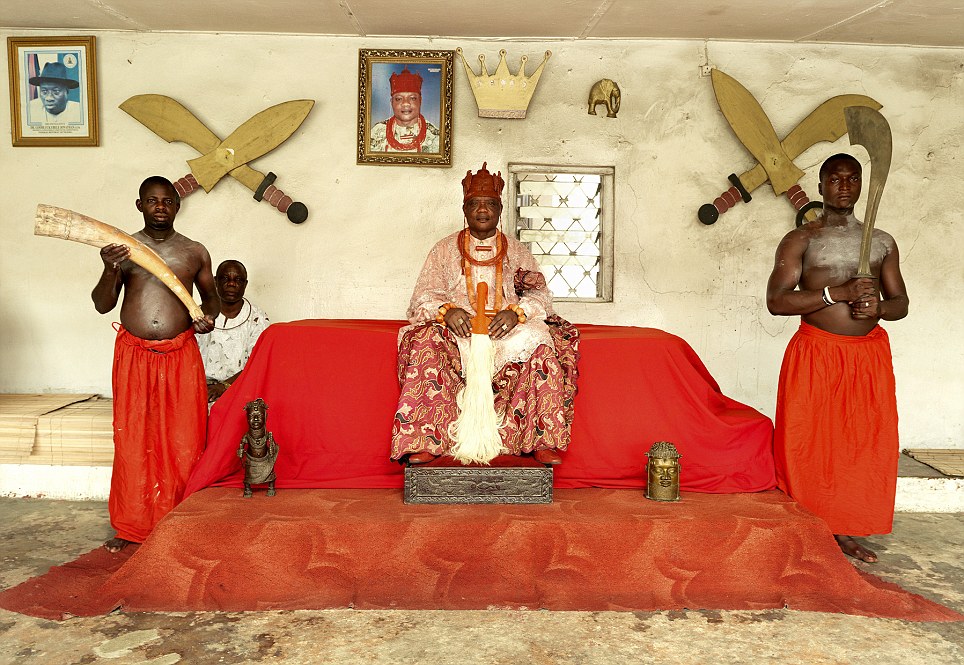 With their brightly coloured robes, ornate thrones and legions of flunkeys attending every whim, they seem every bit the archetypal African kings.

Nigeria’s traditional Monarchs may have been stripped of their powers half a century ago, but they appear to have lost little of their regal pomp and splendour as this fascinating series of portraits shows.

Photographer George Osodi toured the west African country extensively for a series of photographs entitled ‘Kings of Nigeria’ which is due to be exhibited at London’s Bermondsey Project in October.

SCROLL DOWN FOR VIDEO Posing on his ornate throne, Alhaji Dr Ado Abdullahi Bayero is the current ‘Emir of Kano’, a position he has held since 1963. A former ambassador to Senegal he is renowned for his abundant wealth, which has been amassed by investing in the stock market and agriculture Robes of office: HRM Agbogidi Obi James Ikechukwu Anyasi II, ‘The Obi of the Idumuje Unor kingdom’, was until his death earlier this year, the longest reigning African Monarch. He was crowned king on October 9, 1946 at the age of 22. His robe, depicting a young Queen Elizabeth, gives a clear nod to the period of British colonial rule Out for a ride: The Emir of Kano Alhaji Dr Ado Abdullahi Bayero is attended by aides as he sits on the back of his vintage Rolls Royce on his way to the Central Mosque in Kano

As a well-known and celebrated Nigerian photographer, Mr Osodi was granted rare access to the palaces and throne rooms of these hereditary rulers who now serve as living repositories of Nigeria’s enormous cultural heritage.

He told Al-Jazeera: ‘There are frequent clashes among different ethnic groups… Lots of people have lost trust in their identity. I felt it was important that we see this diverse culture as a point of unity instead of seeing it as something that should divide us as a nation.

‘The easiest way I could approach this was to look at the monarchy structure in the country because they are closer to the people than the governors.’

While their ancestors ruled over vast tracts of Africa, following the abolition of the monarchy in 1963 the regional monarchs were stripped of all their constitutional powers.

But far from fading into obscurity, they mostly remain popular leaders and are held in great regard by their hundreds of thousands of loyal subjects.

And despite lacking any formal powers they continue to wield considerable influence and serve as unofficial intermediaries between their subjects and the Nigerian government. His Majesty, Wilson Ojakovo Oghoghovwe Oharisi III was made the ‘Ovie of Ughelli’ in 1980 and has ruled over the great kingdoms of Ughelli and Urhoboland for more than 33 years Alayeluwa Oba Okunade Sijuwade, the current ‘Ooni of Ife’, relaxes in his throne room.  Born in 1930, he has enjoyed a colourful life first working for his father’s business, then with the Nigerian Tribune newspaper, before attending Northampton College in the United Kingdom where he studied business management. In 1963 he became Sales Director of the state-owned National Motor company in the Nigerian capital Lagos. He later formed a company to distribute Soviet-built vehicles and equipment in Nigeria His Royal Majesty Oba Oyetunji Jimoh Olanipekun Larooyell, the ‘Ataoja of Osogbo’ in southwest Nigeria. He worked as a teacher for many years, firstly at a baptist day school. He was crowned king in 1976 and rules over some 300,000 subjects. He has studied management in London and is a qualified chartered accountant Born to rule: Sitting on his golden throne, Benjamin Ikenchuku Keagborekuzi I is the current ‘Dein of Agbor’. Just two years and four months after his birth in July 1977 he was crowned king following the the unexpected death of his father. It meant he was the youngest king anywhere in the world. He is currently the Chancellor of the University of Ilorin, one of Nigeria’s most prestigious universities Omo N’Oba N’Edo Uku Akpolokpolo Erediauwa I (left) was crowned ‘Oba of Benin Kingdom’ in the Edo state of Nigeria in 1979. Before that he studied at Cambridge university before being appointed to many top government posts. Alhaji Abdulmumini Kabir Usman (Right) is the current and 50th ‘Emir of Kasina’. He was coronated in 2008 five days after the death of his father, Emir Muhammad Kabir Usman. He is remembered as a peacemaker during the Nigerian civil war and has a passion for Polo His Majesty, Deinmowuru Donokoromo III, The ‘Pere of Isaba’, poses with his royal sceptre outside his palace. He has ruled over the Kingdom of Isaba  in the oil rich South-West area of Delta state since 1983