NewsRescue- Perhaps not yet completely, but in just a few years they will have. And with that will go all the jobs you know today, literally jobs for billions are being processed to be handed over to machines in another 5-10 years.

We are talking about Artificial Intelligence or simply AI. AI is adaptable, responsive and intuitive computer functioning. It’s when computers can literally receive, rationally process the information and then deliver based on a human-like analysis. There are lots of exams and teaching aids today that are AI operated. They review performance and adjust based on the test takers skills, to suggest or offer the next questions or end the exam in relation to the level of knowledge.

But the type of AI Eric Schmidt promised his audience that Google will be able to deliver in another 5-10 years is way more amazing. The AI Google has been working on and will soon complete, is software – with quantum computing – that can read, listen amend respond just as we do. And can also learn as we do. Actually can learn several times better and faster than we could ever dream of. Remember the Jeopardy TV game-show, where IBM’s Watson AI beat one of mans smartest contestants? Eric has said at a recent Zeitgeist meeting, he soon would like to be represented at social functions with a social robot clone of himself. he added, “these things are being built.”

Eric Schmidt on the “state of the world,” with social robot clones

Buy Google AI engineering software for instance, and you wouldn’t need 3/4ths of your company’s engineers. Just tell your Princeton, Harvard, Cornell and Princeton first-class with honors, Google AI engineer software what plan you want, and it will draw up and email you the plans in a few minutes, not the months your engineers usually, hopefully send them in by.

Invite your AI to a board meeting and it will offer a host of suggestions on topics discussed, based on its wide range of experience drawn from meetings across the world and across the centuries, depending on the spec of AI you could afford.

Pricing: Let’s imagine an AI of the nature described above is $30-40,000, with lifetime software and information upgrades. Don’t think this is not affordable. A typical engineer in the US is paid $60-120,000 per year. Your AI will replace not just one engineer, but no less than 5, for life at the cost of half the salary of one, and with none of the lunch breaks, days off, holidays and conflicts. And these AI’s that are currently being trained on all that material and interaction that we put for free on Google and Facebook, could even be sold for much less.

In a lecture we have published, (“The Centers!” Get ready For a Future Without Offices), delivered by the WorldWealthSociety.com in New York, the speaker said doctors are going to be replaced by AI’s, with physical exams done by nurses or Physician Assistants when needed. At the best, there’ll be one or two physicians to review the final analysis and prescriptions recommended by the AI’s.
All those customer service calls that were diverted to call centers in India, are coming right back to AI call centers or your AI if you have a company and can afford it. University studies have already found computers to be 42% better in diagnosis and treatment including correct prognosis, than doctors, and at one third the price. Your Aps will be your doctor soon.

Don’t think your cab drivers or cab driving job will be spared. Have you seen the ‘driver-less’ cars being deployed in various countries? These are not built to ease you from the ‘burden’ of driving. Once those cars are fully tested and proven to be – as we can reasonably expect- safer and more traffic obedient than human driving, they will replace all conventional cabs, and cab drivers would join the rest of us on welfare at the shelter. 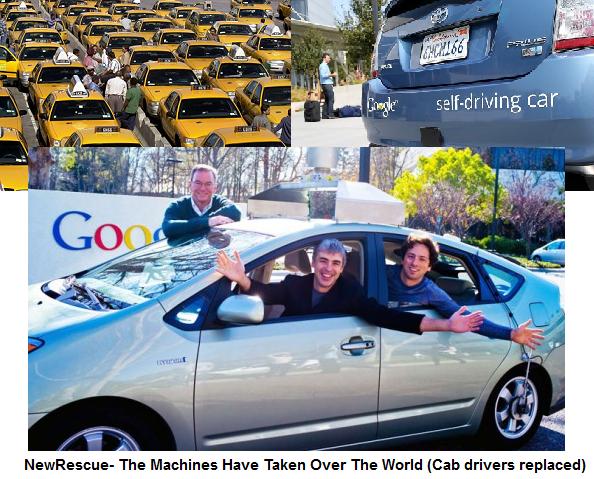 AI’s have already taken over at many malls where there is ‘self-checkout,’ and with AI self driven pedestrian carts, markets in the near future might be quite different than what we are used to today. Remember how mechanized farming took over the jobs of 95% of our farmers?

These changes have already started happening. It’s no longer a question of ‘if,’ it’s how long do we have left at our jobs? And giving a reasonable estimate, with the amount of record human interaction, the rapid advances in computing technology and the capitalistic desire to maximize profit with the least overhead, we can estimate that in 10 years max, at least half of the employments that hold today will be permanently terminated and taken over by AI’s.

NewsRescue will personally use one to write our articles. That would save us all this thinking and typing. Just hint it the idea of the article and it’ll draft several editions, based on its perfect understanding of our authors’ rationalism’s and writing formats. AI article writing is already happening today. AI’s are on fora and other online media, chatting and giving responses. Engaging and flirting.

A lot of new generation youth prefer texting to verbal communication. In a few years, personality coded AI’s will be deployed to complete all ‘unessential formalities.’ To get to known the person and rate him or her, before you switch over more often. Personal e-Harmony.  And whenever you hit ‘tired,’ mode on your phone, your AI takes over again, only alerting you with time dependent or other critical prompts in the conversation with your friend – or their AI.

They will be used by perverts to randomly text numbers and open conversations to seek the vulnerable. These things are already developed, they are already in use. Human behavior is 99% pattern and only 1% innovative spontaneity. And even your dynamism can easily be programmed once your conversations over a couple of months are fed into an AI.

As much as you love that android phone, that IPad, that windows phone, remember that this beautiful technology that you utilize only for fun and see as a great tool of social networking, is soon going talk to you, to seduce you, to fool you and soon if not already, going to take your job.

Welcome to that future you watched in all those movies.