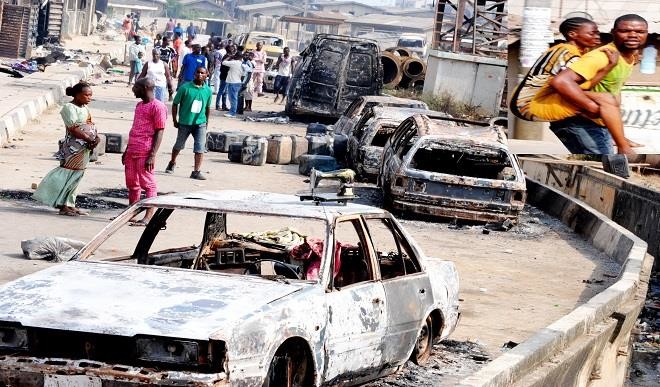 I remember that while growing up in Lagos as a child and teenager during the 1990’s and the first decade of the new millennium, the mile 12 ethnic pogrom and NURTW frequent riots are prominent signatures of violence in the centre of excellence. The frequent clash between the Yoruba and Hausa community in the popular Mile 12 market and its environs dates back to time immemorial, but Fashola’s administration seemed to have casted a magical spell that putted a stop to all of that during the eight years tenure of the administration, at least not as frequent and disturbing as we used to have.

There seems to have been a reawakening of these shameful acts of incessant violence in Lagos recently. The recent ethnic clash between Hausa and Yoruba communities in the popular Mile 12 Market on Thursday, March 3, 2016 left about 15 people dead and several others injured. Several houses, churches, and shops were destroyed and looted. It was the deadliest in the history of the notorious Mile 12 market violence. Many residents of the area had to flee their homes with many losing their means of livelihood to the ugly incidence.

On Wednesday, March 2, 2016 a fracas broke out between two factions of The National Union of Road Transport Workers (NURTW) in the Oshodi axis leaving one person dead and disrupting commercial activities in the area for several hours. Another riot broke out in Ikeja-Along area of Lagos/Abeokuta expressway on Friday, March 11, 2016. This was allegedly in connection with the NURTW fracas.

All these happening within ten days make one begin to wonder how Governor Akinwumi Ambode has been managing the security of Lagos State. I believe if we are not going to move forward we should do all in our powers not to retrogress to our earlier messy condition as a people. Yes, the Ambode administration bought some helicopters and patrol vehicles for the Lagos State Command of the Nigerian Police Force recently. But the question is what has been the security impact of this spending on the security of lives and property in Lagos State? One of those RRS helicopters was used to convey some APC party chieftains to the coronation ceremony of the Ooni of Ife. I guess that’s part of their security uses. The order and security of lives and properties in Lagos state has not gotten any better since this present administration assumed office.

Effective administration and security of a state goes way beyond giving orders and shutting down institutions in times of crisis. Government needs to take pre-emptive measures to tackle issues and always keep an eye on any potential causes of violence. Government needs to form a synergy between itself and the various communities, institutions and organisations that make up the society. In order to address the social disorder, high crime rate, and environmental disaster, that had plagued the Oshodi axis for several decades, former Governor Babatunde Raji Fashola held several meetings with the NURTW and some of its chieftains amongst other concerted efforts that gave birth to the enviable state of Oshodi and its environs today. As John Maxwell said, “Leadership is influence.” A leader must be able to influence the led to fall in line with his visions and intentions. The Fashola administration had a clear philosophy and approach to societal development. Although this may have been frowned at by many, the general acceptability of that leadership frame work and philosophy was attested to by the overwhelming electoral votes that secured that administration a second term in office. It is pitiable that the same cannot be said of the present administration.

Concerning the Mile 12 pogrom and other recent instances of violence in the state, security agencies have to make sure they track down every single person involved in those shameful acts. Security service in this country needs to outlive the status quo of sweeping to the scene of violence and arresting a few people on the spot, some of whom may be mere passers-by. And people who have committed heinous crimes go scot-free under the guise of “it was a riot or mob action.” If we are in anyway serious about putting a stop to incessant violence in this country, the police and other relevant security agencies have to get to the root of these matters, arrest, and prosecute everyone that helped fuel those acts of violence. Perpetrators of crime and senseless violence in this country have to be made to understand that you cannot fuel violence and commit crime against the society and go scot-free.

Dara Adenekan is a creative writer and editor, a trained linguist and freelance writer.