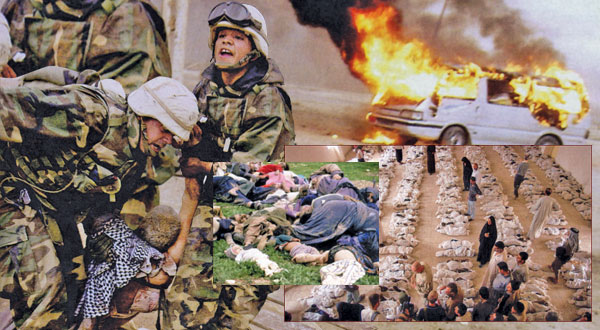 The silly Western media chatter about the “Arab Spring of Democracy” is now silent. The new silly chatter in the U.S. media is all about the “Failure Of The Islamist Revolution” and other bits of chit-chat. Some of these tweeters even think the U.S.-Egyptian Army Massacre In Cairo has “swept away” the islamist Jihad against the U.S. and brought the U.S. totalitarian puppets back to power for the long run.

All great revolutions generate counter-revolutions by many of the die-hards of the ancient regime that is being overthrown. The die-hards in Egypt, notably the military leaders working with and being paid for by the U.S. in the guise of “foreign aid,” are acting out of desperation, not out of reason and hope. The Egyptian military has for decades pretended to be above using force against the people of “the street.” That pretense blew up in the last twenty four hours and is gone with the winds of war and military slaughter in the streets throughout Egypt.

The Islamists are growing steadily in the vast Muslim population. All  the big Muslim nations of the Middle East–Turkey, Iran, Egypt–have gone Islamist in democratic elections and are totally anti-American in fact [often hidden behind a shield of polite and reasonable diplomacy]. The U.S. and its puppets are desperate and are striking out wildly in slaughters and massacres of the Islamists that enrage the Muslims everywhere. The Shia government of Iraq allied with Iran is being attacked by U.S.-Saudi financed bombers–”Terrorists” in U.S. agitprop. This Shia government may give way to a more openly Islamist government headed by a Holy Warrior like al-Sadr allied with Hizbollah of Lebanon and Syria.

The oil sheik tyrants in Saudi Arabia, Bahrain, Qatar and a few other tiny states in which the governments are hated by most of the people are the only U.S. puppets left in place and they are under growing attacks and are desperately supporting these counter-revolutions with money and arms and secret U.S. blessings. Saudi Arabia is surrounded by soaring holy wars and torn internally by their own Shia revolt in the oil-rich North East. The U.S. is continually slaughtering Muslim freedom fighters in states like Yemen on the border of  Saudi Arabia by Hell Fire Missiles from its Murder Drones.

South Central Asia is overwhelmingly Islamist, most obviously in Afghanistan where the U.S. has slaughtered the Muslims ferociously. Pakistan is extremely anti-American and more and more Islamist. Every American drone murder of women and children in Pakistan increases the rage of Pakistanis, almost all of whom are already anti-American and admit it even to Western pollsters.

There will be ups and downs for all sides in local areas, especially with vast, secret U.S. military and financial help for counter-revolutionaries and fierce pirates and ideologues everywhere. But the Holy War is growing rapidly everywhere in this vast Muslim region. Obama’s speeches out of all sides of his lying mouth are exposing the total deceits of the U.S. The Great Satan, as Iranian revolutionaries first called the U.S., is mired in a vast quagmire of wars and conflicts it cannot possibly win in the long run.

Western imperialism and its terrorist puppet regimes in this vast region over two centuries have produced an immense, exploding cauldron of rage against the puppets and the imperialists. The people have returned to their Muslim roots to give them hope and strength to endure the terrible wars they must fight for decades to rid their ancient homelands of these imperialists. The U.S. is sinking into an immense cauldron of Holy War against a billion Muslims and is fighting them with mercenary troops who for the most part believe in nothing but their pay-checks and retirement perks. It may even take a century of terrible war, but the outcome seems obvious. The U.S. has already been defeated by tiny guerrilla armies of true believers in their traditional cultures in Vietnam, Iraq, and Afghanistan. They deny and lie about it all, as they do about almost everything now. But the truth is obvious. The U.S. will be defeated if it is insane enough to continue rushing into this immense quagmire of Holy War. -Infowars