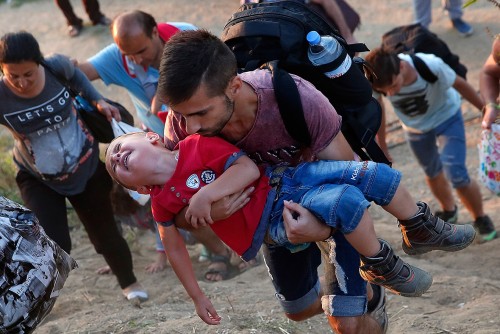 The massive influx of refugees and the tyranny and violence they are fleeing have been the top issue in international headlines lately. The sufferings that millions have been enduring is now transforming into an enormous tragedy.

The Muslim Rohingya living in the Rakhine State of the Myanmar are a heavily persecuted community that suffers from oppression, torture and forceful exile. Since 2012, hundreds of thousands of Rohingya have had to leave their homeland and thousands more have lost their lives. The ones left behind had to board unreliable boats to reach neighboring countries through perilous journeys on the high seas, battered constantly by severe winds and monstrous waves.

When Malaysia and Indonesia decided to open their doors to the Rohingya for one year, of whom hundreds have already lost their lives during their journey towards hope, their ordeal subsided to an extent. However, it is clear that a real solution can be achieved only when ASEAN, the UN and the Islamic world come together to develop a permanent solution for the Rohingya. It is crucial that they make an intense effort to make sure that the conditions that are making the Rohingya refugees no longer exist.

It is clear that the Rohingya are not the only people that are suffering from a refugee crisis. In many countries around the world, millions have had to flee ongoing wars and conflicts, becoming refugees in the process. Syrians currently make up the majority of these downtrodden people, after leaving their homes, families, properties and lives to seek shelter in other countries.

As the Syrian refugees are trying to get to countries that will accept them, they have to put up with the inhumane, discriminatory and brutal treatment of some EU countries. Indeed, in some of these countries, refugees encounter brutal and violent police force and coast guard practices, they are being subjected to ‘push-back’ operations, and in complete disregard of their special circumstances, are being exiled in masses. However, this practice that endangers the lives of refugees, which includes children, is a blatant violation of international laws.

One of the EU countries that violates human rights with the treatment of refugees is Hungary, deploying armored vehicles along its borders, and allowing its soldiers to use plastic bullets and tear gas against the refugees. Slovenia is another such country that tries to stop hundreds of refugees with pepper spray, despite the fact that there are babies, toddlers, women and the elderly amongst them. Unlike those countries, Germany promised to welcome 800,000 and possibly more refugees a year, and therefore is a European country with an admirable behavior towards refugees. Turkey, praised by the entire world for its hospitable, peaceful and embracing attitude, and for its selfless and helpful approach to refugees, has welcomed two-and-a-half million Syrians and has become a prime example in how to handle a refugee crisis. International laws regarding refugees strictly forbid any discrimination against refugees based on religion, language, sex or race. Despite this, Slovakia and the Czech Republic intend to determine the refugees they will accept will be based on their religion and stated that they would accept only a limited number of Christian Syrians; this is another example of a clear violation of human rights and international laws. At this point, it is crucial that Europe, which prides itself with the importance it attaches to democracy and human rights and in treating all faiths equally, takes steps to ensure that EU countries abandon their selfish and discriminatory behavior without further ado.

Europe must accept the fact that the ongoing refugee crisis is not a security issue, but a humanitarian problem. Erecting barbed wires and fences, planting landmines along the borders and subjecting poor people that have already lost pretty much everything to a new kind of tyranny in order to illegally deprive them of their right to seek safe refuge will not solve this problem. The solution is possible only with love, a humane approach, patience and altruism. EU countries should respect the right of refugees to live and approach them with love and compassion; after love, compassion and respect are built, swift political, diplomatic and, if need be, military measures will follow so that the circumstances that created the refugee crisis  can be dealt with properly.

As thousands of innocent people are fighting high seas to reach their destination, debating who will guard the borders and how to prevent the refugees from coming, or making borders impassable through inhumane methods, would inflict irreparable damage upon Europe; such attitudes would lead to moral disgrace  and strip it of its humanity. Those who would simply leave people to die will lose a part of that which is what makes us human; the ability to comprehend the suffering of others and to take action to help such people rebuild their lives. Kicking someone when they’re down is hardly a commendable behavior. Europe should listen to its heart, open its borders, ensure safe passage to the refugees and put an end to human rights violations so that the refugee problem can be solved. The EU countries know very well that the right to seek asylum is a basic human rights and therefore they should immediately revoke any legal regulations that prevent these refugees from settling in the country of their choice. According to the Geneva Treaty of 1951, the refugees should be able to enjoy all the rights in the countries they are based.

Clearly, the European Union, with its population of 503 million, can quite easily distribute a couple of million refugees across the continent with sound planning. Furthermore, it can easily offer them education, employment, the opportunity to open small businesses and assist them in becoming contributing members of the society.

Being indifferent to this crime against humanity, which we are witnessing on an almost daily basis, is clearly wrong. It is important that an urgent action plan is prepared to protect the lives of refugees, to put humanitarian aid programs into action and to take all the necessary steps so that this horrible tragedy ends once and for all.