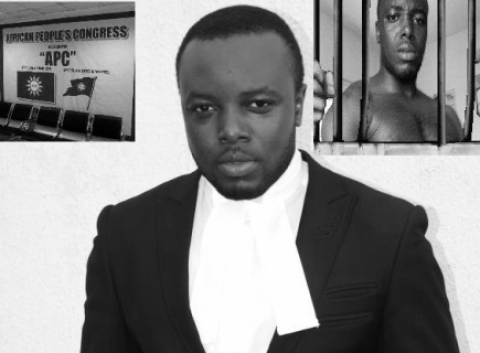 With a tinge of regret in his voice, Mr. Nwokorie Samuel Chinedu, the lawyer who filed the application with the Independent National Electoral Commission (INEC) for the registration of the controversial African Peoples Congress (APC), has spoken of his role in the row.

Nwokorie, who spoke with our correspondent from his hideout in Abuja Wednesday night, said he was hired by Ugochinyere Ikenga sometime in February to file the application – an action which has kept leaders of merging parties battling to defend their emerging party’s identity.

Action Congress of Nigeria (ACN), All Nigeria Peoples Party (ANPP) and Congress for Progressive Change (CPC) have merged to form the All Progressives Party (APC). The proxy “APC” is believed to be an attempt to throw a spanner in the works for the real APC.

According to the lawyer, Ikenga paid him N30, 000 before he filed the papers. The “client” paid him N50, 000 later and gave him a Samsung Galaxy phone after the job had been done.

Nwokorie said he took the brief as a young lawyer eager to earn a living without any inkling of what Ikenga had in mind. He added that Ikenga told him that he was acting on behalf of the promoters of the party.

His words: “Ugochinyere Ikenga approached me sometime in February 2013 to put in an application for the registration of a political party by name African Peoples Congress.

“He paid me an initial sum of N30,000 and later added another N50,000 and a Samsung Galaxy phone after I had filed the papers, with a promise that he was going to settle me after the party must have been registered.

“So there was no way I could have visualize, whether or not there was an ulterior motive in the registration of that political party. I was, however, surprised to see my name all over the newspapers, including the a sample of the application letter I wrote to INEC.

“I wish to let Nigerians know that I am not a politician in anyway whatsoever. I regret the issues at hand and the dimension the entire thing is taking.”

Asked to explain the discrepancy in the office address in the application and his real address, Nwokorie said the address was correct.

According to him, a friend of his works in one of the two law chambers in the address.

“I used the address because a friend of mine (a lawyer) works in one of the two chambers. But that friend does not wish to be dragged into this matter because of the uproar.

“Legal World Chambers with which I filed the application is duly registered with the Corporate Affairs Commission (CAC). I personally registered the firm. But if anyone has any doubts, let them check it out with the CAC.

“Some people are even doubting whether I am a lawyer or not. I challenge them to go to the Supreme Court and check the roll to see whether or not my name is there.”

Nwokorie said he did his first degree programme at Buea University in Cameroun. He did NYSC in Abuja in 2005/2006 after which he proceeded to the University of Lagos (UNILAG) where he got a Master’s degree in International Law and Diplomacy.

According to him, he attended the Law School, Bwari, Abuja and was called to the Bar on February 14, 2011.

The obviously-frightened Nwokorie said he was forced to switch off his phones because he was bombarded with calls.

“I am not happy about the unfolding event because I did not bargain for it, especially as I have been receiving calls from unknown persons and my present boss, whose identity I would not want to reveal for now, is not happy with me. My family is also worried and apprehensive about the entire thing,” Nwokorie said.

Meanwhile, Ikenga has kept telling Nwokorie that he should not bother himself about the heat generated by the action, assuring him that the sponsors of the application would handle the matter.

Said the lawyer: “He keeps telling me not to worry, that I should be a man and that he would handle the matter. He also said that the real owners of the party would soon be revealed to Nigerians.

“Once again, I want to tell Nigerians that I just took a brief as a young lawyer and it ended there. I don’t know the sponsors of the party. The only person I know is Ugochinyere Ikenga, who gave me the brief.

“I got to know Ikenga through a friend. I thought it wise to come out and tell Nigerians the entire story because I keep receiving calls all-day through. My major concern now is my letter head, which is in the custody of INEC.

“My family has asked me to hands off the matter, which is the reason I have come out in the open,” Nwokorie stated.
When our correspondent called Ikenga on his telephone number provided by Nwokorie, he promised to call our correspondent back and cut the line off. He never did.