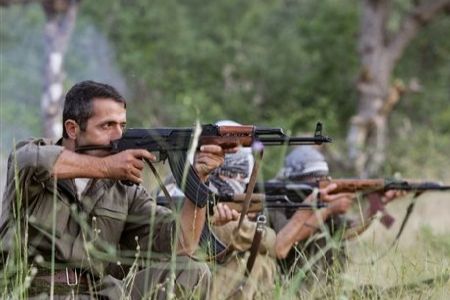 Recent intelligence reports presented the fact that the sway PKK holds over the East and Southeast has increased and thus their oppression over the people living there has strengthened. This fact has become even more obvious with the recent developments that took place. It is almost impossible for other political parties and NGOs to carry out efforts in the region.  The PKK and its extensions have established a control system town by town, village by village, even district by district and thus brought the free will of the people under complete control.  It is a known fact that those who desire to resist this oppression of the PKK are tagged as “agents” and “traitors”, are tried in so-called courts, sentenced to material and immaterial penalties and are martyred.

This situation came into being as the date for the general elections is approaching. The violence inflicted upon the candidates and the voters of other parties during the local elections held on March 30th, 2014 was covered by the media.  Party buildings were destroyed in many cities, party vehicles were attacked, the candidates and their relatives were stoned, even deputies threatened.  It is of crucial importance to take necessary precautions in order to avoid a repetition of the same scenes before the general elections  because it is not possible for our citizens to feel safe and consequently feel able to  reflect their free will at the polls. When people see the pressure exerted upon institutions and respectable people, they are unavoidably  left in a position to elect the candidates imposed upon them in order to protect themselves.

It should  be stated that while the violence inflicted by the PKK and its extensions are quite  open, merely saying “We expect our people to be brave” or “Why can’t some parties enter this region?” is not the right approach. The right approach is to ensure an environment in which our people would not feel the need to be courageous; one in which people from all walks of life would be free to express their opinions in every street of the Southeast. Free and fair elections can be held only if – and when – this environment is ensured.  As long as there is a structure enveloping the whole region, standing on guard in the streets in order to prevent the activities of other parties, preventing these people from entering their districts, “tagging” those who speak or support those people, the priority should be on doing away with the pressure exerted by this structure. This pressure also controls the polls on the election day. The PKK and its extensions harass voters  and “punishes” those who do not vote in line with their demands. For instance, when the AK Party won the elections in the Halfeli district of Iğdır, the pressure exerted by the organization both on the Mayor and the public increased considerably. The Mayor, Reşat Başkara, stated that the PKK threatened shepherds in the highlands, left 12 families homeless after burning down their tents and kidnapped a villager. There are innumerable such examples.

Presently in the region;

– They are sending threatening letters to the candidates of political parties apart from the HDP, with the stamp of the HPG (People’s Defense Forces, the armed mountain forces of the PKK),

– They are forming a system that would make it possible for the organization to control the election polls in  neighborhoods,

– The PKK immobilizes people like polling clerks and plans to recruit their own militants to oversee the polls,

– The sympathizers of the PKK bring people to the polls and thus organize the supervision of the voting process,

–  Senior citizens are forced to vote for certain parties with strict instructions.

In the face of such a calamitous state of affair, stationing numerous police officers to ensure security for the elections in the region would not be sufficient to rule out these pressures;  taking precautions only on  election day would not be sufficient against such an organized oppression system. The justice and the power of the state based on its legal system should make itself felt in the true sense in the East and Southeast, just like it is felt all around the country. Our citizens should not have the idea that they are left defenseless against an armed terror organization and should see that the merciful power of our state is on their side. While taking all the necessary legal and constabulary precautions, an intellectual and scientific response should  be delivered against the intellectual propaganda of terrorists. The Kurds are a decent, well mannered and devout people and they are loyal to their homeland and their state. It would be a grave historical mistake if we hang these brothers of ours out to dry.

Just like it is in every other region of Turkey, the elections should not be carried out under the shadow of weapons in the Southeast either.  If there is the implication of force, it is apparent that the people of the region would be forced to vote according to the impositions forced upon them, not according to their own will, while the PKK and its extensions are still armed to the teeth.  Under such conditions, it would not be possible to regard this election as free and fair.