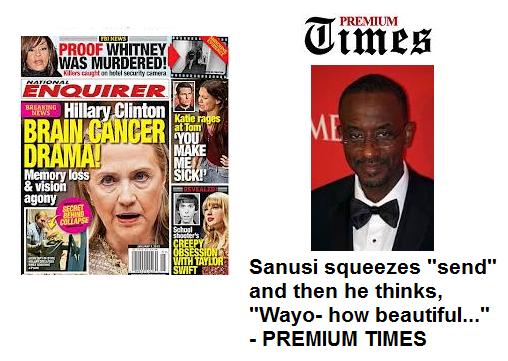 The Premium Times Affair With Sanusi: Love or Lies?

NewsRescue– I am quite disappointed in PREMIUM TIMES. That puts it simply. PREMIUM TIMES, a platform I prior enjoyed, have now brought themselves down to the “National Enquirer,” gossip, tabloid level.

Who read their recent romance story of the CBN governor, Sanusi Lamido {SLS}? Was that not a pathetic read?

Are we meant to be entertained and convinced by the miraculous investigation PREMIUM TIMES claims, God-like in its abilities – able to hear the conversations held between two passengers on a plane with the engine turbines blazing?

Those of us who read the pathetic narration, asked,- was PREMIUM TIMES’ investigator on the flight with them? Where did he/she sit? In front, listening to their conversation? Most likely at the back seat, extending his/her neck forward to eaves-drop on the conversations being allegedly held. The irony, – PREMIUM TIMES just broke news about “Jonathan government spying.”

I resisted the urge to touch this story, because it is irritating in so many ways. Even discussing the PREMIUM TIMES “Breaking story,” is as disgusting as it is writing it, for whoever wrote it.

By the way, the piece was not edited by PREMIUM TIMES educated staff, I noticed they referred to Mrs Yaro as a “he.” Perhaps the writer was considering writing some sort of story alleging that SLS was gay?

Mrs. Maryam Yaro, a married mother of two, an assistant director and subordinate to the governor at the CBN, arrived at Sanusi’s unnamed Abuja hotel, seeking to keep the date and help address his boss’ craving for a kiss. –PremiumTimes

Perhaps the author is someone  troubled by the new anti-gay marriage legislation passed in Nigeria? It’s not surprising then, that this story on morality comes quickly after moral issues have been stamped on by the authorities of Nigeria.

We wonder in this modern age of immense technology; for an investigation that purports to have been on for months and ended exactly one year to the end of the tenure of Africa’s CBN governor 2013:

The guy you had on the plane behind them, eavesdropping, he didn’t have a camera phone or pen?

No munched screen of the text messages?

Nothing? Only a Photoshopped image placing both family people together to make it look real?

I noticed also in the story that PREMIUM TIMES talked about Mrs Yaro meeting with SLS at an “unnamed Abuja hotel,”

…arrived at Sanusi’s unnamed Abuja hotel, seeking to keep the date and help address his boss’ craving for a kiss. *(Insiders say board members, including those who live in Abuja, are usually lodged in hotels ahead of board meetings).
But by the time Mrs. Yaro left the hotel to return to her official desk at the CBN, the duo had also struck out an arrangement to spend the rest of the week together in Lagos.

Forgive me for being so dumb, but if the hotel is unnamed, how did PREMIUM TIMES know they met there? Or is it called,  “HOTEL UNNAMED, Abuja?” That’s an interesting hotel name. Pretty cool too. The perfect name for a rendezvous-spot hotel.

Reading PREMIUM TIMES is now eerily similar to reading the National Enquirer. I wonder when and if ever my confidence level will be high enough for me to read or quote them.

And then, in the same quote above, even though the hotel was unnamed, somehow god-PREMIUM TIMES knew what they discussed in that unnamed hotel, and that while there, not before or after, they planned to meet again in Lagos.

We all know there may be truth to this tale, and there may be some elements of truth in this concoction. But presenting a stupid story does nothing to help Nigeria’s developing media and the role of the media in protecting and bringing prosperity to the masses.

But the fabrications and frank lies to spice up this tale simply ridicule PREMIUM TIMES and discredit their attempt to discredit the CBN governor.

Don’t get it twisted for one second though, I am not one who blindly loves and defends SLS. On the contrary, I view him as having played a western puppetry role in Nigeria, especially since his actions together with Ngozi Iweala were deliberate and anti-Nigerian, January 2012; the fuel subsidy saga. But this does not prevent me from calling filth and slander, filth and slander.

May 16th, when a bomb blew in Buhari and Yar’Adua’s neighborhood and PREMIUM TIMES referred to Boko Haram being from “Yar’Adua’s watch,” we all knowing fully well how Yar’Adua did not tolerate them, killing 700 of them and extra-judicially killing their founder, Mohammed Yusuf; I started questioning PREMIUM TIMES. See:

Katsina, also home to late Umaru Musa Yar’Adua, under whose watch the Boko Haram sect transformed to a terror organization, has managed to remain insulated from the security crises in northern Nigeria. -Premium Times

Nobody really knows what Sanusi is up to at night. But we sure know what PREMIUM TIMES is up to. We’ll see if this attempt by PT sticks. For some reason, I am not betting on it.

Enough of my precious time spent on this rubbish, back to the real issues: Boko haram, Kidnapping, billions lost from Pipe line vandalism, high sea piracy, Al Jazeera sponsoring terror in Nigeria, big government looting and the like.

A lecture I viewed perhaps would be a good listen at this time. It tells how the wrong Nigerians focus on and fasten themselves to the judgement and castigation by so-called morality, while not looking simply for “who has the right skill-set for the job.”