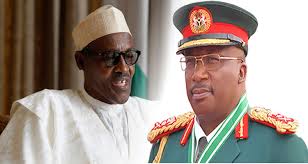 Nigerian, you have by now seen a viral video of Nigeria’s interior Minister, Abdulrahman Dambazau, turning “a DSS officer” into a sobata during a public function. If you do not know who or what a sobata is, it means you are too young and you came to adulthood on Facebook and Twitter. Sobata was the ambulant Ghanaian shoemaker, shoe repairer, or shoe shiner who took care of my “back to school” bata shoes during my primary and secondary school days.  If you were an ajebutter whose hand writing was cursive, you called those shoes “cortiner”. A Ghanaian sobata is a significant element in the social history of Nigeria in the 1970s and the 1980s.

The dust of Kaduna was unfriendly to Dambazau’s loafers. He sits down and the world is treated to yet another tragic spectacle of the dehumanization of a Nigerian citizen by a member of Nigeria’s contemptible power elite. “The DSS officer” cleans one shoe, Dambazau stretches his second leg for the same cleaning operation to be performed on his second shoe. He does not spare even a glance for the “thing” bent at his feet, cleaning his shoe.

That thing at Dambazau’s feet, that thing wiping Dambazau’s shoes to a mirror shine in full public glare, has an identity. That thing is called the Nigerian citizen. Unfortunately, that is the only part of this sordid affair that has transcendental validity: the fact that the Nigerian is a thing, an inconsequential thing in the presence of the men and women of power we generally throw into the patriarchal category of the “big man” in Nigeria.

The dehumanizing power of this Nigerian big man was made evident when the mere evocation of his existence by a junior officer on national TV led to Nigeria’s most celebrated assault on cyber language: dawbliyu dawbliyu dawbliyu sneeze dot sneeze dot NSCDC dot sneeze dot dazzol. To evoke the existence of your Oga at the top in Nigeria is to lose the capacity for speech and coherence and that is the first step to becoming a thing cleaning his or her shoes in public.

It bears repeating: the fact that the Nigerian is a thing thingified by Oga at the top is the only certain aspect of the Dambazau scenario. After this fact, every other thing is sadly and tragically…Nigerian!

Let me explain. You would have noticed that I am putting “DSS officer” in quote when describing the thing wiping Dambazau’s shoes. I am doing that because this is Nigeria. And the first thing to learn about Nigeria is that illegality, abnormality, or illogicality is never an only child. Nigeria is not one to sire illogicality in isolation. Illogicality is always born as one of quintuplets or sextuplets in Nigeria.

For instance, everyone thinks they see a DSS officer because the thing in suit wiping Dambazau’s shoes has a revolver bulging from his side pocket. But nothing confirms that the thing is a DSS officer. This is Nigeria. Any range of illegalities is possible.

He could be a DSS officer indeed.

He could be a police officer not in uniform

He could be an overzealous Dambazau aide carrying that weapon illegally.

He could be Dambazzau’s brother in-law carrying that weapon illegally.

He could be the nephew of Dambazau’s cousin’s uncle carrying that weapon illegally.

We know all of that already. What you often do not admit is that Dambazau’s psychology of dehumanization is a function of your own psychology of self-abnegation. I have been laughing bitterly since I first encountered mass reactions to Dambazau’s savagery. My first point of contact with it was on the wall of a brother who is a close aide to Ekitigate Governor, Ayo Fayose. Supremely blind to the irony of it all, this aide takes umbrage at the situation and condemns the sordid spectacle. An aide, who would gladly wipe Fayose’s anus in public, is condemning another aide for wiping the shoe of his principal in public? Which Nigerian serving a man of power as a political aide would consider such tasks undignifying and beyond the call of duty?

That Nigerian wiping Dambazau’s shoes is you. That is how you, Nigerian, behave in the presence of your men and women of power. Obscene self-nullification because of your men of power is second nature to you. Given the chance to wipe Dambazau’s shoes, practically all of you forming indignation in public will do it to gain access to “those who matter”. This is self-abnegation beyond compare.

The day I left Ake Festival, I couldn’t wait for Lola Shoneyin’s arrangements to get me to Lagos. I was in a hurry. I had appointments in Lagos before catching my flight back to Ottawa. Lola had wanted me to remain in Abeokuta to help her host a certain mutual friend who was on his way to Ake from Kaduna that day. I had other plans for Lagos. As I tried to make arrangements to get to Lagos behind Lola’s back, my friend, Kadaria Ahmed, and I spoke back and forth about my trip to Lagos. Then Kadaria had a bright idea: “why don’t you kuku just wait and hitch a ride to Lagos with your friend?” I thought about it and we phoned “my friend’s” protocol people to let them know that I’d be hitching a ride back to Lagos with him. Arrangement concluded. Then I thought about all I needed to do in Lagos and decided I couldn’t wait for “my friend” to finish his own session at Ake. I told Professor Remi Raji and Remi Ogedengbe to drive me to the motor park in Abeokuta where I chartered a car to take me to Lagos.

I had just shunned a free ride to Lagos in the car of a Nigerian state Governor because our schedules were incompatible that day. When I got to Lagos and told the folks I had rushed to meet that I couldn’t afford to wait for the Governor’s lift because of the things we had to do, they all looked at me in horror, convinced that I needed urgent intervention by the combined deliverance offices of Pastors Enoch Adeboye, David Oyedepo, T.B. Joshua, and Chris Oyakhilome. When he finally caught his breath, one of the friends I had rushed to meet – I had given them an airport appointment – screamed, “Pius I’ve always known that you’re crazy but I didn’t know that you crossed the market already! What is so important about us that you couldn’t wait for the ride of a state Governor? In Nigeria? Ori ogbeni yi ti daru o!” The consensus was that I would have served them better by “connecting them” than rushing to Lagos for my appointment with them.

I didn’t know where to start. I didn’t know how to start telling them that a state Governor’s human dignity is not more equal than their own human dignity. In fact, to the extent that they occupy the office of citizen of the Federal Republic of Nigeria, they should consider their time more precious than the time of the public servant whose ride I did not wait to take. Do you think that if given the chance, those guys would not wipe Dambazau’s shoes in public?

Citizen Tope Fasua is a Nigerian patriot after my heart. I have been working with him on the pan-Nigerian project for a very long time. He is an exemplary citizen. Like many who supported President Buhari’s election, he also got an invitation to the dinner party that was said to have been organized by folks close to Mrs Aisha Buhari to thank social media supporters of her husband.  When citizen Tope Fasua got to the designated pick-off venue where invitees had been instructed to assemble for the bus trip to the Villa, he discovered, as usual, that the Nigerian state had made arrangements that were beneath the dignity of a citizen of the Federal Republic of Nigeria. Because of the Nigerian government’s irredeemable culture of contempt for the Nigerian citizen, they had provided only one bus to ferry the invitees, all important ordinary Nigerians, to the Villa. Tope would have none of that treatment – not even from the Presidency. He exchanged banter with those waiting for the single bus and drove away. In his account of this incident, Tope Fasua also indicated that he had very important things to do.

My admiration of this Nigerian shot through the roof. At every instance of your contact with power, you must always remember that your dignity is paramount. You human dignity as citizen is the number one reason Nigeria exists.

If the Villa can get away with it, she will ask hundreds of you to gather at a point and send just one bus several hours late to fetch you. That is the nature of power. You have to insist on your dignity so that she behaves better.

If Dambazau can get away with it, you will always clean his shoes. Let’s face it, one aide or a handful of aides will never be able to confront Dambazau and tell him to his face that he is the jackass I believe he is. He is probably using his domestic staff for duties that could make him a candidate for The Hague – violating their dignity and human rights. They will never be able to confront him. Only a mass culture of hostility to their psychology of dehumanization will make the Dambazaus of this world wake up and smell the coffee. We have to grow such a mass culture in our daily encounters with the actors of the Nigerian state.

You and I know that Dambazau should be sacked from President Buhari’s cabinet immediately for that scandalous video. But you and I also know that no Nigerian Presidency has ever respected the Nigerian people enough to act on things like this unless it becomes a national scandal they can no longer ignore.

You and I know that Dambazau and the Villa will ignore this video for as long as they are able to ignore it.

Nigerian, the path to your dignity starts with making this issue impossible for President Buhari and Dambazau to ignore.

Until Dambazau is sacked, you, Nigerian, are the thing beneath his feet.