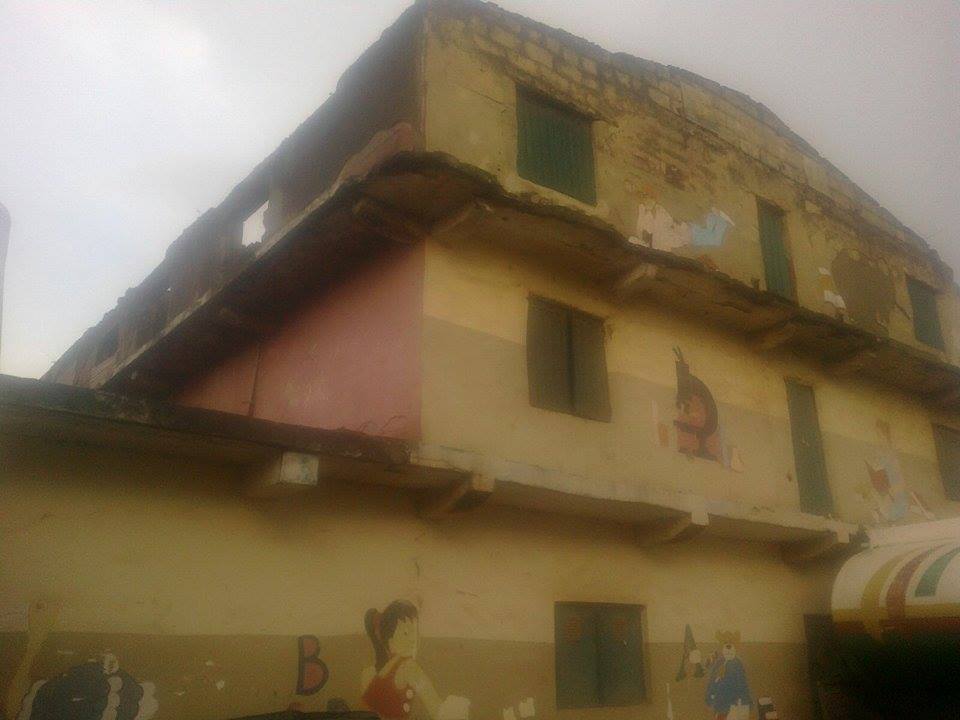 This building is located at Nnamdi Azikiwe express Way near Bakin Ruwa Kaduna South Local Government. The building was a ‘Prostitute Service Center’ before the Religious crises in Kaduna, but during the crises, the house was set ablaze as a result of the crises.

And later the building turned to a thugs jungle, and criminals hidden palace. Presently it became a private school now, combine with private Health school at the same time, without renovation of the building after it was set ablaze.

The proliferation of this illegal and substandard private health schools in Kaduna state becomes a serious problems, where by the schools are operating not even below expectations, but totally at zero services. Because the schools used to employed quacks teachers or instructors to trained the students.

Apart from employing quacks teachers, most of the students are enroll into the schools illegally without following the genuine process. Because some of the students did’nt finish junior secondary school, talkless of to have SSCE certificate.

To my biggest suprise is that, one of my neigbhor who did’nt even finish her junior secondary schools was enrol in one of this private health schools. And the schools usually patronize by Womens. 90 percent of this private health schools did’nt have their own building, they use to rent a house, some of them rent a two bed-room flat and use it as a school of health and environment.

1. Indigent conducive learning environment, for the schools to operate as school of health and environment

2. There is total absence of technical and practical equipment, meant for the purpose of training the students.

3. The schools will produce quacks people, trained by quack teachers who are not qualified to teach them in that field.

4. After the students finish the schools, they will be employed by the same private hospitals, in which they will be working and performing the functions of a “Nurse”, contrary to what they studied at their substandard schools.

5. The proprietors open this schools for the purpose of business, because they cannot afford to obtain a genuine licences from the government, since they cant meet the government criterias.

7. The schools serve as an avenue, for giving young people bad training, which at the end they will be in the activities of abortion.

8. The proliefration of this illegal and substandard private health schools is always increasing, especially in Rigasa and Tudun Wada.

9. This schools enrol or admit people through illegal process, because most of the students did’nt even have SSCE certificate.

10. They are more dangerous and harmful than private primary/secondary schools, because they deal with health activities/services.

11. Negligence of the government for regulating this schools also contribute to the proliferation of the substandard health schools.

– Total eradication of this substandard private health schools, is the lasting solution to stop the menace

– The government should impose a strict criterias for the standard health schools before they allow to start services/operation. If the government are staisfied with their criteria.

– Government should establish a regulatory agency, that will be regulating and checking the services of the private health schools.

– Government should open or establish more health institution, in other to avoid the proliferation of the substandard/illegal ones.

– Srrict punishment should be put on ground, for the people that will breach the government Law for the opening and establishment of the illegal/substandard health schools.

As a result of the continous opening of this substandard and illegal health schools, it contributed to the massive death of people as usual. Therefore as a matter of urgency, the Government of Kaduna state, should put more emphasis in Health sector, to avoid this kind of irregularities.