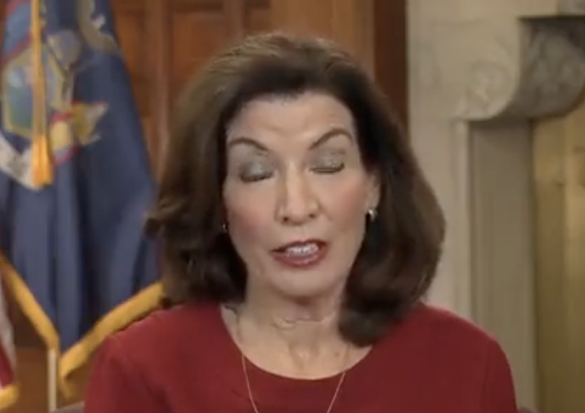 “We think this will avert more people getting sick, and that’s a good news story, and we do hope that everyone really comes around and realizes this is a simple, very minor, uh, intrusion, if you will, if it’s even that,” Hochul said Friday.

“All the children in the state have been wearing masks since the beginning. It’s not that big a deal. It’ll help save lives, keep people healthy, and that’s all we’re asking for. There has been some pushback, but we’re not backing down from this, we think it’s important.”

Governor Kathy Hochul defends NY mandate policy: "It's not that big a deal. It will help save lives, keep people healthy and that's all we're asking for. So, there has been some pushback, but we're not backing down from this. We think it's important." pic.twitter.com/OfysEQZ5xZ

If mandates aren’t that “big a deal,” then why the massive pushback by New Yorkers in the first place?

Maybe it’s because unvaccinated New Yorkers are getting arrested for simply trying to eat at Applebee’s.

#BreakingNews multiple protesters against mandates were just arrested at Applebee's in queens NY for trying to order food at a vaxed only restaurants pic.twitter.com/adZ0qJybwC

Or maybe because children can’t buy ice cream without presenting a vaccine passport.

Or perhaps it’s because the U.S. government is trying to force its citizens to take an injection they don’t necessarily want so they can work and participate in society.

Hochul announced the statewide vaccine mandate requiring businesses to impose a mask policy for unvaccinated patrons last week amid a rise in mild Omicron cases, which is scheduled to run through at least Jan. 15.