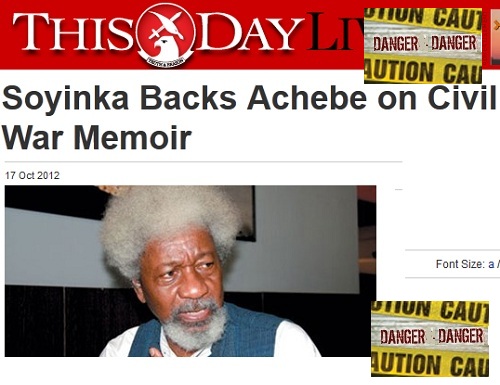 NewsRescue–  Thisday newspaper, a Nigerian popular newspaper, has been caught in a controversy for allegedly publishing a distortion of comments made by Nobel Laurette, Professor Wole Soyinka, a respected Yoruba scholar.

The claim made by the article author, Ike Abonyi, is as quoted:

Nobel Laureate, Prof. Wole Soyinka, has backed his literary colleague, Prof. Chinua Achebe, in the raging controversy over the roles of some prominent Nigerians during the Nigerian civil war. Read More…

There has been a small debate on the internet blogosphere on the role of Yoruba famous leader, Awolowo in the starvation genocide that marked the Biafra secession attempt, orchestrated by late Emeka Ojukwu of Nigeria’s Igbo-land. Writer Chinua Achebe stirred controversy by claiming that Awolowo starved the Biafrans and led to over a million deaths. However documents bloggers dug up, PremiumTimes newspaper published and we also published, relating to the issue, contradicted Achebe’s claim. The documents suggested that the genocide was a result of the Biafra leader, Ojukwu himself denying food from reaching the masses by a road corridor, with a possible aim of creating global sensationalism on the Biafra cause. See: NewsRescue- Documents contradict Achebe book ‘There Was a Country’ on facts of Biafra Genocide

However as pointed out by a famous blogger, ‘Eja’ of the NigeriaVillageSquare, the presentation by Thisday and other editorials is a deliberate and dangerous, unprofessional distortion of the comments made by Soyinka in his Telegraph interview. What may be regarded as dangerous journalism and betrayal of public trust.

Wole Soyinka: I disapproved of commencing the Biafra civil war and expressed this in writing

We crosschecked, and found this to be true. Wole Soyinka suggested a ‘genocide’, of Igbos only in the North, leading up to the Biafra secession attempt, and clearly did not side with Chinua Achebe in claiming that Awolowo caused a genocide. Soyinka did not make any mention in the full transcript below, of the Ojukwu led Biafra secession and genocide. His responses were clearly limited to the events in progression to the secession, and not the secession itself. His comments were not even in relation to the Achebe book or debate, but rather in response to a question about himself and his trials and tribulations, specifically his incarceration experiences.

This is the statement made by the Professor that was intentionally taken out of context. They were made in answer to a question on the dangers he faced as a confrontational writer:

I used my weapon, which was writing, to express my disapproval of the [Biafran] civil war into which we were about to enter. These were people who’d been abused, who’d undergone genocide, and who felt completely rejected by the rest of the community, and therefore decided to break away and form a nation of its own. – Wole Soyinka

Professor Wole Soyinka is expected to publish a statement soon, clarifying his comments.

Here is the full transcript of the interview:

Peter Godwin: Professor Soyinka, you’re not an ivory-tower kind of writer. You are not a stranger to danger, and in fact you’ve been imprisoned on at least two occasions, once in solitary confinement. Can you tell me what that was like?

Wole Soyinka : Writing in certain environments carries with it an occupational risk. When I was imprisoned, without trial, it was as a result of a position I took as a citizen. Of course I used my weapon, which was writing, to express my disapproval of the [Biafran] civil war into which we were about to enter. These were people who’d been abused, who’d undergone genocide, and who felt completely rejected by the rest of the community, and therefore decided to break away and form a nation of its own. Unfortunately, the nature of my imprisonment meant that I couldn’t practice my trade because I was in solitary confinement for 22 months out of the 27, and I was deprived of writing material. So I had to somehow break through the barriers, smuggle in toilet paper, cigarette paper, scribble a few poems, pass messages outside. I was able to undertake exercises to make sure that I emerged from prison intact mentally.

PG : There have been high hopes for some African leaders after they were elected – Meles in Ethiopia, or Museveni in Uganda, or Kagame in Rwanda – but who then went to to show a more authoritarian bent. Are you an Afro-optimist or an Afro-pessimist?

WS : I’m an Afro-realist. I take what comes, and I do my best to affect what is unacceptable in society. I’ve remarked how similar in many ways Mexico is to Nigeria, and to a number of places: we have the same condition of unstructured, unpredictable violence, both from the state and from what I call the quasi-state. Whether the quasi-state is formed, as its basis, of theocratic tendencies, or secular ideological rigidity, you always have forces, even outside the state, competing for the domination of people. That’s what’s happening on the African continent today. That’s what’s been happening in the Arab states and what led eventually to the Arab Spring. Gradually people come to the recognition after decades of supine submission that they are not whole as human beings.

PG : Your parents were Christians, Anglicans, I understand. How has your own religious belief evolved?

WS : I consider myself very fortunate. I was raised in a Christian environment in Abeokuta, but another side of me was very much enmeshed in African values. I gravitated towards what I saw was a cohesive system of a certain relationship of human beings to environment, a respect for humanity in general. I came through a traditional system, where children not only had rights, but had responsibility. In the European world today, especially in America, it seems to be forbidden for children to have responsibilities…

I gravitated towards a deeper knowledge of the orisha, which represents the Yoruba pantheon, very similar in many ways to the Greek pantheon. You have reprobate deities, beneficent deities. I found that more honest than a kind of unicellular deity of either Christianity or Islam.

I don’t know if you’ve been following the news, but just a few days ago some of these Islamic fundamentalists butchered close to 50 students of a technical college. I cannot imagine the religion I was brought up in having such complete contempt for human lives. And yet these are supposed to be the world religions. So that’s why I consider myself rather fortunate that I’ve been able to see what other religions had to offer.

PG : How should Nigeria deal with the Boko Haram, the Islamic militants in the north of the country?

WS : All religions accept that there is something called criminality. And criminality cannot be excused by religious fervour. Let me repeat something I first said at the meeting organised by Unesco a few weeks ago, which was prompted by the recent film insulting the religion of Islam and depicting the Prophet Mohammed in a very crass way.

The first thing to say is that we do not welcome any attempt to ravage religious sensibilities. That can be taken for granted. But you cannot hold the world to ransom simply because some ***** chose to insult a religion in some far off place which most of the world has never even heard of. This for me is a kind of fundamentalist tyranny that should be totally unacceptable. So a group calls itself the Boko Haram, literally: “Book is taboo”, the book is anathema, the book is a product of Western civilisation, therefore it must be rejected.

You go from the rejection of books to the rejection of institutions which utilise the book, and that means virtually all institutions. You attack universities, you kill professors, then you butcher students, you close down primary schools, you try and create a religious Maginot Line through which nothing should penetrate. That’s not religion; that’s lunacy. My Christian family lived just next door to Muslims. We celebrated Ramadan with Muslims; they celebrated Christmas with Christians. This is how I grew up. And now this virus is spreading all around the world, leading to the massacre of 50 students. This is not taking arms against the state, this is taking up arms against humanity.

PG : Is freedom of expression something you see as a universal right rather than as some Western construct?

WS : There are many cultures on the African continent where days are set aside, days of irreverence where you can say anything you want about an all-powerful monarch or chief. It’s a safety valve. It’s a recognition of freedom of expression, which perhaps has not been exercised, and bottled up grievances; this is the day when you express your grievances in society. So there is no society, really, which does not boast some form or measure of freedom of expression. Now, it’s true that freedom of expression carries with it an immense responsibility. Well that is why laws of libel exist – that when you carry things too far, you can be hauled up before the community, and judged to see whether you are right to call somebody a thief, or a hypocrite, and damage his reputation. But unless you establish that principle of freedom of expression, we might all just go around with a padlock on our lips.

Audience member : I read somewhere my freedom ends where your freedom begins. In Europe there have been cartoonists who have mocked the Prophet. Should they limit their freedom of speech?

WS : Religion is also freedom of expression. People want to express themselves spiritually. And they also exercise the right to try and persuade others into their own system of belief. Those nations that say it’s a crime to preach your religion are making a terrible mistake. All they’re doing is driving underground other forms of spiritual intuitions and practices.

If religion was to be taken away from the world completely, including the one I grew up with, I’d be one of the happiest people in the world. My only fear is that maybe something more terrible would be invented to replace it, so we’d better just get along with what there is right now and keep it under control.

The unrest which is taking place as a result of Boko Haram, in my view, has attained critical mass. When a movement reaches that state of total contempt even for universal norms, it is sending a message to the rest of the world, and to the rest of that nation, that this is a war to the end. The president of Nigeria is making a mistake in not telling the nation that it should place itself on a war footing. There’s too much pussyfooting, there’s too much false intellectualisation of what is going on, such as this is the result of corruption, this is the result of poverty, this is the result of marginalisation. Yes, of course, all these negativities have to do with what is happening right now. But when the people themselves come out and say we will not even talk to the president unless he converts to Islam, they are already stating their terms of conflict.